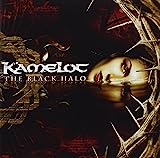 Following Epica, The Black Halo was Kamelot's first step towards modern metal, while keeping their distinct orchestral sound. Some of Kamelot's best masterpieces come from this album, including "The Haunting", "March of Mephisto", and "When the Lights are Down".

If you listen to the album fully and not each of its tracks individually, you never get tired of it.

I could listen to all the songs on this album everyday.

The best power metal album by anyone.

This 16-track masterpiece truly exemplifies Kamelot's touching lyrics along with their perfectly harmonical orchestra and choir. Epica is also the perfect mix of Kamelot's fast paced songs, like "Center of the Universe" or "Feast of the Vain", and slow compositions like "On the coldest Winter night".

Hands down a true master piece and deserving of the top spot this album satisfy to the fullest with a very clear picture of the story being told. My second pick would be Karma followed by Black Halo

From all great Kamelot music until Haven, the power, melodie and especially the poetic lyrics are the strongest in the Karma album. Although Epica and Ghost Opera are very strong. Karma stays on top. Silverthorn and Haven with Tommy Karevik is also strong, but nothing has beaten Karma, then Epica and Ghost Opera yet...

Karma is Kamelot's beautiful transition from old, steady rock to powerful, symphonic metal. Released in 2001, Karma's "Forever" and "Karma" are still some of Kamelot's most popular songs to date.

This is the original Kamelot album, it's when Khan first let his vocals rip, and it's not pandering to the populist sound that some later albums started to transition towards.

By far the best!

It only feels right to put this album last (with the exception of Dominion and Eternity). In my opinion, this late CD was a disaster. No pun intented to new frontman Tommy Karevik (who by the way wrote a great story behind the album), but all the songs sound so similar, and they just don't have the same speed and double-bass sound that they used to. When the Sacrimony single was released, I was led to believe that Silverthorn would be one of Kamelot great albums. Turns out Sacrimony was the only track with the kind of power I mentioned.

Sacrimony ties into my memories it makes me. Torn makes me feel hopeless and reaching out for something. My confession makes me remember the day I hurt my foot and said kiwi was a god. Solitaire reminds me of hiking in the woods with my brothers. In morte ultima veritas vincit veritas in omni re.

A brilliant album! Heavy, dark and theatrical: everything that defines Kamelot.

After The Black Halo, Kamelot kept their new modern rock style, but put a dark mood onto their 2007 composition. You can find some of Khan's best singing on songs like "Ghost Opera", and "Rule the World", where he took a new approach to singing and songwriting.

After a few years of listening to this album, I can finally definitively say that I like it more than The Black Halo. I know, heresy, which is why I was so hesitant to believe it, but there's an emotional power behind all these songs, and a kind of thematic tenderness that's incredibly rare in metal. Haven is about finding beauty in human connection in a harsh and unforgiving world, and while Kamelot can always be cheesy, there's something here that feels incredibly authentic.

The album really reminds me of the heaviness I enjoyed in Karma, with a more modern and refined twist. I also can't help but feel that this is what Poetry for the Poisoned should have sounded like. Overall, a very emotional album in terms of lyrics and a nice balance of energetic and slower and heavier paced tracks. "Fallen Star" "Veil of Elysium" and "My Therapy" are my personal favorites.

I love this album! my personal favorites from this album are Citizen Zero, Under Grey Skies, My Therapy, End Of Innocence, Beautiful Apocalypse, Liar liar, Here's to the fall, Revolution. My last favorite song is Until Kingdom Come from The Expedition!

Although Karma, Epica, The Black Halo and Ghost Opera are still better, Haven is a strong improvement compared to Karevik's Silverthorn.

7 Poetry for the Poisoned

This is'nt exactly one of my Favourite albums from Kamelot, but considering Khan's departure at the conclusion of this album, it surely puts an asterick in their history. After Ghost Opera, Kamelot decided to stick with the dark tone on the songs. It didn't work as well as the previous album, but there are some really good songs on this one like "The Great Pandemounium", and "Hunters Season".

Poetry For the Poisoned is probably my favorite Kamelot album. To each their own, I guess.

Khan's second release with Kamelot, The Fourth Legacy shows their old rock spirit along with the unique orchestral ensembles. The title track is personally one of the best ablum intros I've heard. Other songs like "The Inquisitor" really have an unforgettable melody.

The Black Halo and Haven admittedly come close but this album just stick out with quality + stylistic variety.

Like Poetry... This album is not the best, but for an upcoming 90's rock band with the departure of 2 members, the two new ones (Khan and Casey) really did a great job of putting together songs like "Millenium" and "Once a Dream".

The Contenders
11 The Shadow Theory

This amazing album only just released, and honest to god this is their best work. I can't fathom how mind blowing it is.

Not their best, but definitely their best with Tommy at vocals.

Fantastic album, I can't stop listening to it. Every track is amazing

I am truly saddened that the metal community favors mass-produced songs over masterpieces, and that's what this album is, a mastepiece with great songs. Why should I choose Khan's unimaginative vocal lines over Vanderbilt's great uniqueness? Why would I choose power metal cliches over the majestic atmosphere of this album? That this album is considered Kamelot's second worst is a clear indication there is something wrong with the metal community.

Kamelot's first two albums I like to call The forgotten albums. They both take place before Khan took over for Vanderbilt and Casey replaced Warner. As bad as I want to call this album, I can still find my right to sing along to "Birth of a Hero".

It sure seems like Eternity since this album was released, but I really can't say anything good about it, so lets just say that it was the start to one of the greatest bands music has ever seen!