Vote for you favourite album by the band Kansas. This band has a very diverse and fulfilling set of albums that all have their own nostalgic, great feel. Name your favourite here, and maybe tell us why. Feel like I left a great album out? Tell us why. Rate your favourite and send it to the top.
The Top Ten
1 Leftoverture 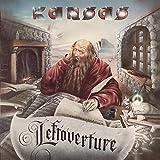 This album has to be my number one because of the shear amount of songs I enjoy on it. It is home to my absolute favourite Kansas song, Miracles out of nowhere. The rest of the songs on the album just build to what is an absolutely incredible album. I must say my opinion is slightly biased in that this was my first record I ever bought by this band; I think the nostalgia alone makes me love this album to death.

By far their best album absolutely incredible from production to superb songs, only just slightly ahead of Point Of Know Return for No1.

I first heard this album on vinyl, back in the early 90's. It just took me on an amazing, joyful ride. Great album.

Quite possibly the best Kansas album (excluding compilations) throughout their 40+ year career. Notable songs include the Title track, The acoustic guitar ballad Dust in the Wind, the extremely underrated Paradox, the political comparison piece that was Sparks of the Tempest, the somewhat eerie Nobody's Home, and the slightly preachy but certainly true Hopelessly Human.

This album is simply incredible. Dust in the wind is a lyrical, and instrumental masterpiece. Picking a number one album is difficult, we are all Kanas fans here, so deciding on the number one is very difficult. I have to say though, personally, I seem to enjoy this album very much so. It is so close to a number one, but I cannot put it over my favourite album Leftoverture.

Where to begin? This album is works so well. No song feels out of place, and every one is a masterpiece. This album feels more connected than some concept albums. "Closet Chronicles" will always be my favorite, but the title track, "dust in the wind," "lightning's hand," "portrait," and every other song are all perfect too.

While Leftoverture has the best song on it, Point of Know Return has overall better and more diverse songs.

Well, this album may be called "Song For America" but it really spoke to me, a Canadian. Great album, has a bunch of really, really great tunes. Of course the title song "Song For America" is absolutely incredible, it is seriously amazing. Thank you Kansas.

This is a really good album... I don't think I have invested enough time in listening to it, to really give an honest review. But as of now, I do enjoy the majority of the tunes.

The final album to include the original line up, and they did not fail to impress. This album has a plethora of great tunes.

This is one hell of a debut album, and it set the tone for the ones to follow. This is an incredible album, and contains some of the bands most instrumentally diverse songs. I actually really like the album art from this record as well, very nice...

The first Kansas in 16 years sees the band create an album in the vein of Point of Know Return & Monolith as well as mixing a more modern sound and succeed brilliantly. This is thanks due to the songwriting by all the members of the band with much of the credit going to newcomers Zac Rizvi and Ronnie Platt, the brilliant musicianship, and stellar production thank Rizvi founding members Phil Ehart & Rich Williams as well as newcomer Zac Rizvi.

Interesting album, but in my opinion it doesn't quiet have the same spectacular qualities the others do. Of course this is simply my opinion, but I just prefer some of the older albums from the early 70's.

I love this album - don't know why it's so low down!

I don't really know why I love this album so much. I don't like it as much as the early 70's albums, but that is likely because I prefer that decade of music (in general). This album is one of my favourites from the 80's and it has the bands 3rd highest rated song on the billboard 100 (right behind carry on wayward son and dust in the wind).

After 21 years, all the original band members reunited to record a new album and it was the best one since Point of Know Return with the standout tracks being Icarus II, When the World was Young, The Coming Dawn, Myriad, Look at the Time, Dissapearing Skin Tight Blues, and Distant Vision.

The Coming Dawn is on this album - one of the best ever Kansas songs and one of the best songs by any band! Icarus II is great too, as is Distant Vision. I would put it in the top 10 for these 3 tracks alone - and it's certainly better than "freaks of nature"!

Although it is technically Streets 2.0, Power brought Kansas back to thepublic with some great songs including the rock masterpiece that is Silhouettes in Disguise, Power, the very 80s love song All I Wanted, the instrumental Musicatto, and the acoustic ballad Taking in the View.

12 In the Spirit of Things

This is a brilliant album. Phil Ehart said once that it was one of Kansas' best. Some fans might say that what makes Kansas great is their unique prog rock music reflected in albums such as Leftoverture rather than this more mainstream AOR style. However, there is no denying this a quality album, well produced and with many great tunes. "ghosts" and "Bells of Saint James"are my fave songs on the album. I would put this in the top 5!

Forgot to mention that the virtuoso guitarist Steve Morse plays on this album (as well as the "Power" album) - another factor which makes this album great!

Well, its an album.

I love this album! It works so well with the orchestra. So good to hear different, orchestral versions of my favorites "The Wall" and "Dust in the Wind". There are new songs on the album too and Steve's vocals are on top form. Another album which should be in the top 5!

16 The Absence of Presence