Ones that reflect what he truly is the most.
The items in this list have been selected by the author of the list for you to vote and comment on.

Consoler Of The Lonely - The Raconteurs 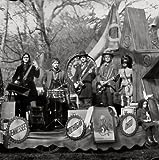 "And I'm skinny as a rail" - You'd better believe it
"Lightbulbs are getting dim" - Intelligence degradation due to sleep loss
"My interests are starting to wane" - Mainly my interest in video games for the time being after seeing how much of a completely overhyped pile of garbage Skyrim was; now I've shifted over more to cinema and music
"I'm told it's everything a man could want and I shouldn't complain" - People automatically assuming that a spoiled suburban life is always a fun one
"Conversation's getting dull" - All people talk about is pop culture
"There's a constant buzzing in my ears" - That buzzing being headphones
"Sense of humor's void and null" - Because I'm one of ...more - xandermartin98

"Words are meaningless and forgettable" - My entire attitude toward life

"All I ever wanted...all I ever needed is here in my arms" - Metaphorically due to my extreme anti-consumerism stance, and also literally due to the way that I always manually carry my food and drink to work with me, often while brutally hiking all the way out to work in the process - xandermartin98

"Please can you stop that noise, I'm trying to get some rest" - Basically me whenever I'm in an area that has a large group of people gathered together

"Unborn chicken voices in my head" - Having nightmares about my own vomit-inducingly disgusting brain-fetish fanfictions based off of otherwise family-friendly franchises
"I may be paranoid, but not an android" - Self-explanatory

"When I am king, you will be first against the wall with your opinion which is of no consequence at all" - Me whenever people don't know how to give constructive criticism and are just complete bigoted jerks like Keemstar; many of my favorite Internet stars such as iDubbbz and I Hate Everything also share that very same sentiment quite admirably with me

"Ambition makes you look pretty ugly; kicking, squealing Gucci little piggy" - Again, me and anti-consumerism could probably legit marry each other at this point
"WHY DON'T YOU REMEMBER MY NAME?! " - If I had a dollar for every time ...more - xandermartin98

Basically my own father's true feelings toward me - xandermartin98

"WHY HAS GOD ABANDONED US? HELP ME" - xandermartin98

Much like Paranoid Android, it's a ridiculously overrated song (probably THE most so of its respective artist's entire discography as a whole, in fact), but it still very clearly speaks astonishingly effectively to me regardless - xandermartin98

As someone with theoretically almost every single sodding fetish on the whole entire face of the Earth (minus inflation/farts and the like), I can VERY bittersweetly attest to this - xandermartin98