Welsh rock band Manic Street Preachers have recently released their eleventh studio album ("Rewind The Film" in 2013), so here is a chance to debate their top 10! 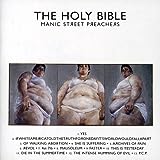 So dark, it's not quite the melodic stuff you'd find on daytime radio, but it is one hell of a masterpiece.

In my top three album of all time! A masterpiece!

Brilliant album. The one they will never top

This is a Truly Masterpiece.The lyrics are fantastic.The best album by Manic Street Preachers and THE BEST ALBUM OF ALL TIME.

Stoic Anthem Rock at its finest, packs a punch with just the right dose of pop sensibility to appeal to a wider audience and establish themselves as real contenders for mainstream subversion.

Album of my youth. Loved it then. Overplayed it a bit still enjoy coming back to it once in awhile

The stadium anthems which brought the Manics so much mainstream success and recognition.

I love this album! Other MSP albums have my attention & awe but GT has my heart, it's like an old friend that knows me well, it rejoices or cry's with me as needed.

Full of amazing guitar riffs, this album is loaded with hot tunes.

A return to the original sound, with bite and venomous attitude.

5 This Is My Truth, Tell Me Yours

Ready for the stadiums, they've written some songs for these occasions...

That record is better than Generation terrorists

6 Gold Against the Soul

Probably the middle-ground, the Manics' second album fuses the punky tunes of debut "Generation Terrorists" with the dark and less-instant style of its follow-up "The Holy Bible".

A breath of fresh air for MSP. More global themes and sense of electrorock. Neat

Why do they hate it so much? Definitely better than SATT

9 Send Away the Tigers

Oh yeah, they're back! - After dabbling with electronic sounds on the previous couple of albums, the Manics bounced back to top form with this record.

Their most eclectic and complete collection of songs with a heavenly lo-fi feel to it. Intravenous Agnostic, My Guernica, Ocean Spray, Found That Soul, So Why So Sad, Baby Elian, Miss Europa Disco Dancer, Epicentre, Year of Purification... Too many fantastic songs on one album. Don't believe the hate for this album, if you prefer fuzzy guitars over pop music, this is your thing.

Love everything by the Manics...so voted for the one I am currently listening to most.

Their acoustic album, with their distinctive sound and likability still there.

Perfect album for a band of their standing

12 Postcards From a Young Man

Pipping the bloated, disjointed and hard to bear "Know Your Enemy" into 10th place, is the Manics' tenth album, which was released in 2010.

I wouldn't call Know Your Enemy disjointed, it's unique in its eclecticism and contains some of their best raw material. In my opinion, one of their best albums. Postcards however is just plastic commercial trash to my ears.