Please be sure to add some albums you believe were the best this year.
The Top Ten
1 Babymetal - Babymetal 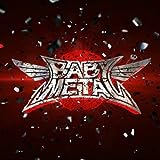 Babymetal are an amazing, fresh new take - not only on metal but on music itself!
I've been a JPop fan and a metal fan for years and hearing my two favourite sounds blended together was amazing! Not only this, Babymetal mixes so many different styles and genres together that it opens the doors to a wider audience, and makes you look into different genres!

The music is out-of-this world amazing, from OUTSTANDING musicians to BEAUTIFUL vocals, I've never experienced such power from music before. Each song has it's own piece of culture and a beautiful message behind it. I know thousands and thousands of metal heads, JPop fans and other genre lovers alike who ADORE Babymetal!

SO glad I got to see them LIVE!

Four guys in a garage love metal and you get a metal band. One idol producer loves metal, works with musicians, song writers, choreographers, and artists to make everything right and you get BABYMETAL. Top it off with the fact that everyone involved has fun doing the performances and making the recordings and you get real metal that is fun to listen to, and doesn't need an explicit tag.

From start to finish this album has everything you can ask for. For me who like all kinds of music, BabyMetal fusion it together perfectly. Before I heard BabyMetal music was just getting to boring for me, whether is rock, metal, death metal etc. But having listening to BabyMetal I felt like my old self when I frist started listening to Metal.

To take 2 genres that are nothing alike and make it work is nothing short of incredible. Add to that the different sub genres thrown in the songs on this album and you have one of the most original and ground breaking albums I've ever heard.

The great thing about music is everyone has a different pair of ears. What sounds awesome to some, sounds like trash to others. For me its about the guitar player and always has been. If the axeman is a killer I'll like the artist and maybe even the band. Hey, I like Johnny Hiland because he is awesome. The guitar player for Men Without Armies is Brennan Dylan and in my opinion totally awesome & one of the all time greats bar none... And I mean bar none. Frankly, I don't like players who rely on pedals and/or special FX to generate their sound because its not the player making his guitar walk but a board full of gadgets, that anyone can use, creating the sound. Dylan wrings his sound out of the guitar the old fashioned way. That said, he does use a DOD YJM308 overdrive pedal to crank it & that's it. So its safe to say he'll never be sponsored by a pedal manufacturer. Dylan writes all the songs which are melodic, catchy & hard driving so I think Men Without Armies totally rocks. The ...more

Men Without Armies is a guitar driven, hard rocking'metal band from Toronto. If you appreciate great guitar playing and I mean totally awesome guitar work, then I think this band will click with you. Brennan Dylan is the kid behind this 3 piece onslaught and is magic to watch if you are into guitar like I am. His songs are melodic, hard hitting & to the point.

This band is so creative and so underrated. They should be in the top 10's

Fantastic album. Sounds like Nergal tried to squeeze in as many awesome musical moments into a 44 minute album as possible. The super heavy production combined with the extra instrumentation like horns create a sound that is so full and malevolent! Best metal album of the past few years and Behemoth's best to date in my opinion

This needs to be number one! It's purely magical and genius! Nothing more needs to be said, there will never be another album that'll even come close to this masterpiece!

5 Blood In, Blood Out - Exodus

9 Once More 'Round the Sun - Mastodon

Heavy. Creative. Innovative. This album is yet another illustration of Mastodon's relevance to the genre and how they continue to push the boundaries of heavy music.

Have always been overlooked by the masses.

Epic album with epic songs such as the title track and Halls of Valhalla! This should be in the top ten.

16 The Serpent & The Sphere - Agalloch

So Walk with me! And this will be higher!

The best album of the year, just this...

This should be higher.

20 Roads to the North - Panopticon

21 The Beauty of Destruction - Devil You Know

23 The Year the Sun Died - Sanctuary