What I like about metal covers is that they are rarely cheap photos.
In general, metal covers aren't very colorful, especially in extreme metal, and dark colors reflect the darkness of metal music and its lyrical themes.

I didn't include album covers by grindcore, goregrind and deathcore bands because for me their music contains more extreme punk than extreme metal and I think these subgenres should stop being attached to metal - not everything heavy, extreme, fast and abrasive is metal.
The Top Ten
1 ÁMR - Ihsahn 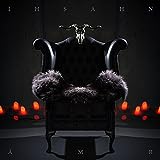 Cover art: Ritxi Ostáriz
This cover instantly speaks "black metal" - not only the prevailing black color but also the depicted objects (goat head/Satan, flames/burning candles in the background, etc.)
Also, the album title (Ámr) is Old Norse and translates to "black", "loathsome".
I might be biased though - I have a soft spot for the black color. But black on a cover always looks classy to me.

3 The Arrow of Satan is Drawn - Bloodbath

Guitarist Anders Nyström explained:
"What are we presenting with this album? Humanity's unfaltering march prone towards downfall. The threat to this world isn't from far beyond the sun, the enemy is right here, within the walls. Only the god of emptiness will survive us all. The arrow of Satan is drawn! "

This cover depicts a moment of the genesis. The album was the final chapter of their conceptual circle (genesis series) in 4 parts/albums. It's an interesting coincidence that the artist who made the cover art in named Orion (genesis is about the emergence of planets, Solar System and beyond it, and so on).

I like the black-grey color of this cover with the red accent in the middle. This cover awakes my imagination. And the music on the album, too.

The album was disappointing but I like the cover.

Lyrical themes: World War I (it explains the album cover; also the band name, 1914, is a clear reference to WW I)

Genre: Blackened Melodic Death Metal
Cover art: Stefan Thanneur
A typical atmospheric black metal-ish cover art, almost black and white (many people would say it's black and white but it's "almost" if we count gray as something different than black and white).

10 The Outer Ones - Revocation

15 Where Owls Know My Name - Rivers of Nihil