Some details on the covers are hidden in plain sight: symbols, cryptic messages, in-jokes, secret love notes, optical illusions, images visible only under a black light, and many more variations of "hidden".
The Top Ten
1 Boston - Boston 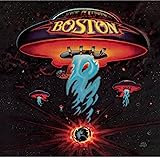 It's not only a spaceship, it's an acoustic guitar turned upside down. Can't see the guitar? Try harder. Actually there are also several smaller guitars that look like spaceships (click on the image to zoom it).
They replicated the same visual trick on the cover of their second album.

Yes, there are four strings of the guitar. Without any bridge. And a part of the headstock could be seen. With three visible tuning keys.

Just behind Eddie's right leg there's a banner reflected in the windows of the Bradbury Towers Hotel International. If you reverse it, you will read this message "THIS IS A VERY BORING PAINTING".
It's with capital letters. The cover was created by artist Derek Riggs. Great sense of humor, Derek!

Ha! I didn't know about this. That's really funny; I love self-referential humor.

1) the interior gatefold depicts a lantern-bearing hermit atop a rocky summit that when held vertically against a mirror reveals the face of a beast.
2) there are 4 glyphs created by each band member - their "personal symbols". For example, drummer John Bonham's glyph contains 3 interlocking rings representing the mother-father-child triad. But when inverted, it's the logo for Ballantine beer! Cheers! And R.I.P. John.

Under the palm trees on the right edge, there's a Shirley Temple doll clad in a sweater emblazoned with the cheery greeting "Welcome The Rolling Stones Good Guys." The "Good Guys" part is on the left sleeve of the doll while the main message is on the chest and the tummy.
Photographer - Michael Cooper.
Several months later The Stones returned the favor (below you'll see how).

Within the lion drawing there are actually several hidden images. The head is made up of 9 faces and the chin is a hula skirt, with the dancer's legs evident below, and so on.

This black cover was created by Andy Warhol and has 2 hidden elements:
1) a skull tattoo with the word "Death" under it but it can only be seen under a black light or when closely examined at an angle. The tattoo belonged to Joe Spencer, star of the 1967 Warhol film "Bike Boy."
2) if you hold the vinyl edition's gatefold cover up to the sun or a strong light, a field of stars emerges.
Because of that, some believe that David Bowie paid tribute to the concept of this album cover on his final album, 2016's "Blackstar". I am not sure about it but can't deny it either.
(click on the image - you'll see the skull tattoo)

7 Ghost in the Machine - The Police

The digital display has 2 visual tricks:
1) it's a computerized caricature of all three band members' hairstyles (Sting is in the middle with his spiky hair)
2) if you hold the image up to a mirror, the figures reveal a devilish message: 666.

Look at the cover at a distance - it's a skull made up of a woman and her reflection.

You can see the Satan's face if you look closely at the canvas in the center of the painting.

Thanks for this addition, Ned. Funeral procession... seems this album cover is darker than I thought.

The Contenders
11 Their Satanic Majesties Request - The Rolling Stones

In the flowers and fabric in the foreground you can see the headshots of the Beatles members - Paul and George are on the left, Ringo and John on the right.
The Stones just returned the favor I described in the Sgt. Pepper's comment section above.
But did The Rolling Stones mean the Beatles were Satanic Majesties?
Both album covers were created by the same photographer - Michael Cooper.

The serial number 3MTA3 read backward (if you read it from right to left) spells out "EAT ME."

If you look closely at the eye there is the Dream Theater logo. Dream Theater has been known to hide their logo on their album covers, and this on was the best.

On the right edge of the zigzag artwork created by Paul McCartney, he wrote "L.I.L.Y." that stands for "Linda, I Love You."
If you click on the image here, you can see it.

Again, the spaceship is also an acoustic guitar turned upside down.

Klaus Voormann, who created the artwork, placed a small image of himself and his name inside of George Harrison's hair (on the right-side of the album cover, underneath John's mouth).

On the back are depicted legs with shoes. On the soles of the shoes is actually Vincent Van Gogh's Starry Night.