Top 10 Best NES Games Not Made by Nintendo

Here are 10 of my favorite NES games not made by Nintendo themselves.
This list is a non-votable list and the content of the list reflects the opinion of its author.
The Top Ten
1 Final Fantasy
2 Contra 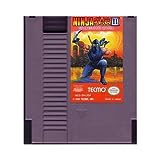 You may be surprised on how high I ranked it, but it sort of fixed the previous installments. Sure there are limited continues, but it's still fun.

Took what's good about the original, and made it better. They also made it harder.

Has one of the best soundtracks on the NES. And the graphics are improved.

Started the series nice and fresh. The game may be ahrd, but that doesn't stop me from loving it.

I know this game is hard for the rather wrong reasons. And it does have a case for one of the worst two-player games, but it also has a case of one of the funnest beat-em-ups (for some levels). I do hate some levels, but they didn't stop me from loving the game.

Nice music along with fluent controls.

This may be a little shocking because this game is extremely hard and does have flaws. But aside from that, I love the music and the Turtles capability. I'm most likely in the minority who thinks that those factors made the game.

One of the hardest games out there, but pretty fair...

Just like Ninja Gaiden, it's hard but awesome...
The controls, yet can be confusing, are some of the best controls out there. It is one of the best games based off of superheroes.