darthvadern So Nintendo Switch has been released worldwide by now. Let's count down the best Nintendo consoles of the 21st century. 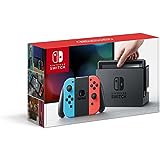 This a cool console cool you can play it on the T.V., or in handheld mode - trains45

Nintendo Switch deserves top spot! The Nintend oSwitch is not only my favourite Nintendo console, but also my favourite video game console of all time! It's easly the coolest looking console of all time, and the coolest in general! It's a hybrid console! It's a great home console and a great handheld console! The only bad mario game in the Switch so far is Mario Kart 8 Deluxe. But let's look at these two games, Mario + Rabbids Kingdom Battle and the near-perfect Super Mario Odyssey, tehse are two games worth your time! And this year they will release the new Yoshi game and it looks unreal (pun intended)! Easly the best console of all time! - darthvadern

This is a cool console I own a wii u - trains45

I have always wanted this, I got it for my birthday and it was amazing! But unfortunately, I donated my Wii U because of the Switch. - MasterHand

People must love Wii u! I have Wii u and I love it! This is why Nintendo hates people. Because they didn't bought Wii u but Wii u got sold 10 million! So this is best console I have

The Wii U is one of the best consoles ever made.

I have always loved the gamecube as a console! I have only three games on it. Mario Kart Double Dash, Mario Party 5 & 7. But there are even more good games! Super Mario Sunshine and Luigi's Mansion! I swear this thing is revolutionary! It was the first Nintendo console to not have blocky graphics! This console is beautiful! - darthvadern

My favorite console of all time, in my opinion

It's pretty much a better version of the DS. The graphics are better. More games. And you can even play DS games on this console! I love that! I got this with Mario Kart 7. This console looks amazing! And it is! The menu screen on this console has some awesomne music! I remember playing hours on this console the first day I got it! How can you not love this? - darthvadern

This a fun console was part of my childhood - trains45

This was the first console I ever got! This is a nostalgic one! I don't use it anymore, since I now have a Wii U. But I still have it. I still remember the day I got this, Mario Kart Wii and Mario Party 9. I remember how much cooler Birdo was in comparision to Yoshi, Wario and the other characters. And also, there's Super Mario Galaxy 1 and 2 on this console! Two amazing games! And there's also Mario Party 8, another great game, this console is amazing! It was also the first console to use motion controls! - darthvadern

This a good console I remember playing a ds lite - trains45

The DS was my first gaming system ever! - MasterHand

The Nintendo DS is pretty much a step down from the Gamecube. This console has so blocky graphics it looks like the N64 compared to the Gamecube. It's a good console but this was AFTER gamecube, a console that didn't have blocky graphics. It also lacks a round control stick. The screens are two small also. And the only interesting games in my opinion are MKDS, NSMB and SM64DS. Just my opinion. - darthvadern

I mean it was a handheld. So hardware technology for portable consoles wasn't as advanced as home consoles. Even the PSP which was around the same time had "blocky graphics" - cjWriter1997

I have never owned this. But I have Mario Kart Super Circuit on the Wii U virtual console, it's a good game. And I think it's a cool console. But most games aren't that good in my opinion. Super Mario Advance franchise are just ports of earlier Suepr Mairo games, these these ports aren't any better, the soundtracks sounds like something you would here when you're about to faint. It's a good console though I guess. - darthvadern

This a cool 3ds I remember playing it - trains45