Now what does a roguelike mean? Well roguelike is a video game genre in which you will die a lot but every time you die you will progress a little further and further. On your way you will collect upgrades, medkits and all sorts of stuff to make your last even a couple of seconds more then the previous attempt. So yeah if you don't like dying a lot or grinding then these games aren't for you. For the rest of you though... please enjoy my list.
The Top Ten
1 The Binding of Isaac: Rebirth 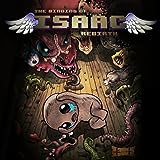 Now a lot of you are gonna hate me for not putting this at the number 1 spot but I have my reasons so shut up! Anyways in the sequel to Binding of Isaac you play as (unsurprisingly) Isaac as you are back in the caves to explore, fight messed up creatures and more. Now don't get me wrong this is a solid game but the thing is (and this a personal issue) I am not a fan of dungeon crawlers and this is exactly what this game is. It's going in caves, fighting bosses and winning upgrades and there's nothing wrong with that,it's just that it's not my style. All though it's still a pretty kick ass game.

This game is almost pitch perfect. The best way to describe this game is murder anything that moves simulator. It has nice graphics for an indie game and it's just fun to shot things. On your way you will get upgrades for your weapons and (if you're lucky) even unlock a new character (there's about 9-10 of them. 4 are unlocked at the beginning). But don't think for a seconds this is an easy game. This game will kick your ass and then some but it's still very fun to play

An free internet game was remade for a price and it is available on Steam for just 14 dollars, which is extremely expensive for a game that's basically an HD rendition of an free to play game that you can download on the internet. But despite this Spelunky is still fun. It is like the best Indiana Jones game without having anything to do with Indiana Jones. It's complex and simple at the same time.

At this point everybody knows about this game. The space menagment game that won numerous awards and was on many people's top 10 indie games of 2012. But there's a good reason for this: The game is just that damn good. Seriously I have never seen a triple A game in recent years that's as complex as this little indie game made by a small company. It's fun, it's addictive, it's frustrating but not enough to stop you from playing... it's just fun and extremely strategic to.

It has the word rogue in it so you know what you are in for. In this game you play as a dynasty of knights and each time one dies the other one takes over. This is the epidemy of a Rogue like. It has extreme but balance difficulty and it is of course very addicting and fun which is good enough for me

It was in my top 10 best survival games and here it is now in my top 10 rogue-likes. What else is there to be said about this game that hasn't been said already. It looks good, it sounds good, it's chalenging and best of all: it's atmospheric.

One of the rare FPS rogue-likes Delver is absolutely fantastic. It has elements of The Binding of Isac, the rogue-likes of old and even some Legend of Zelda. It's the perfect mix for an almost perfect game.

This may piss off a lot of people but quite frankly I don't give a care. This game was incredibly panned when it first came out and I don't understand why? It has great graphics, perfect atmosphere and some well thought out puzzles. If you hated it because you died a lot it's not the game's fault, it's yours

When I first saw screenshots of this game I was less than impressed. I thought this was a cheap cash in on the rogue-like genre but when I got to play it I needed to hit myself in the face for judging this great game. So what is Heavy Bullets? Well in this game you have a pistol and bullets that are, you guess it, very heavy. So heavy in fact that when you shoot your enemies you have to go on the place that the enemy died and pick up the bullet. This mechanic is brilliant but it's also very cheap since in the time it will take you to pick up the bullet somebody else will kill you! OH by the way DID I MENTION THAT ONE SHOT GETS YOU KILLED! Regardless of how cheap and frustrating it can sometimes be it's still really fun and well worth it's asking price.

Pokemon Snap is a classic roguelike made by the chinese in 1998. It is unforgiving and brutal as the cart you are in marches along regardless of whether or not you got the perfect shot of a rare legendary pokemon, in which case the level must be started all over again. If you are ready to absolutely pull your hair out through pure frustration, this is the game for you.

Never have I played a game so frustrating, so rage inducing and yet so damn fun at the same time. This is sorta like an weapon simulation type of game where you have to shoot generic projectiles but the twist comes in the weapons. They can break, get locked and all sorts of frustrating things that prevent this game from going any higher then number 10 on my list. But the frustration is part of the fun so if you want to get yourself tortured go right a head and buy this game,if not then stay far away

Guns: the game. Everything is themed around guns. To a comical degree.