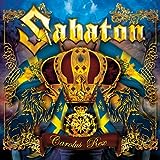 Every song is outstanding. Definitely top 4 for me

Very Good, They have had multiple Albums pertaining to World War 2, So its nice to see an album on The Great War