Top 10 Sega Dreamcast Games You Would Most Like to Rate

The Sega Dreamcast was Sega's last console in the market business. Dreamcast had done well in its early stages, but once the PlayStation 2 came out it was all but over. Even in its brief existence, the Dreamcast gave us some great franchises that would go on to produce for the other three main console brands overtime. With that said let's go back to the glory that is the 6th gen.
The Top Ten
Soul Calibur 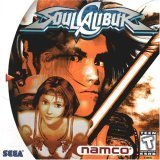 At the very top would be the games arguably biggest hit on the console itself and that is Soul Calibur. Technically it is the 2nd game in the franchise behind Soul Edge which is basically the other element in the series you find out about. It has since garnered a lot of best of all time lists. Original story, and fighting mechanics. Soul Calibur indeed remain as one of those classic fighting games that is a must try for anybody that likes that genre. 9.3/10

Well... we finally have a Trilogy of Shenmue. Going back to where it all started. Yeah the voice acting was not that good. It did play great for its time though as a Sega license. It was one of the first open world type games where you could go roam around which other games after this have done since. A underrated aspect this game doesn't get the credit. 9/10

This is another one like Power Stone where it was popular in it's time, and everybody wanted their own type of spin to it (SImpsons most notably). The idea is pick people up, and quick get to the next one over and over until time runs out. Very challenging, and there aren't that many games like this with this time limit idea where it's actually executed correctly. 9.3/10

What is considered one of the greatest underrated gems of all time not everybody has played. Skies of Arcadia is one of those games even if you really aren't a super RPG goer this is one to recommend for anybody for sure. 9/10

Bigger and better then the first with over 56 Marvel and Capcom characters and the introduction of the 3 on 3 tag team mechanic, 9/10.

A very good Sonic game that is very flawed in some aspect than others. I am able to get past those than in other games after it. Spawned a sequel, and that was alright. Seemed like Sega had a tough time getting back to it's old routes after this game as the timeline of the fans would indicate. 7.5/10

While not entirely a Sega exclusive it sure does feel like one to me. It may not age all too well now. It was a step up from the first title for sure. It's got the fast pace fighting style where it's easy to get the idea you mash a combination of buttons right from into the action. It is the standard of what I like about the Dead or Alive series. A fun right outta the gate fighting game where you can sense where the storylines pick up dynamics between all of these characters. 8/10

While I have more founder memories of it's cool sequel. This is the one that came out first. A very original skate and spray type game with cool cel shaded art style. Why can't there be more games like this? Just picture the idea of a futuristic Tokyo (or Japan) being overrun by corruption and that's the world of Jet set in a nutshell. 8.6/10

When this game came it was a big hit for the console among the others they had at the time. It got a sequel, and a crap ton of clone in it's way. While it's not the most known set of video game series out there. I do feel the originally of picking your standard 4 characters is cool, but after awhile what if they expanded it with more option was mainly my one con. It's a fun and replably game, but that is my one drawback I can't overlook they could of packed into more expanding like it's sequel didn't do much either. 8/10

This was actually one of the coolest aspect about the Dreamcast was that everybody credits Microsoft for the Xbox Live sure, but it was Sega that was actually ahead of its time testing this out before everybody else had that idea when Internet was slowly making its waves years later. When this game came out it made me think how much of a fanbase there is for the Phantasy Star games in general. 8.4/10

The Contenders
The House of the Dead 2

The Typing of the Dead

One of the strangest games ever made. So weird that Leonard Nimoy does voiceover for this game in particular. Seaman is one of those games I recommend you smoke up well because you have no idea what to expect until the game decides to taunt you with random sayings. Would you like to raise this dementedly terrifying nighting fuel looking fish on the screen? The answer never again. 3/10