In case you don't know, a third-party game is one not made by the company that made the console it's on. So don't add any Nintendo games to the list. 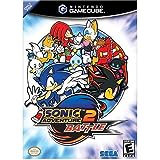 Just download it on your Xbox or play station console for 10 dollars, then download it's multiplayer expansion for $3. It's way cheaper than if it were on wii u. And yes, it has been my favorite game for ages.

The chao garden would be so fun on the Wii. U, they could add online karate and racing multiplayer

Looney Tunes Back in Action

This game is Terrible with a capital T!

I would play it for hours -

I wanted this game becuase I really liked the Monkey Ball franchise but I never got it. This would be a great way to finally play it.

Pinball Hall of Fame
Billy Hatcher and the Giant Egg

You know Sobic Riders is for the PS2?