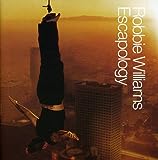 Great album, so many great songs. Come Undone, Feel, Monsoon, Sexed Up, Me and My Monkey, Hot Fudge, and Something Beautiful. All so catchy and many underrated.

The best album I have ever bought.

Has all the great songs on this album, it should be number 1

I love these type of electronic songs

Sing When You're Winning

I love this album - deep, emotional and heartbreaking - except for Candy of course which is the odd song out.

Similar to his older albums

I've Been Expecting You

Although I think Escapology is number 1 I think this is number 2. Great lyrics, great music and Robbie playing instruments which I wish he should do more! Ghosts is one of his greatest songs, random acts of kindness is brilliant and a place to crash should've been a single!

Excellent album. Lyrics, music all round more mature better album than the rest. Escapology 2nd and I've been expecting you 3rd. Although I do think Take the crown will be up there!

Great mature album. And in my opinion his best

So underrated - but there were some brilliant songs here.

Some of my favourite songs are on this album

Life Thru a Lens

His first solo album and it seethes and bubbles with anger and frustration.

I love you and your voice - I will be waiting for your next solo album.

The fourth best selling album of 2013 in the UK

Robbie STILL at the top of the pop peak

The best swing album ever produced

The Contenders
Under the Radar Vol. 1

I love this album. He released it with no promotion and you can only buy it from his website.

This album is his best yet

Swing When You're Winning

Definitely. He does this genre so well. And he looks good in a suit.

All his albums are so good

This is the best album.

The Ego Has Landed

Such a great entertainment show, with a great flow showcasing Robbie's talents and writing. Lots of heart and lots of fun! Some of my favorite songs ever. Taught my class 'Love My Life' and everybody loved it. I'd rate this up in the top, maybe just under Escapeology.

This has to be in the top 3! Without a doubt his best album since Escapology. Love all of the songs, Mixed Signals, Best Intentions and When You Know being my favourites.

Should be higher underrated album

This album should be number 1 🥇

One of best live albums ever recorded

In & Out of Consciousness: Greatest Hits