This list is somewhat inspired by darthvadern's "Most Unoriginal Mario Games" list. With that being said, let's get started and get this over with. I'll be excluding Sonic games like Sonic 06, and Sonic Forces for this list because they offer a different and cool story. 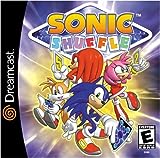 SEGA tried to make a series that was more well selling than Mario Party. - iliekpiez

A bad Mario Party clone... that sucks at being fun or something even worth coming back to.

Because the Dreamcast failed :( It was an ok system... and this is a horrible game. - LightningStrike

A mobile app game, that suffers from the same clichés you'd expect and offers nothing interesting at all.

Almost as bad as Sonic Dash... and again not very interesting or original at all.

Wait until you play the modern version on mobile.

I don't think it's unoriginal(Sonic Drift is more unoriginal in my eyes), but it still sucked regardless.

Welcome to sonic's schoolhouse in education and learning. That's me! - LightningStrike

Aka one of the original Baldi's Basics in Education and Learning, without the jump scares and fourth wall breaks. - IceFoxPlayz

Not to mention this game had the Sonic movie event multiple times.

This game is basically Sonic R 2.

You mean Sonic Forces Speed Battle. The scoring system is horrible though.

It's about as original as a average mobile game... AKA not original at all.

The actual version is better

It's basically just another Sonic Pinball game with a different title...

Calling any racing sonic game a mario kart ripoff is like saying Call of Duty is a wolfenstein ripoff. - B1ueNew

It's literally a Mario Kart rip off... for Christ's sake.

Not out yet. But I will say I'm not so interested as I was SART. - Drawbox

Other than being edgy, it doesn't really play that different a average Sonic game... also it's not really that original to be honest.

Who the hell thought that a Sonic pinball game was a good idea?! And it's not any different from your average pinball game... but honestly Peggle is way more worth your time than this trite garbage.

A fighting game that lacks any originality at all... also who the hell is Bean?

It feels a bit too similar to Dr. Mario for my liking...

For a Mario Kart ripoff its actually pretty good. - egnomac

Actually, Mario kind of ripped of the whole "crossover" concept in MK8. This game is actually pretty good, even if it takes inspiration from Mario. - Drawbox

One part Super Mario Galaxy, one part Sonic X-Treme, with world themes copied from the New Super Mario Bros games (at least games like Sonic 06 tried to have their own identity with the levels). - SuperSonic17

This is an ACTUAL Mario clone, not even SSASR was this unoriginal. - Drawbox

I tried to add that to the list but it wouldn't let me for some reason, when I was making the original draft.

If Episode 1 was okay, then this game is horrible. - Drawbox

I don't like it but it's not unoriginal - iliekpiez

What's unoriginal about it?

This is a good game. - B1ueNew

21 Sonic the Hedgehog 4: Episode I

Copies gameplay from the first 2 games... and feels rather stale.