2018 brought us some jaw dropping album covers. Jaw dropping for two reasons: while we got stunning cyberpunk landscapes, wonderful color compositions and beautiful outfits worn by the singers, there was also a certain amount of artworks that were... “special”. Many lists compiling bad album covers focus on concepts that are outdated, unoriginal, or, for whatever reason, too cinematic. But this isn’t what this list is about: these covers are absolute disasters.

Since I know what you have in mind, let me stress one thing: if you like the artist or not, or if you think they are good looking or not overall is absolutely irrelevant. Weird facial expressions, bad styling or unfitting poses can be judged, but an artwork shouldn’t be here only because you think the person on the cover is ugly per se. That’d be quite disrespectful, and we don’t want to be that, right?
Also, you are judging the quality of the artworks, not the music. You don’t even need to have heard the album to have an opinion on its cover.

That being said, let’s have fun with these monstrosities!
The Top Ten
1 Medium Rarities - Cattle Decapitation 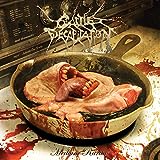 This band is definitely the most misunderstood band ever.
1) the band’s premise is not brutality itself, their premise is animal rights
2) their songs protest the mistreatment and consumption of animals by putting humans in the situations that animals are subjected to
3) this cover depicts what I said in 2) - "putting humans in the situations that animals are subjected to". All their covers depict this same message.
Yes, it's cruel what humans do to animals. I can't deny it. But I'm no vegetarian so I have mixed opinions on their message about the animal rights. However, I understand their viewpoint. Band members are vegetarians and their passion isn't fake. Maybe the band believe that humans will stop killing and eating animals if humans get shocked by such images.

Some pictures don’t need to be commented on. I’ll still do it. I get the idea this band’s premise is brutality. Naturally, their album covers are very violent, too. But really, out of all body parts they could sever and fry, why choose such an unaesthetic on? A whole head or the tongue alone would have done nicely, but such an random part of the face, the mouth with some bones and flesh around it, along with tongue and teeth, doesn’t just look repulsive, it also makes no sense for a cannibal to prepare this particular piece of meat and bones.

That's the type of stuff that gives me nightmares

What is that! God I shouldn't have come here.

I don’t know where to start here. It’s a giant baby with red eyes that has a snake coming out of its mouth, sitting on top of the world which seems to be on fire. There seems to be confetti at the bottom left. On the right, there’s a way too bright light that distracts from all the other stuff going on. Apart from the ridiculous, random idea itself that only leaves you wonder what they were on to come up with it so you can avoid it at all costs, it’s also horribly photoshopped on top. - Martin_Canine

Recently in the marketing department...
"The album title has something to do with hearts - let’s make the artist look like Cupid! No problem, just sloppily cut the rapper’s head out with a pair of scissors and glue it on top of a baby’s body. Still doesn’t look close enough? Let’s add a few gift arts, one of an arrow that we put in the baby arm and one of a broken heart (fits the title, but not the premise of Cupid, who is supposed to do the exact opposite of making your heart broken). Oh, we also need people he’s aiming for. Let’s google a man and a woman, one facing away from the camera and one covering their eyes so they won’t sue us and cut them out. And what about the sky? Vivid blue colors are out dated - let’s make it grey and misty!"
Also, Kodak Black’s expressions don’t match the overall scene at all. I mean… that’s how you look when you aim? He looks bored to death. - Martin_Canine

With some very rare exceptions, I never liked album covers that are just photos (especially photos that are bad) - Metal_Treasure

At least he still has some Papa Franku still in him... - MusicLover132

Okay, it’s from the guy formerly known as Filthy Frank. It is quite possible that it is this blurrily shot at the most unfavorable angle possible with the most unaesthetic facial expression imaginable on purpose, with red eyes and his hair covering his ear so it looks like a goblin’s, but… the album isn’t comedy. It’s a pop record that takes itself seriously. Maybe it’s supposed to appear like a normal picture, like out of everyday life. Intentional or unintentional, out of all your private photos, this is the one you'd least pick as the artwork for your album. - Martin_Canine

Sometimes I think they do this on purpose. Okay, I get the idea. He's supposed to look all natural and deliberately not set up. And I admit, when I wake up in the morning I look similar - but that's the time of the day I want as little people as possible to see me. Messy hair, no make up, these still sleepy eyes, absent minded grin and... why is he naked? The random water drops and amateurish illumination don't make it any better. The back of the CD, showing Lil Xan's melancholic face in a close up in black and white comes much closer to a natural looking photo that is also suitable for an album cover. - Martin_Canine

Lil Xan looks like he’s just woken up. He’s yawning, and has a bed head.
- TheDuttyGyal

Can you have a cover artwork that’s any more contradictory to the album title? There’s no blame to put on the woman on the cover, she does an astounding job keeping a straight face. But her hairstylist must have confused the photo session with his side job in an ice cream cone factory. Apart from that: what does she do with her left hand? Using the force to prevent the hairstyle from falling apart? - Martin_Canine

"Hey… hey buddy.”
"Yup? "
“Let’s photoshop our heads onto two already heavily photoshopped, unnaturally shindy (sweaty? ) female bodies.”
“What the…!? Why would we do that? ”
“Because then we’re… - wait for it -...head over heels! ”
And the world started laughing. - Martin_Canine

Okay, I have no idea who this guy is, and he doesn’t even have a Wikipedia page (but apparently enough music to justify a compilation), but wow, does this look cheap. It looks like what my uncle was capable of crafting as a homemade postcard around the turn of the millennium. The photo looks anything but professionally made, and the background is most likely a stock screensaver from Windows XP, along with the pre-installed fonts. Also, he stole those sunglasses from Cyclops. - Martin_Canine

I thought Miley Cyrus was done with this... - MusicLover132

I know what you think: “Vanessa Mai’s “Schlager” had an almost identical cover, just with her lower lip instead of the tongue, and you commented on it positively. You are biased! ” You are right, she had and I did - but no, I'm not biased. Mai's cover had a purpose: injecting new life into an overly old fashioned genre, and such a youthful, modern thing as a lip tattoo was a clear statement against the clean cut image of schlager. What’s Machine Gun Kelly’s excuse? Also, she just slightly pulled her lip down, and didn’t push her saliva drenched wet insides against the camera while showing off her grillz, causing her mouth to be open in an unnatural fashion. - Martin_Canine

Blac Youngsta is just a guy who sounds like Yo Gotti, looks like Jay Rock but makes terrible music...

At least she has clothes on, unlike Mad Love The Prequel.
- TheDuttyGyal

Another butt album? How many of those do we need? -_-

This artwork is the prime example of what a big role proper illumination plays in the creation of a cover artwork. The premise is mostly okay: artist to the left with his face right where it immediately gets your attention, title and name in the focus, clear overview over the cell including a prominently placed barred window, and an expression to underline the menacing prison atmosphere (the middle finger may be too much). But does it look like a professional photo at all? Nope. Everything is way too dark and stale compared to the uber bright window, in addition to the fact that it all looks very much like made out of plastic, probably a result of some photo editing program which I doubt is actual, official version of photoshop. - Martin_Canine

This had so much potential. The yellow hair, teal background and black and white chequered outfit make a dazzling, surreal composition. I just wish they had waited until Cardi B took the chewing gum out of her mouth. Really, this ruins the entire picture. What is this expression trying to tell us? - Martin_Canine

17 Eat the Elephant - A Perfect Circle

It looks like a weirdo eating an octopus. - DarkBoi-X

"Hey, I am an urban hip hop / RnB artist who just released a number one song that was so successful it became one of only a handful of tunes with a diamond certificate in Germany and whose appeal consisted of a mix of the relatable feeling of drowning your loneliness in shallow relationships and a certain poppy catchiness. Hmm… what should I put on the cover of the album that contains the song? Oh, I got it! Let’s forcefully patch together every cliché of an 80s hard rock record, including a steel font, all devouring flames, dangerous lightning and a guitar screaming “Rock! ” with its sheer design (which, as far as I remember, isn’t heard once on the album)! Oh, and of course, I have no eyes on the cover! Brilliant!”
Okay, as a homage, it might get a pass. But it still is both trying too hard and unfitting for the kind of music you get.

Okay, my opinion on this group doesn't matter. But they had 9 chart topping albums in Germany, 8 in Austria and 5 in Switzerland. They can't tell me they don't have enough money for a professional photoshooting and therefore need to always clumsily grin into the camera in front of a greenscreen that is later replaced with some stock image found on postcards. Really: this is the best album cover they released in years - and they all look pretty much the same! - Martin_Canine

Looks like “TESTING” is a world of A$AP’s Creation. Also, his creation is garbage. And if it is in Testing now, it will be in testing for a Long time. I have no words for this album.