Not everything here is my opinion and I have not listened to everything, I only added entries to create this list. Just add what you think are the worst albums of 2021!
The Top Ten
1 Life Rolls On - Florida Georgia Line 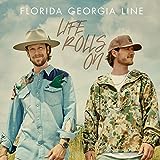 Painfully generic as you may expect. Most ballads are too sappy, some songs mix country and rap in the most questionable way possible and the lyrics are full of obnoxious clichés in modern country music. Also, can they just stop saying "Yeah baby!" at the beginning of each song or between verses?

Should be one. Florida Georgia Line is so bad they are in Blood on the Dance Floor of country.

It's Florida Georgia Line, I mean come on... what do you expect?

I actually liked this one, but I understand it's not for everyone

I think Sputnik Music describe it really well: "Every song layers Levine's singing/clumsy rapping over the most cringe inducing trap beats, and most of the time he sounds like a middle-aged stepdad trying to sound "hip" to get in good with his stepson. It's transparent cultural and trend pandering, and even when Levine adheres to his bread and butter, the melodies are more vanilla than usual. "

Album is the bona fide definition of Maroon 5's constant ambition as the trend followers they are. Taking popular pop sounds and beats and stripping them to the bare minimum. Following the recent uptick in redistributing deceased artist's demos by slapping them on new tracks, of which they do unceremoniously not once, but TWICE in their 12 song catalogue. Red Pill Blues was the diagnosis of Maroon 5's stardom nearing its end, and Jordi is the shambling corpse that remains.

This album is a snoozefest from start to finish made by a band on autopilot who forgot how to pull off a decent pop song. The guests on the album are only here to save songs from being a total bore and to compensate the lack of ideas. Heck, even "Girls Like You" and "Memories" are better than any song on this album. I liked Maroon 5 back in the 2000s and early 2010s but now they're just a male version of the Pussycat Dolls and have lost their mojo. I guess it's time for them to hang it up so Adam Levine can go solo.

Boring and lifeless with nothing interesting about it. Also, those posthumous features from Juice WRLD and Nippsey Hustle felt so wrong. Beatiful Mistakes and the Jason Derulo song are the only good ones here and even then they're a 6/10.

3 Music - Songs from and Inspired by the Motion Picture - Sia

The soundtrack is just as lifeless and offensive as the movie itself. It features some of Sia's worst songs, rehashes several melodies and beats from Sia's previous hits and Sia's vocals are more ear grating than ever. If you don't want your brain to shut down, don't listen to this album!

Very disappointed to see what's Sia has become. She used to be a talented songwriter with incredible vocals. Now she's turned into a caricature of herself. She fell from grace so hard.

I don't care for what Sia is doing these days. So sad.

4 Welcome to the Madhouse - Tones and I

This album is a strong contender for worst album of the year. Not only Tones and I's vocals are extremely annoying, but it also has some of the worst pop clichés in recent history, most songs sound all the same and some songs even sound unfinished. Let's hope she fades into obscurity and takes singing lessons (or just stops singing).

This album shows that she has no talent. I don't know why people find her unique in my opinion

The most frustating things about her is that she (probably) can sing with a normal voice but choose to use that voice.

Would be a lot better if someone else sing.

Disappointing posthumous album that is overshadowed by its star power. I hope this is the last posthumous Pop Smoke release we'll have.

Such a disappointing return for Logic. Although there are a few okay songs, the rest is just incredibly bland, corny or just plain forgettable. Maybe he just shouldn't have come out of retirement.

8 Nobody is Listening - Zayn

What an abomination of an album! It basically sounds like 6ix9ine mixed with Blood on the Dance Floor and Limp Bizkit's worst songs. Not only the vocals are one-dimensional and headache-inducing, but the lyrics are unnecessarily violent and the beats and guitars are extremely generic. I just hope this won't be the future of hip-hop.

I mean, it's a Tom Sawyer album. You know what you're getting into by now. Stolen and unchanged instrumentals from songs like Beat It, Don't Start Now, and Savage Love, repeating the same title of the song over and over again, boring and dull, and a failure as a comedy album. It's nothing.
Rating: 2/10

Worst Songs: Everything else.

Just because this album is from Justin Bieber, doesn't mean it suck.

It's Justin Bieber. What do you expect?!

This album is boring and generic. The vocals sounds like strangling cat and it's horrible. They are just a poor attempt to combine Led Zeppelin, Pink Floyd, Rush and Queen. Very dull.

Not a bad album, but more often than not, that band failed to impress me. They sound like Led Zeppelin or Rush minus the charisma and Josh Kiszka's vocals become ear-grating after a few listens. I'm sorry to anyone who likes Greta Van Fleet but that's my opinion on them.

Every discography of Iggy Azalea is worse than the last. The production in this is ear grating, her flow is mediocre, and her lyrics are awful. Thankfully we won't be hearing any more music from her for a very long time.

Tbh, I didn't like the songs in this album. And that album cover (that doesn't really affect the music most of the time) is just a bunch of emojis of pregnant women.

I'm a little surprised this isn't higher considering that most people here dislike Drakey boy. But yeah, this is a terrible album. Definitely his worst. 2.5/10

Terrible crap. All offbeat, autotune, no flow whatsoever. Drake is flat out garbage and the fact he even had hits on any sort of chart baffles me.

This album hit #1 at Billboard 200. What a shame for music industry. If there is a Razzie for album, this album will get nominated.

It's surely not a very good album (despite having a lot of tracks, almost none stand out), but it's decent. Also, the return of king freak is one of the best songs rob zombie has ever done, and howling man and the ballad of the sleazy rider are good tracks.

It's a bit generic at times, but there are good songs in it. I don't think it should be at #4 personally.