Many people today enjoy a good, long video game. Not a whole lot of people like it when a game end abruptly and there's not a whole lot of content to them. However, making a game naturally long is a fine art. You don't want to just put things in at random just to extend play time because that's something gamers will eventually spot. But it seems that these games didn't get the memo. Here are some video games that added some needless padding just to extend playtime. Feel free to add to the list of what you thought was unnecessary padding in a video game.
The Top Ten
1 Don't forget the ring this time - Super Ghouls'n Ghosts 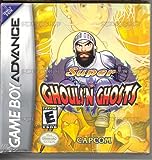 Capcom's Ghouls'n Ghosts series has always been pretty difficult from the start. Sir Arthur's armor is more fragile than glass and you have no mid-air control save for his double jump. Makes you take the whole look before you leap idiom more seriously, doesn't it? As in tradition, once you seemingly beat the game, you have to go back to the start of the game and do it again. But the third game in the series takes it up a notch. After defeating the second final boss, Princess Prin Prin contacts you telepathically and tells you that without the Goddess Bracelet, Arthur can't defeat Lord Sardius. Therefore, you not only have to replay the whole game, but make sure you acquire the Goddess Bracelet in the later levels. If you don't acquire the bracelet, then you'll be playing the 6th and 7th levels over and over again until you do. And it shoots a horizontal beam of energy with limited range, which makes the torch look good. While the Gameboy Advance remake rectified this by making the ...more

2 Temple of the Ocean King - The Legend of Zelda: Phantom Hourglass

Exploring dungeons in the Legend of Zelda series has always been what makes the series so enjoyable. But do you know what's not enjoyable? Exploring the same dungeon six times! And you also need to practice stealth, something that the series doesn't exactly excel at. Whenever you need to visit a new section of the map, you need to journey into the Temple of the Ocean King while avoiding ghostly armor called phantoms. If they find and hit you, you lose 30 seconds off your hourglass timer which is needed to protect you from the temple's life-draining miasma. And each time you enter the temple, the puzzles reset, forcing you to do them all over again. While new items allow you to clear the floors quicker, it's still no excuse to make us do this insipid stealth section each time we want to explore new territory.

While Rare can make some good looking games that are fun to play, the Nintendo 64 era was where they fell into the bad habit of adding collect-a-thons to extend gameplay. Games like Jet Force Gemini, Banjo-Kazooie and Donkey Kong 64. But I think that Diddy Kong Racing was where this habit started to develop. After clearing all four courses in a world and beating the boss, you get a piece of the Wizpig amulet, right? Not so fast. You have to redo the courses again with one major caveat. The courses now have eight silver coins each and you have to find all of them and win. You then have to race the boss a second time and of course he will be harder. While the coins in some courses like Ancient Lake are a piece of cake to find and collect, other courses such as Spaceport Alpha are a nightmare. Many people would gladly add The Tribals from Jet Force Gemini or the color coded junk from Donkey Kong 64 onto the list and I wouldn't blame them. But this entry shows that Rare can cram a ...more

While most game's padding comes near the middle or the ending, Deep Crimson's padding comes at the beginning of the game. In the months building up the hype to its North American release in 2015, we would finally get to see the girls square off against the mythical yomas in pair battles and unravel the mysteries of the girl Kagura and her bodyguard Naraku. But the first chapter of the game retells the ending of Skirting Shadows where Asuka and the other shinobis from Hanzo infiltrate Hebijo to get back the school's scroll, prepared for a fight with Homura and the other elites. Furthermore, there's a very steep difficulty curve early in the game. Didn't Kenichiro Takaki and his staff realize that maybe the majority of those who bought the game will have already completed the previous game? Or maybe they weren't able to come up with enough chapters to avoid the chapter count landing on four, which is considered an unlucky number in Japan, so they decided to add the ending of the last ...more

While Bravely Default might be an awesome love letter to Final Fantasy fans, it did have it's fair share of troubles. The biggest problem with the game was how the last four chapters made players repeat journey around the world of Luxendarc to reawaken the four crystals not just once, twice or thrice but FOUR TIMES! That's right. While each of the worlds visited is different in some ways and some quests optional, that's really no excuse to make players repeat the quest four times. Seriously, I was getting so tired of the innkeeper in Caldisla greeting me good morning, I was ready to pop the card out and smash it with a hammer.

While I haven't played this game in a while, I still remember playing through the insipid slog that is The Library. Throughout most of the game, you get to guide Master Chief around some awesome looking levels while duking it out with The Covenant. And these guys had some serious A.I. to them that made them act according to the situation at hand. And then, we get to The Library. You have to trek through multiple floors that all look exactly the same and battle enemies that continue to attack regardless of how much firepower you're packing and you'll be using the same tactics over and over again. As Dan Paradis from Watchmojo puts it ever so poignantly, it's a level long enough to make your Doritos go stale and your Mountain Dew to go flat.

I still have a great fond for the classic Halo games, and this level from the game that started it all I remember not liking seeing its just a gauntlet going up to retrieve a key by force. Pitch darkness, followed by the flood coming at you constantly makes this level on one of the most annoying in the series.

I played CEA on Heroic and it wasn't that bad. But then I played on Legendary. It was a disaster.

Many people consider the inverted castle from Castlevania: Symphony of the Night to be sheer brilliance in extending the gameplay. The two castles in Harmony of Dissonance? Not so much. As Juste and Maxim traverse the castle to rescue Lydie from Dracula's grasp, Juste encounters an evil version of his best friend Maxim in another castle. In order to get the best ending, players must traverse both castles to find Dracula's remains, kind of like how they did in Simon's Quest and Symphony of the Night. As you probably guessed, these are located in one castle or the other which means traversing those castles multiple times. Exploring two castles can be exciting at first but when you have to collect a bunch of doohickeys to get the best ending, it definitely becomes a slog. It just goes to show you that double the map size doesn't always equal double the fun.

I will admit that riding around the streets of Gotham City in the Batmobile was an absolute blast and I think it was something that was needed. What wasn't needed were all the battles involving the Batmobile. While they do start out pretty fun, having to duke it out with the same types of enemies over and over again makes it a chore and a bore. And it's a real shame because I found the other Batmobile sections quite enjoyable. Rocksteady, if you decide to develop another Batman Arkham game, do us all a favor; either restrict the Batmobile to just transportation and puzzles or leave it in the Bat Cave.

The Phantom Pain is considered by many to be the best Metal Gear Solid game out there and when you start exploring the open world, it's easy to see why. There are numerous missions and challenges that can cause you to lose dozens of hours before you know it. But I can't shake the feeling that it could've been so much more if Konami had not given Hideo Kojima the boot, thus forcing his team to cut corners. The second chapter repeats many of the missions from the first chapter. Some missions like C2W disallow you from bringing your own gear (yes, even the chicken hat's disabled) and forcing you to only use what you find on site, while others such as Footprints of Phantoms will give you an automatic game over if you're spotted. It's a needless exercise in padding that could've been avoided if the CEOs of Konami hadn't lost their patience.

10 A nightmare blast from the past - Megaman 3

While Mega Man might be the main playable character, we all know who the real stars of the games are; the robot masters. Many of them offer a unique challenge that reward the Blue Bomber with a cool weapon...most of the time. Normally, after you defeat the initial eight robot masters (six in the first game), it's off to Dr. Wily's fortress where he's saved the nastiest obstacles for last. But not in Mega Man 3. After defeating the original robot masters, Mega Man has to revisit four stages and defeat the Doc Robots, two in each level who have the same combat abilities as the ones from Mega Man 2. These robots are way harder not only because their bulky build makes evading difficult, but some of the special weapons that deal the most damage are difficult to use effectively. Even more, you can't obtain their weapons again, which would've been awesome. This extra bit wouldn't be too bad if there was some kind of reward for doing it, which there isn't.

The Contenders
11 The SCS Goliath Maze - Space Quest V: The Next Mutation

I'm calling it. This item was not here because no one here has heard of the legendary Space Quest series (sadly). It's an incredibly great series and the fifth entry is among the best in it due to how different and interesting it is but seriously this damn maze near the end of the game is one of few cases of padding in the series and it was..., ugh. It was so climatic and then these complicated as heck tunnels in the vent of the enemies' ship ruined it. Well it gets back on track once the maze is over but this is pretty much impossible to complete and it caused so many people to stop playing the game. My dad was one of the few who completed it on his own but it still was annoying. Not to mention how LONG it is as well.