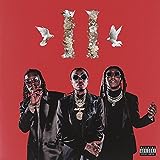 I agree this album is terrible...and to think about it the first culture was nice - coryrevv

I hate this album! The lyrics are inappropriate and she has an annoying voice!

But it won't be for much longer. - DaWyteNight

Why did he blow up in the first place...

This guy makes Gucci gang sound like a tupac song...

NO THIS ALBUM FIRE

This album would've been disappointing...if it had had anything to live up to. - DaWyteNight

This album should be number one...most dissapointing album of 2018 - coryrevv

The Pimp Tape - Too $hort

The World is Yours - Rich the Kid