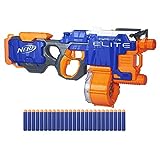 Are you serious? This thing is amazing! It's also shoots five darts per second! It's you that is bad. The worst gun is the Deploy. 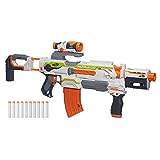 It is ok but not the best

ITS JUST AS TACTICAL AS A JOLT 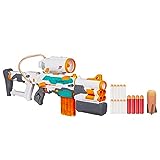 This website stinks these nerf guns are very good

I think the nerf jolt is good becuse you can carry it more easy and u can fit it in your pocket.also people think it is bad and I do not like that

Bruh my friend has this and it broke after 3 days of normal use. Plus this thing you call a blaster jams way to mutch

Most overrated blaster ever

Rebelle is the worst of all

This Nerf Gun is very Overpowered, You guys are probably saying that because you don't have one, Its amazing, recommend for close ranges to actually make sure you hit your opponent and not far because you'll get attention from them and most likely to blast you in the head with a good gun.

Its good but its accuracy!

Yeah I agree with him!

Deploy is trash. coop did the right thing by killing his with a hacksaw

THIS IS A BAD NERF GUN

Love this gun only when you use nerf brand darts

This shoots like as far as I can fly


(this bow is the WORST)

Never heard of it and sounds terrible

This one of the best nerf guns, and it won't break your bank! this is top tier material!

This is the best starter gun what u mean

Why even remake it

Hasbro thought is was a good idea to make another breech loader
#sarcastic_thumbs_up #breechloaders_suck also what is the modulus ecs on this list?!
the modulus is an awesome blaster that jams next to nevr
also by the way, when you say "screw you losers" in all caps you sound like a 9 year old was just grounded by their parents from (suprisingly of all things)
an EA sports game, which you as a 9year old wouldn't understand, but everyone around you would

I LOVE THE IONFIRE TOO HOW IS THIS ON THE LIST? BREECH LOADERS ARE GREAT, SCREW YOU LOSERS, I'M LEAVING THIS LIST!

I have this one it's a good sniper but heavy and not very accurate.

Great as sniper rifle is you don't like big attachments but over all horrible power...i may have over exaggerated on the power part but still sucks on power.

Too hard to reload. Fires way too fast, and rival blasters are the worst. They should have given it a mag like the khaos. Don't waste your money on this trash, get the apollo. its be best rival blaster

It's easy to reload

Bruh! Its fast to reload! And has rival precision so it's very accurate! Shots really hard so your dart or ball will hit them first! And it has high capacity! Almost everyone uses the nemesis and most or almost everyone (including YouTube nerfers) say it is one of the best guns ever. Even a youtuber said "1v1 me on rust mate I'll bring my nemesis you bring one of these I'll shreik you dog! " Yeah I don't see why it's bad it is a phenomenal nerf gun.

The breech loaders are really hard to load. But good blaster

I have that that one

TERRIBLE ITS TERRIBLE HOW YOU USE IT

Yes it is very good gun. It is the upgraded version of strongarm

I have it. bullets fly far, pretty accurate!

Good shooting, but you need four AA batteries to power it so buy an 20 aa batteries pack to make it shoot well

Nothing new most disliked gun

Don't get a deploy, Rapidstrike is clearly a favorite among nerf youtubers

The rapid strike rules you dummy’s it shoots farther than a rampage which shoots 90” Feet 27 meters.

This gun is great really good

This is trash it is expesive trash air systems with bars(clips)?

This thing should be called the Hornet ASS-6 with how unreliable and dreadful it is. Nine times out of ten, two or three darts don't even leave the barrels even when I give it twenty to thirty pumps. The darts that do fire tend to go only a foot or two before dropping so only one or two darts even can even be potentially helpful. Either this blaster has a completely bonkers method of priming and pumping, had some defective models, or is just all around terrible. What a massive waste of perfectly good plastic and foam.

Why is it on top ten best?

DO. NOT. BUY. THIS. BLASTER. The bulletsa re to hard too put into the cip and when I do the gun james so icant get amy kils

This blaser I spre7tgy okd so pits bas

This thing sucks it only stores one dart only

To cramped in the grip area, jams to much, wacky magazine system, which takes 2 mags, and a stock storage, which gives more cramps. A lame excuse of a blaster

It can barely shot three feet.:(

I think the best nerf gun is the retaliator
And u guys comment who like the reataliator.

This gun is awesome

Weirdest cocking and shooting system ever

The trigger is hard to pull and design is bad

I like this gun. I have three, and all of them function properly. This list is dumb. It should go:
1- Deploy
2- Spector
3- Barrel Break
4- Double Dealer
5- Bulldog(Deploy 2.0)
And 6- any other Doomlands guns

This jams a lot, but! It comes with an awesome stock which people still use

This gun is trash. It is hard to load the bullets into the clip and when I try to put the clip into the red ball gun it James.

Take for ever to prime

Wrench/pull back is flimsy, arrows bend and then jam and the gun is just too wide.

I think its cool and powerful but it likes to not work well with old and more squishy darts.

Worst thing ever!
Comfortable though