2020 has entirely been quite a year. Most notably for music, and politics as a whole. These are without a doubt... the worst "rock" albums this year have to offer. Often being vapid and pointless, or just plain unnecessary.
The Top Ten
1 Father of All... - Green Day 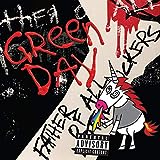 I'm a big fan of Green Day. This is not a very good album though. They didn't put a lot of effort into this one. You can tell because it's less than 30 minutes and it's pretty generic. Not sure how I feel about the autotune. I kind of like the title track though. At least it's a short album. This is their weakest album definitely. But hey there's always another album. It will probably be better. The trilogy wasn't good either but Revolution Radio was released after that and it's a great album to me. 4/10

This album is a massive epic fail that fell flat on its damn face. Some of the worst songwriting, vocals, and overall sounds Green Day had to offer. The same band that made American Idiot, and Dookie, made something this atrocious. It's a shame too... cause the covers that were released after this album came out sound more like Green Day than this album. It's a album... so devoid of creativity and energy that it's insufferable.

Very disappointing album. It sounds generic and is a far cry from their previous albums.

Why is Testaments new album on here ? Titans is sick!

If you've heard a Five Finger Death Punch album, you already know what you're getting yourself into. This album has their trademark cliches multiplied by a thousand or more. Ivan Moody tries really hard to convince you that he could beat you up after school, which comes off as laughable. It's no surprise why this album is on this list. The energy drink chuggin' douchebags themselves have proven time and time again that they refuse to adapt and change. More power for them I suppose.

I don't think it deserves to be this high up to be honest. It's definitely not one of the best albums of the year, but it's not that bad either, there are a few songs on there that sounded good (at least to me). The rest sound the same though.

The biggest problem with 5FDP is that Ivan Moody is a half-trick pony. His lyrics of begging for attention of how much of a man he is followed by "I'm all alone..." type material is sad. The musicians behind him have lost any passion and it shows on F8.

They literally tried acoustic rap. It's such cringe.

This "band" was formed by a former drummer of FFDP. If that isn't a sign... to how bad this album is. Then oh boy... you're in a hell of a treat. Not only does this album has misogyny that would rival Theory of a Deadman and Hinder, but it also has terrible bocals unsurprisingly. I'm convinced that no effort was put into this album at all.

"Psychosexual" sounds like if Slipknot and Blood on the Dance Floor had a baby.

Don’t Want To Hear It

Overall, this album is a cheesefest from start to finish and sounds like a Jon Bon Jovi solo album (case and point, it's just him on the cover). It also tries so hard to be political or humanitarian, but Jon Bon Jovi is definitely no Bruce Springsteen and he still doesn't seem to get it. Also, Jon's vocals sound like he's 80 years old, you can feel that they have been damaged by the many, many years of touring considering that most of Bon Jovi's songs hit high notes. It's also a sign that BJ should consider retiring because they may not have a lot of staying power left.

Bon Jovi does what they do best. Cheesy vocals, with uninteresting riffs, and rather stagnant lyrics. If you do like this band, more power to you. I personally can't behind the vocals, production, and overall sound that plagues it. It's a cheese-fest that's just kinda boring to sit through. Like most Bon Jovi albums I might add.

Pearl Jam has always been a grunge band I was never too particularly fond of. Listening to this though cements my distaste for them more. Eddie Vedder's voice sounds very strained and unimpressive here to say of the least. An album that's tedious, dull, and downright groan-worthy.

Believe it or not, this is Pearl Jam's third best album, behind Ten and Lightning Bolt. This isn't saying much though, because their entire discography is filled with snooze-fests with only one highlight on each album. Gigaton has at least two semi-decent tracks.

6 Say Nothing - Theory of a Deadman

The only reason why this is lower compared to other albums. Is that calling it rock is somewhat debatable. Terribly written "pop-rock" without any soul or emotion at all. Tyler Connolly tries to speak about political issues but offers very uninspired answers to said problems. Which makes this album boring to sit through.

In what universe is Gigaton, F8 and even Father of All... worse than this? Did the person who made this list just clicked on google "rock albums from 2020" and put the very first results they appeared on? This is way worse than all of those albums.

This is offensively bad. Tyler Connoly singing songs about Ted Bundy and the Charleston shooting set to adult contemporary is pathetic.

I don't particularly care for Breaking Benjamin all that much, but this is probably the least terrible album out of all the other choices here. It's mostly just ballad acoustic renditions of their previous material with a few guest collaborators. It's still bland and uninteresting to hear though.

This one sure is a snooze fest

9 A Celebration of Endings - Biffy Clyro

The Contenders
11 Solitude in Madness - Vader

What? I really liked this one.

16 Throes of Joy in the Jaws of Defeatism - Napalm Death