Hey You, I Love Your Soul 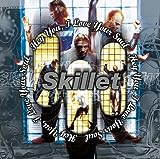 Are you people crazy?! this is actually a good album with amazing songs. I understand that many of you don't want to vote for your favorites but don't take it out on the most underrated album. listen to locked in a cage suspended in you scarecrow and the saddest coming down. - jachan

Not there best album, oh and it's Awake, not Awake and Alive.

This album is bad but a few songs are good like scarecrow, locked in a cage

The original and most raw album a very worth it album

I actually think that this and hey you I love your soul are both really great albums,they have that Christian beautiful lyrics where we praise jesus but they have an grunge style for a few songs and some industrial...love those albums
In fact,I think every album is great but honestly rise and unleashed are kind of bad. - Idiot244

This, Comatose, and Rise are all great albums. This list is bull crap. - Alpha101

There are no skillet's worst album, they are all awesome especially AWAKE. This list sucks.

The last good album in my opinion

This is the most raw, emotionally charged record that touches on more tough real-world issues than Comatose. It may be considerably simplistic, but that lets the highly relateable lyrics shine through. I'd say this is the most genuine album, but that may just be because it's the best.

That was the best actually - Idiot244

Skillets heaviest album and one of the best

Get Comatose to the bottom of this list. That's their best album.

This album is actually pretty good! It's repetitive I can tell you that! The album is one of my favourites!

Terrible album... Total sellout by a once great band.

This is honestly disappointing

There are no catchy songs like in any of their previous albums. I was totally disappointed, after a 5 years wait I get this .