Whether it's a movie, or made-for-television, they're the televised Christmas specials that you and your family watch every year on television, and these are the ten best ones out there (with the year that it was first broadcasted included).
The Top Ten
1 Rudolph The Red-Nosed Reindeer (1964)

My favorite Christmas movie/short of all time. It's creative and oozing with the warmth and cuddly feeling. I just love it! I'm happy and exited for Christmas to celebrate its 50th anniversary!

Beautiful. In my opinion, it's better than the animated versions. Nothing can ruin this classic good movie.

Classic cartoon... A must watch every Christmas

This is my favorite Christmas special of all time! Well, it might be 2nd because I'm watching It's a Wonderful Life tonight! (For the first time X3)

Rudolph the Red Nosed Reindeer and Frosty the Snowman are overrated. This one is the best.

I have to see how the grinch stole christmas, to make it really fell like it's coming.

Better than the two theatrical grinch movies in my opinion!

I used to watch a charlie brown christmas, but it has lost it's magic over the year's.

Come on, it teaches what Christmas is really about! Jeez, people now-a-days...

Christmas isn't quite christmas without this iconic masterpiece!

I watch this every year with my parents on Christmas. Best times of my childhood. I miss it

This movie is the best idea ever! When I was little I'd always want to know answers to mysterious things about Santa. And yeah, the Grinch is kind of old since there has already been an updated full length live action feature film so my vote goes to this movie.

What? This special is mediocre! The animation is dull, the evil magician is annoying, Frosty is a total airhead, Karen is a complete brat, and Santa sounds like he's dying! Who would even think this T.V. Christmas special is remotely good? Stick to the music, Frosty!

Buy 3 cars from Georgia for £3,500 or less and recreate the journey of the Three Wise Men with the added danger of The War on Terror in Iraq and a war for independence in Southern Turkey.

A British institution. Whoever didn't vote for this clearly doesn't get what the British consider Christmas specials.

Del and Rodney becoming millionaires in Only Fools, Morcombe and Wise and their South Pacific pisstake with several newsreaders, Alice Tinker going into labour for real in Vicar of Dibley's Nativity sequence and of course Jeremy James and Richard's encounter of Stig Jesus on Top Gear.

This is the one where the boys travel to Bethlehem from Iraq. They encounter border control, political bans and Top Gear interest in Syria.

When I think Christmas Special I think of Top Gear, Doctor Who or Downton Abbey.

This is overrated. Snow and Heat miser may be good, but I really don't like Mrs. Claus in this special. Seriously, lets face it. You can't be Santa Mrs. Claus. That's just creepy.

This Christmas special is okay. I like Snow-Miser, and the animation is great, but other than that, this T.V. special didn't stand out to me.

This movie is good, but just mostly due to the snow miser and the heat miser.

If your looking for a must see movie, watch this one. It's an amazing classic that puts us all in the Christmas with classic songs that never get old. It also teaches many lessons. It will forever be known and loved

The Contenders
11 Simpsons Roasting on an Open Fire

This is definitely my personal favorite. It's a Christmas tradition!

I love this one. 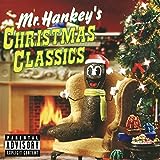 The one where Jerey Clarkson got into a bit of hot water with Argentina regarding an imfamous licence plate.