I'm proud to see this as the #1 franchise on the list. The movies vary in terms of production values and plot originality but they make up for it with playful tension, clever kills, and a barrel of fun (with 'Part VI' being the best of the bunch).

Jason rules! Parts 1 through 7 and Freddy vs. Jason are all either very good or great. No other series is that much depth.

Glad this is number one. Even the ones where it ISN'T Jason are enjoyable. my favorites are actually 3, 5, and 6. (yes I know 5 isn't jason, but still good in my opinion) Overall though much more solid than the Halloween series in which only 2 and 7 are good in my opinion

I love this list, its like I made it! But I would put it on 6, but its still a great list. And Jason is the best horror movie.

2 A Nightmare on Elm Street

I saw the first nightmare on elm street because it had johnny depp in it and at the time I had a crush on him, so I saw it, it was really good, the movie's after that where ok but not as good as the first one.

THERE IS NO COMPARISON. The Nightmare on Elm Street series plants a new seed in horror. The utter thought of someone being able to crawl their way into your nightmares, control your mental state, and kill you from the inside, is probably the most terrifying premise in horror. Not only is every entry enjoyable on some level, but the series introduces the most iconic horror villain of all time. Freddy Krueger has personality unlike the unoriginal generic slasher. If you are a horror fan, this is the go-to franchise.

Friday the 13th just got stupid, and Halloween 3 ruined the franchise. But, there is no non enjoyable Nightmare film. Also, there is no Horror character as iconic as Freddy Krueger.

I just wish we could see more 'New Nightmare'-inspired films these days. The fictional entering reality. What a terrific concept.

what? how is halloween not number one?, I think the halloween movies are the best, but not season of the witch's, that one sucked, it didn't have any of the right people in it, where was michael? if he is not in the movie then it's not halloween, it's just a movie about something that happend on halloween.

How this isn't #1 is beyond me! Sure they've had some crap movies, but what franchise hasn't? They're are the perfect horror movies, and only about 4 of them are bad. The other 6 are some of the greatest horror movies of all-time.

Halloween is awesome due to surprises, psychology, and the music. The drama isn't bad either, the way they show Michael Myer's relatives' trauma.

Hands down the best horror movie followed by Friday the 13th.

This IS number one. All 5 of these movies are quality and that is more than you can say about Friday The 13th, Halloween, or Nightmare On Elm Street's respective series.

The First Two were amazing, the third was awful and the fourth was watchable.
This is one of the few horror movies that has something for everyone. All the killing and suspense for the horror fans, not too much blood or gore for the squeamish, and a lot of humor for everyone! Not to mention a great cast.

Scream is DEFINITELY the best for me. I watched this movie about a month before I chose my GCSE's (my subjects to take for the next 3 years) and this film was one of the main reasons I chose drama, for some reason it made me REALLY wanna star in a horror movie! Besides that, although this franchise is pretty cheesy, I still love it! I haven't seen the 4th one yet but even though the 3rd film isn't as good as the first 2, ITS STILL GREAT!

I love all the screams. None were really a let down with me and that's why I'm voting for this franchise. CONSISTENCY

How is this not number one? It's one of the few franchises that stayed good all throughout and didn't get stupid like Friday, Nightmare, and Halloween.

AN unbelievable, entertaining, violent, amazing and successful franchise which would be the best of all time. I liked all the saws and I was not disappointed one bit.

To me, Saw is by far the best horror movie franchise I have ever seen in my life. The unpredictable plot of the series always kept me awake when I wanted to sleep.

Twists and turns keep you on the edge of your seat for 7 movies. Great acting, great plot, amazing movies. Saw will always be in my top 10 favorite movies

Alien franchise is true classic. I love all 4 parts and still hope they make another one

The original 'Alien' and 'Aliens' are classics. '3' and 'Resurrection' are crap while 'Prometheus' and 'Covenant' are under-appreciated. The series has had its ups and downs but I'll always be a fan.

The only series that hasn't had an awful movie in the series, sure there was some asinine movies like pregnancy thing and Chucky's son, but they still kept it entertaining. TThis Franchise succeeds because it saw how stupid the concept of a killer doll was and rolled with it not trying to be serious and making fun of itself

To me. Nothing is better than Child's play... a psycho doll who is possessed by a killer. All of then we're good except for bride of chucky.

I have only seen 3 of them. And they were awesome.

Awesome terrifying movie 10 out of 10!

It's a shame that a fifth film was never produced. I heard it was meant to combine Ash's trilogy with the 2013 film. I'm sure it would have been great. At least we have the 'Ash vs. Evil Dead' to enjoy in its place.

Definitely the greatest horror franchise of all time. The original 3 movies are great, the remake is great and the T.V. show is great!

A very well done trilogy, the best rated series on this list, even the remake was good though no where near as iconic as the original trilogy

Love the first one, love the sequels, love the spinoff shows, love bruce campbell, and, in short, evil dead truly can do no wrong

I love the concept of how their is a psychic that can see when everyone will die although you will never know how they die until you see them get their head blown off or strangled to death.

The only series that has made successful series that is purely about killing people in creative ways.

Not bad, but the picture missed final destination 5.

This is the scariest movie ever!

Romero is pure genius with a finger on the pulse of America with his original Dead trilogy.

This should be higher. I like most of the films especially when people kill zombies.

Seriously, A demon ghost coming in and scaring your family and eventually killing you and/or your family.

How can this be on the end of the list? They have some of the greatest movies of all times. They are the first Horror Franchise, established the genre and with the original Frankenstein have the purest horror scene of all times. They really belong to the top, but even if you disagree, they defenetly should be in the top 5.

Classics such as Frankenstein, Dracula and The Invisible. Also, includes some other greats such as The Mummy, The Wolf Man and Creature From The Black Lagoon.

Shouldn't be at the very botton, but I have a feeling it was one of the last things added to the list after people lost interest in the list 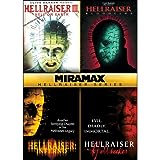 The first 3 parts were awesome, some others were lame, but overall it has more good movies than bad ones. It should be in the Top ten in my opinion, I'd even rate it Top 3

21 Children of the Corn

Some of the films (like Children Of The Corn 2) get bad reviews but I think they are all awesome! None at as good as the original though!

Really underrated! I liked most of them!

This franchise has scary movies!

Ju-on is one of the best series out there, should be in the top 5, perhaps even top 3

The fact that this series isn't even on this list while prom night is makes me lose all faith in humanity.

The first two were absolutely amazing, people forget that B&W movies can be franchises too