Naughty Dog has been called the best video game creator people ever. They've been making PlayStation exclusives since Crash Bandicoot on the PS1. Now they've made Jak and Daxter and Uncharted.
The Top Ten
1 The Last of Us

I went into the Last of Us expecting a game like Tomb Raider, which I thought was very action heavy. I came out of the Last of Us maybe 16 hours later, and something inside me had changed deeply. The Last of Us is, by a long shot, the best game I have ever played and I am still restless for the sequel. The design, the graphics, the gameplay, the story, the voice acting. It was all perfect. Flawless, even. In a nutshell, the Last of Us is the most unique, emotional, relatable, tear-jerking, and amazing gaming experience I have ever had and nothing will ever be able to top it, except for the eventual part II. Thank you, Naughty Dog.

Really took storytelling in games to another level. Did it add something to the table? Not necessarily, but it did it VERY well. Incredible voice acting. Deep character developement. Fun, intense gameplay.

Just an awesome game. I've played some pretty story-driven games, but I have never cared for characters like I did this. A tear or two was shed playing this game and I had no shame. Naughty Dog, we love you.

This is quality video game making. I've never played the PS3 version so my vote goes here. Up until this game, my vote would have gone to Uncharted 2: Among Thieves (like Tomb Raider meets Indiana Jones but turned up to 11) but this one hit me right in the feels! Let's hope Part II doesn't mess it up!

Wish the comments on here could be vetted more (do we really want to read a comment on an 18 rated game from a 12 year old? )

I admit, I hate this genre. I find it dull and slow paced because I'm a stylish action type of gamer.

But this game... It was so good that I couldn't stop playing it. The mechanics were good, it was so polished, and I wanted to keep playing for the story as well.

A game that I enjoyed from a genre I can't stand. That's how good this game is to me.

In my opinion, not technically "better" than The Last of Us or Uncharted 3, but the first game that really made me think "this is next gen" I was not impressed by any PlayStation 3 or Xbox 360 game before this and this game for me marks the breakthrough of this generation of gaming.

My favorite game in the world! I've replayed it like 10 times. The graphics are really good for a game made in 2007. (So far) My favorite game by naughty dog. I hope you guys agree with me.

Even though I live and breathe Crash Bandicoot this is one of the best (if not THE) video games. The story, the settings, the graphics! Especially the remastered version is to die for. Amazing! A+

The Last of Us is probably better in very category, but Uncharted 2 is way more fun, which is what really matters.

Although Jak and Daxter, Uncharted, and The Last of Us are fantastic games, Crash Bandicoot started it all, and this is easily his best appearance. Although the story is fairly generic, it succeeds in EVERYTHING ELSE. The gameplay is addicting, the bosses are amazing, the characters are insanely memorable, the replayability is endless (still need all the platinum relics) and the build-up throughout the entire game of Uka-Uka and his power, and every other boss didn't disappoint.

THe BEST crash game ever! I can't wait for naughty dog or another gaming company to make another crash game

Best of the best!

This game was just so amazing, graphics, storyline, gameplay so very realistic hardly any limitations as to the choices to be made and routes to take within the game...I literally fought my son so I can play and complete this game...

Jak 3 is my favorite of all the Jak and Daxter games, and my favorite Naughty Dog game, period. The gameplay was so fluid, with unique challenges and a really compelling and exciting plotline. Sure the graphics may be outdated NOW, but back in the day, they were cutting edge and even now I would take the Jak 3 graphics over some of the stuff from today. Quality in graphic and animation doesn't make a quality game. If people ask me what makes a good game, I always say plot, playablity, action, abilities, and characters; and does Jak 3 have all that? Why yes, yes it does! And that's why I love playing this game because it is literally the complete package.

Jak 3... what can I say? It was really great, with amazing "Secrets", the Jet-Board with a new upgrade, Light Jak, 8 new guns, Buggies... It just improved on TPL and Renegade!

I loved the story, it had an emotional touch with Damas, and the concept of dark makers and Spargus city were amazing! The "Secrets" also made the after game good and added replayablity with mission select. It was not too easy, like TPL, but not too hard, like Renegade, it had a solid difficulty, which made it not boring or frustrating.

I've always loved this game and honestly always will! Good Graphics shouldn't be what determines the quality of the game itself, the story is brilliant and I can't believe it isn't number one.
Even when the quality of my hand me down disc was absolutely terrible and crashed all the time it wouldn't stop me from playing it.

I just don't get it... If uncharted is 10/10 then this is 20/10. People who say uncharted is better they are fools that haven't played this game. Uncharted does have better graphics, but does that make it a better game? Uncharted is all jump here jump there climb this climb that. This is a REAL game.

6 Jak and Daxter: The Precursor Legacy

This game was ahead of it's time with the technology that they incorporated into it, with a vibrant world that felt unique and characters that were inventive and original. Jak and Daxter may not be the best game in the series, but it is still an outstanding gaming experience and a fun ride. It's always worth playing!

Jak 1 is best j&d game its colorful, fan and has good controlls.
I have crash warped 68% completed and I'm hyping remastered trilogy and I think crash 3 is best crash game.
Uncharted 1 is much better than 2. Haven't played 3 and 4.
Last of us... I don't like zombie games, movies, seriesses and so.
Racing is fun but doesn't beat platforming.
Open world > linear
And I like jak more than uncharted.

This is the first game I got for my PlayStation 2 when I was about 7. I even have it now in the Jak and Daxter Collection and still LOVE it! It is not only a classic naughty dog game, but a really fun platformer and action/adventure title. It might not be their BEST work, but it is one of my favorite games of all time!

Just got the Jak and Daxter collection for PS3 a few days ago, and I absolutely LOVE this game! I'm only 32% through the game, but I already rated it a 10/10. Not as good as Crash Warped or The Last of Us, but it is right behind them. I prefer it over the Uncharted series.

This was one of those video game sequels that did three things successfully that few others sequels do: 1. Continue the story from the first game and do it well. 2. Deviate from the original game enough to give the sequel some original flair and format. 3. Improve upon the original without removing anything that made you love the first game in the first place. Jak 2 has it all and it doesn't stoop to a lot of cheap tricks but rather uses originality to make the game memorable and outstanding.

Naughty dog are crap when it comes to having games with good stories with the exeption of Jak 2, Jak 2 has an amazing story with amazing gameplay and amazing characters, Uncharted and the last of us fail miserably when it comes to good story and memorable characters. The only PS2 games that are better are Ratchet and clank 1, 2 & 3 and MGS3 Snake eater

Definitely the best. Hell uncharted and last of us are movies not games... 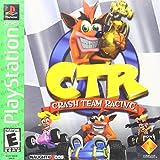 Best racing game there is. Its is an outstanding game.

I've played a little of this game, and I did not enjoy it. But the reason is that I do not like puzzels very much, and that's basically what this game is. Puzzles. Also, I did not like the gameplay of this game. It was just confusing to me. But I played, and enjoyed, The Last of Us, and the controls are basically the same, so I may go back to it and play it now that I understand the controls. I still can't stand the puzzles, but I heard it has an amazing story, and the graphics are phenomenal.

Its an amazing game. I love everything in it. I love the game's graphics and the puzzles inside and all the secret and treasury stuff that you find on the way. AWESOME GAME!

Uncharted 3 is the best out of the Uncharted series. (In my Opinion)

Crash 2 is arguably the greatest game on the PlayStation and best of the crash series. It brought everything we loved about crash 1, fixed all the problems, and polished the already golden masterpiece. Crash 3 is an outstanding game, but it cannot stand up to the perfection crash 2 set first. 3 felt too much like 2 but with crash superpowers.

Not to hard not to easy. Perfect game for playing 100 % on! 1 to hard and 3 to booring playing time runs.

Has great challenges ahead of you and would keep you at the edge of your seat! Drake's fortune may have not been as good as the other two, but this game is a GREAT start.

I may not have the popular opinion when it comes to this game, but I think it rocks! I love racing games so much and for me Jak X will always be near the top of the list, even being better than some Mario Kart games for me. This game is just superb in every way!

Really?! Number 19? More like number 9! This game was awesome! Hell of a lot better than Uncharted: Drake's Fortune.

Crash Bash and Tag Team Racing were NOT made bu Naughty Dog! They were made bu Eurocom and Activision!

I want this game! I haven't played it yet but I know that it will be the bomb as the rest are the big bomb!

Has to be the best game I have ever played make more just like it don't change a thing you kept it uncomplicated to use but very moving also having to think to solve the puzzles and very good story looking forward to uncharted 4.

The best disc you could have all three Uncharted games sharing the adventures of Nathan Drake.

20 The Last of Us: Left Behind

This game must be remake