This is a list of the best stand-alone Flight Simulators currently available for PC. This includes Civilian and Military Sims.
The Top Ten
1 Microsoft Flight Simulator X

It was a sad day when Microsoft decided to make no more of these. I really believe only they have the power and integrity to make these simulators to match as real as possible the profile of planes. I know a few pilots of small and commercial planes and they all say that they are very realistic. The key thing, as you'd expect, is that you don't get the feel. However, the instruments and responses are pretty bang on. There hasn't been better than this series... but... I think Microsoft gave up because they couldn't iron out the bugs. It crashes or goes off on one way too often. That said, it is still utterly brilliant

I am too old and broke to fly real aeroplanes these days but I thank the heavens for still being able to fly in my now out-dated FSX v10, Microsoft's last effort. Have been using M.S. Flight Simulator for about 24 years now and, especially throughout my real flying days, I have found it to be a very realistic way to hone both my flying and procedures skills. M.S. Flight Simulator continues in its new incarnations as FSX: Steam Edition and Prepar 3D so it's good to know that this legendary flight simulation lives on.

FSX currently sets the standard that all other Flight Simulators are compared to. Some of the features that have made it so popular include a simple to use interface and controls, excellent tutorials and missions, beautiful cockpits, and decent scenery. Many 3rd party addons are available, in fact, 3rd party developers have made more money off of FSX than Microsoft!

Almost a decade and a half and still kickin strong! it's a shame that the studio had to close, who knows what else they could have done after releasing Flight. No one has yet to leave a more memorable simulator than X. They also weren't too shabby with their train simulators either! Live on FSX, live on!

X-Plane sports some of the most advanced Aircraft Physics ever seen in a PC Flight Simulator, but suffers from unimpressive scenery, and poor ATC control. The best experience that you will receive in X-Plane will probably be in using 3rd party Scenery and Aircraft

X-Plane 10 are way better than any of these other simulators... 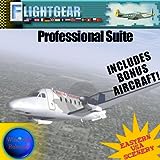 FlightGear may very well be the ultimate Open-Source success story. Hundreds of aircraft, beautiful airport scenery, and the fact that developers are constantly expanding the scenery, adding and improving aircraft, means that it earns itself a spot in the Top 5. You can perform a formation flight with your friends, fly an X-15 in a sub-orbital flight, fly WWII era Warbirds, fly an F-14 off of an aircraft carrier, join a fleet of virtual Airliners, fly a variety of Seaplanes, or just fly a small prop plane and admire the scenery. And how can you argue with FREE? 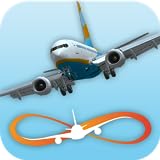 What Infinite flight has achieved on Android has never been paralelled on other platforms so easily. The joy of controlling aircraft with motion and touch along with the wide array of aircraft, liveries and scenes :Unmatchable.

With Mods, you have access to over 100+ Aircraft from many countries and countless user-created missions. What amazes me about Il-2 Sturmovik is that although the original game was released in 2001, the developers have released several expansion packs (the most recent being 1946, which includes all previous packs) and are STILL releasing patches over a decade later! The developers are still dedicated to caring about the fans of the sim. And it can be found at a great price, making it one of the best values that you can find on a flight sim.

Best ww2 flight sim of all time. No other game come close when it come to content.

Jane's USAF is a legendary Flight Sim. Ahead of it's time when it was released, it did not feature a large number of flyable aircraft or usable weapons, but what it did carry was absolutely stunning quality. USAF included lively and fun tutorials, realistic and complex weaponry, and tons of campaign missions including missions from Desert Storm, Vietnam, as well as a fictional war with the USSR, and a mission editor. However, the program is quite out-dated, and even has major problems running on Windows XP without modifications.

My Childhood game, that made me a gamer and military airplane enthusiast.

I played this when I was little. Best memories from a game, EVER.

It works, it's fun, with tons of of add-ons. It's what made FSX what it is today. Too bad though it's gone the way of the dinosaur

It still works after all these years! It loads quickly.

Still flying after all these years.

The best sim ever

Regarding realism in flight dynamics and modelling of aircraft systems DCS is currently not beatable, at least by military flight sims 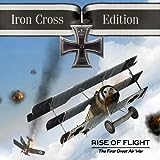 RoF is the definitive WWI Flight Sim which gives you beautiful graphics, interactive campaigns, and stunning cockpits and aircraft models. And the realism is bar none fantastic. There is nothing like having to clear a gun jam while dodging enemy aircraft and AA fire, as well as trying to keep from hitting the trees. However, the game can get pricey with DLC aircraft, as the game comes with few aircraft. 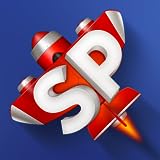 It's for good people

Orbiter 2010 is a very fun and realistic and FREE Space Flight Simulator. Great for learning about orbital mechanics. Thanks to 3rd party users, you can relive the Mercury, Gemini, Apollo, Vostok, Soyuz, Space Shuttle missions and more, as well as fly fictional spacecraft that can take you across the Solar System. Many other mods have been made that allow you to manage cargo and virtual crew member and passengers. However, Orbiter 2010 carries a steep learning curve. Flying to the ISS and docking, or even flying to the Moon are complex endeavors. Also, scenery is almost non-existent, other than a couple space ports on Earth

I have owned nearly all the Microsoft Flight sims including FSX

Since accidentally discovering and downloading ORBITER 2010 over 5 years ago I have hardly touched FSX,

It's hard to believe orbiter is free. It is absolutely fascinating There is so so much to learn. The people that have produced this are genius's in my opinion.

The feel good factor of achievement after you have navigated from Cape Canaveral all the way to Mars and landed at its space port is incredible (without running out of fuel and it took me four real months to figure out accurate interplanetary flight). Then fly back to earth with a re-entry speed of 15km/sec and land at Canaveral. What a challenge.

Try a Sun slingshot and reach a speed in excess of 120km/sec on your way to Jupiter. Even the planets and moons are all in real time positions. What is really nice is that it runs smoothly even on older machines (XP especially) and the space craft can be flown easily without a joystick - ...more

I am a real pilot and this product is the most close to real in terms of feeling.

How can you forget

One of the most specialized and highly realistic flight simulators ever, especially in the early 2000s. The level of detail thatbhas gone into the simulation, including an advanced, dynamic campaign system as well as the complex control scheme ensure that the player will be constantly learning during their experience.

This is early access. It is in a condition that is before you get to open the box. Given this proviso. It has all the hallmarks of a stunning 64bit flight sim. Very obviously bases on M.S.F.S. (No bad thing) and updated.
Very well worth a try. And you get to guide the future developements too.