Best Musical Movies of All Time

What are the greatest musical films ever to grace the silver screen?
The Top Ten
1 Sweeney Todd: The Demon Barber of Fleet Street

Who'd have thought that Johnny Depp, Helena Bonham Carter and Sacha Baron Cohen could sing? Shame Alan Rickman is the Pierce Brosnan of Sweeney Todd though.

Sacha Baron Cohen is such a scene stealer in this. I wish-a-to-know-a who has-a-the nerve-a-to say my elixir is piss? Who says this?

My absolute favourite musical and one of my favourite did as well. It's absolutely fantastic

Now we're talking. A musical with an actual story.

How is this #1? The story is boring, the acting isn't all that good, it has one of the worst morals I've ever seen, no one can sing, and it can just mislead young girls watching this. I mean, things like Sweeney Todd and Rocky Horror are pretty messed up, but that's what they're trying to be. This movie is not trying to be misleading, making it more aggravating. I'm sorry, but this movie just annoys the hell outta me.

I love it so bad. It's like a 70s GLEE and it's so, so good! Edgy, unique. Not only a musical, but a serious representation of the issues teenage has to face with. I'm telling you, I wasn't even born when Grease came in, but it's so relatable to me! I love Rizzo and Kenicky!

I just love Grease! It has it all! A carnival, great songs, a pep rally, a sleepover, a malt shop, everything! Romeo & Juliet meets West Side Story! It's far better than HSM! Jeff Conaway was so hot as Kenickie, it's sad that he died.

If it wasn't for Catherine Zeta Jones showing us "All That Jazz" (Chicago) we wouldn't have had Meryl Streep being a "Dancing Queen" (Mamma Mia), Helena Bonham Carter baking the "Worst Pies in London" (Sweeney Todd), Amy Adams looning for "True Love's Kiss" (Enchanted) or George MacKay promising to walk "500 Miles" (Sunshine on Leith).

Richard Gere prooves to the likes of Pierce Brosnan and Russel Crowe that some actors can sing. This is why Richard Gere should have been in Mamma Mia instad of Brosnan

With Richard Gere shows us how to "Give 'em the old Razzle Dazzle" while Catherine Zeta Jones shows us "All That Jazz".

How is this not higher?

4 The Phantom of the Opera

I think this should be credited as Schumacher's big comeback to success. It's also interesting how this movie adaptation does a much darker version of the title character.

This is certainly the best! I have been watching and singing this for most of my life. My name is based on this musical inspired,musical, my parents first conversation was about the musical that had inspired this movie musical, my whole existence relied on The Phantom of the Opera! Certainly the greatest movie musical ever made

This is a beautiful and accurate representation of the amazing musical and the casting is perfect. The only negative comment I have is that not all the songs are included from the musical and they could've gotten someone who could actually sing Carlotta's part

Hauntingly beautiful with It's Breath taking visuals,
Powerful music, tragic story and romance.
Your sure to get lost within the world of Phantom of the Opera!

This is was and still is my favorite childhood movie. It is the best musical movie ever created and my second is Grease. This is definitely a family movie and anyone will fall in love with it.

I surprisingly enjoyed this fun film! It got so many bad reviews, but it's actually not that bad! The songs are awesome and got me into ABBA!

One of the greatest films ever! A fantastic musical/film to watch multiple times and enjoy it each time. Absolutely amazing!

This should be the 3rd best musical of all time, I watched it many times just for the music. I loved the song where they were all statues and then they unfreeze, but my favorite song was where Meatloaf comes in on his motorcycle.

Cutting edge and shocking, but a musical masterpiece nonetheless. Grease should be in the top 5 as well.

I just watched this movie for the first time! It's messed up and I loved it.

Definitely the one of the best musicals!

Why is this below "Justin Bieber: Never Say Never" and "One Direction: This is Us"? This just means that more people need to watch it. This movie should be #1

Come on, people, Moulin Rouge! Is such a beautiful movie!

But all that doesn't matter as you will be entertained reguardless.

Keep an eye out for that blink-and-you'll-miss-it cameo from Craig and Charlie Reid aka The Proclaimers walking out of a pub.

Since this is a Scottish musical there's a lot of funny anti-English jokes as well as, for footballing reasons, anti-Glasgow jokes.

Unlike the A-list cast of clowns on Mamma Mia, everyone in Sunshine on Leith can at least sing in tune.

Whether it's the angelic charm of Jane Horracks (a big name in musical theatre) or a very grizzly sounding Peter Mullan and everyone in between, everyone is giving it all.

The Proclaimers songbook is completely indestructable in the same way as the ABBA songbook was. Includes Over & Done With, I'm on my Way, Let's Get Married, Letter From America and the big one I'm Gonna Be (500 Miles).

9 The Wizard of Oz

36? This is an all time classic! A mix of creepy and joyful along with a REALLY creepy sequel, I don't get how this can be below all of these movies!

I was scared of the cowardly lion as a kid, but now, I'm a brave young girl!

I love this film and I used to want some red slippers like Dorothy's. I still do to be honest

Easily one of my favorite movies. Not just musical.

10 The Sound of Music

Sound of Music is a classic show that set the staple for musical movies to come. Light hearted but with a beautiful heart and a thread of dark realism in the second act who hasn't heard one of the songs or seen that classic image of Julie Andrews' Maria dancing in the Austrian mountains? It's a legend.

"It's lovely bobbing along, bobbing along beneath the bottom of the Beautiful Briney Sea. What if the octopus, the flounder and the Call of Duty"... oh wait that's the more superior Nazis and Kids flick.

I honestly can't believe 'Step Up' is higher ranked than this brilliance. The story is brilliant, the songs, the characters, the cast... Absolutely timeless.

This really shows a bad taste some people today sound of music is a greatest musical of all time is the most popular and most famous.

The Contenders
11 A Hard Day's Night

I clicked this list and was scrolling down trying to find Moulin Rouge. Then I saw this one. I remember seeing it and laughing, loving the music, and realizing that they were all just average dudes at heart.

This is one of the greatest movies ever, and I don't like musicals.

It's a funny movie.

13 Beauty and the Beast

This movie has much better songs than Lion King, Pocahontas and Mulan! This is a wonderful, amazing, beautiful Disney classic!

I love Evita. It was a good, compelling, story and really made you think. The music was superb as well.

Madonna was very good, however the original Broadway cast was the best. Patti Lupone, Mandy Patinkin, and Bob Gunton were terrific. Saw it four times.

Not the Madonna version

Les mis made me laugh and cry and sing the songs 24/7... even if its one in the morning...you can't beat this movie. I mean, I dreamed a dream I could go see it in the theatre and I think Susan Boyle agrees!
#les mis

Not really sure how this is all the way down the list. Best movie ever; incredible music, actors, and beautiful story line. A masterpiece!

Aaron Tveit, Samantha Barks, and the barricade boys are amazing.

16 The Nightmare Before Christmas

Wait, why is the way down here? It isn't just the best musical movie, it's the best movie ever. Period. (except maybe the dark knight)

Oh, Danny Elfman. In terms of movie music, nobody else even comes close. (except maybe Howard Shore)

17 Fiddler on the Roof 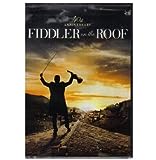 One of the best musicals put to film. The depth of emotion, the cinematography, the acting, and the music blend into a perfect musical film event.

I've only ever seen this live. The music is timeless, because seriously, almost everyone knows a line from matchmaker!

Rocky Horrror, Grease, and Mamma Mia above this? As a Jew, this deserves higher than all 3, but not number 1.

In this movie are amazing soundtracks.

It's impossible to choose just one great musical, so I'm going to remix it, thank you very much!

This movie is horribly underrated. With great songs, a 1960's theme, a murderous plant, and Steve Martin playing a sadistic dentist, how can you NOT like this movie? It's cheesy in a good way! This movie definitely deserves more recognition.

My god, why is this movie not in the top ten, it's a musical that is now well known among theatre people despite not being a actual musical yet. It's music is some of the best I've ever heard and it's just so comforting. Plus it's got many many awards for how good it is. I just can't wait to see this rise in popularity once someone writes it as a musical and it does fantastic on broadway. This is one movie that has the greatest sound track ever. Even though I praise this show, I don't think it's top, but it's easily in the top 5. This movie should never go below 10.

I sure hope Gosling and Stone win Oscars for performances because this has to be my all time favorite musical!

Should be in top ten.

What is this block of cheese doing ahead of Sunshine on Leith?

I watched this when I was a kid and even after all the musicals I've watched, this is still my favorite one.

I am shocked and disappointed that AFI's pick for best musical isn't even near the #1 spot.

This is considered the greatest mm of all-time. Don't know why it's at 14.

The fact that this isn't #1, or even in the top 5, is a disgrace. A crime has been committed