The Top Ten
1 The Dark Knight

Isn't it sad that people actually think that Twilight is good? I feel sorry for them, easily fooled by sparkling boys. The Dark Knight was amazing, a work of art.

Def. Best movie of the year. Heath Ledger... freakin best performance as a villain... of ALL time! I will be so ticked if he doesn't win an Oscar. The Dark Knight is my fave movie of all time. R.I.P. Heath.

Why is Twilight even on this list? Twilight should be named the worst movies in creation.
The Dark Knight is a piece of art!

While this movie holds top spot I must also say that Wall-E, Iron Man, and Eagle Eye are terrific.

I love Iron man! RDJ is a great actor and hella sexy as well. The movie had a great story line it was very entertaining. It had me at the edge of me seat. It had a marvelous and brilliant cast!

Yay this rules! Its funny too 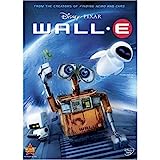 This truly is the best movie of 2008, and in my opinion, the best Pixar movie of all time. Firstly, there is barely any dialogue so you can see how good the animation is. Secondly, it features one of the best movie couples, EVE and WALL-E. Thirdly, the moral. This movie is all about the moral. DON'T LITTER. You'll see what happens. I rate this movie a 10/10, and I would recommend it to anyone who likes animated movies.

Leave a suggestion for what movie I should review next in the comments!

The most interesting animation you will ever lay your eyes on. It has a lot of good parts in it and perfect for children to learn about space and polution

I was born in 2008. And this is my favorite Pixar movie and my favorite movie that was released in 2008.

A Vision of the future, a future what really could happen if we don't make something but if it happens anyway we have to hope to have robots like Wall-E

This movie gets to much hate it's amazing!

I love this movie but it ANNOYED me at the end. They only did it so people would go " we don't know what happens!

It looks like Bond will never stop the entertaining action adventure

The Contenders
11 Horton Hears a Who!

This was a great movie! It had some of my favorite parts in it! Even the part where they sing "Can't Fight This Feeling" at the end!

14 The Curious Case of Benjamin Button

Twilight above? Who the hell vote here?

18 The Boy In the Striped Pajamas

Ah yes, one of my all time favorite Disney films.

By far the best movie of the year and not just because it won Oscars. Quantum of Solace was the #1 biggest disappointment of 2008.

Is it so underrated