This movie is really, really bizarre and strange. This one crowns the number one strangest animated movie on the list.

I actually saw that movie, and yeah it's pretty darn weird. Seen weirder though, but yeah.

Another film that is really bizarre and strange, yet it is pretty similar to Fantastic Planet. Also has such a strange set up as well.

This is an adult animated film that captures very beautiful imagery yet they're so trippy and strange at the same time.

4 Son of the White Mare

Its set up and animation is so unique yet strange within its standards.

This movie is so unique yet strange in its own way. Very underrated and pretty.

This movie has some truly bizarre elements in this movie, such as the Twin Pennies, the Sockworm, the Greedy, the Looney Land, King Zoo Zoo, Captain Contagious and Queasy... This one is like a fever dream or even a trip from having drugs.

I've watched this movie a few days ago and it was really strange and confusing to follow through what was going on, but still, I loved the animation and graphics.

This one is actually a mix between live-action and animation, but the animation in that one is trippy and memorable. That was such a strange movie! That's one movie I've seen as a kid.

The Contenders
11 The Thief and the Cobbler 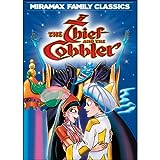 This film is a masterpiece! And yes, the reason why it's strange is because of the animation. The animation is very impressive and insane for something like this! Production lasted for 29 years, which is insane! This movie is nothing like any other film!

Ralph Bakshi's first attempt at a family picture which really was far from being family friendly.

This movie includes some odd yet amazing artistic imagery.

This movie is only for adults, but this movie to itself does have some strange yet fascinating imagery and animation.

It's like... you can't tell if this is creepy real or just random, modern animation. Door number one. Creepiest christmas movie ever

20 Everybody Rides the Carousel