As someone from Quebec, I always loved Asterix. I also love talking about it, especially the movies, since they all vary in quality. This is perfect for making a ranking of the Asterix animated movies. This of course won't include the live action movies, but everything else is fair game!
The Top Ten
1 The Twelve Tasks of Asterix

Let's be honest, one of the most genius parts part of Asterix books, and the movies when they are adapted from those Asterix books, is René Goscinny's writing and humor. Asterix not only wouldn't have existed without him, but it wouldn't have been the same without him either, even if someone else came up with the idea of Asterix. It was confirmed by the fact that once Goscinny died and that Albert Uderzo took his place for the writing, as much as Uderzo was amazing at doing all the drawing in those Asterix books, he was way worse at writing those books, and Asterix dropped in quality since. I say that because The Twelve Tasks of Asterix is not only one of only two Asterix movies to not be a story based on a previous Asterix book, but it is the last one to be directed by Goscinny himself! And the result is in my opinion the best Asterix movie we ever got! So first, let's take a moment to appreciate how much the animation has improved since Cleopatra. This was the point where Asterix's ...more

This one was hilarious!

This is the other movie that was directed by Goscinny himself (as well as Uderzo), and who would have thought that the geniuses behind the Asterix books would also be very good at making movies? I will say the animation of that movie didn't age the best, but what's great is that unlike Asterix the Gaul, thanks to excellent pacing, and taking advantage of the fact it is a movie and not a comic book, it is still an engaging movie to watch with its animation despite that. What I mean by that is that it is super cartoony, we don't have awkward pauses to bore children watching the movie, there are scenes that are carried by how funny they are visually, and what better way to take advantage of the fact you are in a movie, than with songs? These songs are true classic, and everyone in Quebec and I assume France too, must know about the arsenic cake song to not be considered uncultured. And the dialogues man! This is probably because I grew up with this movie a lot, and know it almost by ...more

3 Asterix and the Big Fight 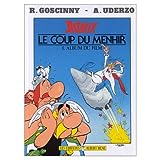 I don't know why Asterix and the Big Fight is that good. You see, for me, and probably other people as well, Asterix is primarily based on humor. How funny an Asterix book or movie is defines how great it'll end up being, and some of the weaker Asterix stories, especially the movies, tend to be more serious stories, with less focus on the humor, and as a result is less funny, and less good overall due to not being that good at making serious stories. Turns out however that Asterix and the Big Fight is an exception. When you take a look at scenes like when Panoramix gets hit by that Menhir, you see that this movie takes scenes much more seriously than most Asterix stories. However, it is a movie that is actually legit REALLY good with more serious and emotional scenes, so the focus on more serious events doesn't hurt in any way! We also has one of the most interesting villains in the franchise, which is good for this kind of story. That scene where Obelix picks up Asterix after he ...more

5 Asterix: The Mansions of the Gods

This was the first Asterix to be made in 3D, and it's pretty good! Now I do think the way they focused more on that family that won a place at the mansion of Gods was kind of mishandled in some ways, but other than that it is still a really funny Asterix adventure, that also has pretty high stakes that makes you care about what'll happen.

Asterix the Legionary is my favorite Asterix book of all time. Probably one of the funniest fictions ever made. Now, I say this because Asterix versus Caesar is one of the few Asterix movies that are based on two books at the same time. Asterix the Big Fight, despite being titled like the comic of the Big Fight, it is basically Asterix and the Soothsayer with Panoramix getting hit on the head by a Menhir like in the Big Fight instead of just being gone for a trip, the live action movie God Save Britannia is SOMEHOW a mix between Britain and the Normans, and, Versus Caesar is a mix of the Gladiator and the Legionary. Now, even the Legionary part isn't as good as in the comic book, but it is still the Legionary at the end of the day, so it is still very funny, and even the Gladiator part is quite good. It's even the Asterix movie with the only case of a character falling in love that actually makes the movie better. Like seeing Obelix in love with Falbala is super funny and kind of ...more

This is the first Asterix movie, and an adaptation of the first Asterix book. In fact, it's almost copy paste to the first book, and pretty much to its detriment. You see, when you adapt a book into a film, you need to make changes that would make the pacing of the movie better. Asterix in Britain, despite being very similar to the book of the same name, did that pretty well. This one however, not only does it not help that the animation is kind of dated, but also there are so many awkward pauses, the movie goes from scene to scenes like if you are reading the comic book, except it doesn't work like. And that's not the only issue it comes with. When I was a kid, the slow pacing of that movie was something I really didn't like, because it made the movie feel long, even though it isn't really. That being said, it isn't at the bottom, because at the end of the day, it has most of the things that made the first Asterix book great, and it is still a funny time.

8 Asterix: The Secret of the Magic Potion

Something about that movie that made me... sceptical to say the least, is that this is the first, and so far, the only Asterix movie that isn't a Goscinny story in any way shape or form. It isn't based on a comic written by Goscinny, and unlike Twelve Tasks, it wasn't directed by Goscinny himself. And that does mean something, since Goscinny was a big part of why Asterix was so great. That being said how was it? Kinda good I guess?! I really want to love this movie guys. This is one of the Asterix movies that tries to be more serious, and the worst part is that it does some really good attempts multiple times at making some impactful and emotional storylines that could have been really interesting to follow. But that's the thing! It did MULTIPLE attempts! And perhaps it should have attempt less or make the movie longer, because none of the storylines this movie shows reach their full potential, and kind of nothing really happened in the end. It is still a somewhat funny movie, and if ...more

If there is one Asterix movie that suffers from focusing more on a serious story rather than being funny, it is this one. When I was a kid, I thought Asterix was much better than Tintin and that was because of the humor (in fact I still do, but that's besides the point), so like this was my least favorite Asterix movie to revisit by far. It does have beautiful scenery and music, and it's not like the serious moments aren't good from time to time, but it's not like they carry the movie's lack of humor either. It's not like it's never funny, but it is overall the least funny animated movie in the bunch, and I think all of this makes it a movie that really isn't great.

10 Asterix and the Vikings

Now I will say this movie is funnier than Conquers America, and the animation is really superb, but despite that it is still my least favorite Asterix movie. While some jokes are really funny, a lot also aren't, and most attempts at being more serious aren't that good either. I just aren't that invested in the romance that is at the heart of the story, and most people I know who have seen this movie also think it isn't great, so it's not really an unpopular opinion.