The top ten Punk releases, excluding singles, from 2021. I felt 2021 was a decent year for the genre. In fact the past 5, 6 years has been solid for Punk. The scene may be bigger than ever here in Southern California. Please feel free to add any genre of Punk to the list if you feel something is missing and belongs. Also, I know that what seems to be the two main Punk albums of 2021 everyone online is raving about are not on the list (unless someone adds them). Those albums are “Glow On” by Turnstile and “Comfort For Me” by Amyl and The Sniffers. Why? Cause the Turnstile album absolutely sucks and the Amyl and The Sniffers album is barely OK at best in my opinion. Amyl and The Sniffers S/T album from 2019 is 10X better than the latest album to me. Rawer. The new one seems a bit over produced for their style on top of being overall kinda weak. So that’s why you’re not seeing what seems to be the two most popular Punk albums of 2021 on this list. But if you feel they belong, go ahead and add them.
The Top Ten
1 Life Is Pain Idiot - Liquids 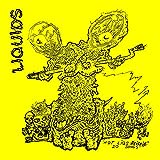 My favorite for 2021. I really dig this band out of Indiana, well actually, dude. Most of Liquids recordings are done by one guy, Mat Willams who was also a member of The Coneheads (great unique now defunct Punk band). Not sure if this album is all him though. Anyways, there sound is right up my alley. Not sure if anyone notices but I am real big on raw 70's style Garage Punk and Hardcore. This band is like a hybrid of both. Also, almost all of Liquids previous releases, with the exception of Nervous Sessions and maybe a couple of others, are great but low quality production/recordings. This album has decent production/recording quality while keeping the rawness. Cool to finally hear their/his music on a good quality produced album. This album was released in 2021 on MP3 and cassette. Plans on a vinyl release in 2022 which I will jump on the moment it's available. Favorite tracks : More Than A Friend, Same Mistakes, Violent, Give Up, All U Say, Bottomless Pit, Shutter.

The Southern California legends released an amazing record in 2021 of previously unreleased material from the early 80's (pre Milo Goes To College LP) before Milo joined the band. They had Milo redo the vocals, remastered it and released it as this album. I loved this album cause it has that 80's Descendents sound. The re-recording of "Ride The Wild" I think is awesome. The drumming, Milo's vocals... man, I really dig it. A must have for Descendents fans. Favorite tracks : Nightage, Ride The Wild, My Hair, Crepe Suzette, Lullaby, Sailor's Choice.

The best album released out of the U.K. in 2021. In fact, I believe this is the best album from a new or newer U.K. Punk band in a long time. Best album from newcomers in 2021. Their first full length album and they came out hot. Oi/Hardcore Punk at its finest. A must listen for Punk fans. Favorite tracks: So Do I, Come See Me, Nation's Pride, S**t Life Syndrome, Force Fed, Common As Muck.

Ska-Punk album of the year from this Southern California band in my opinion. Even with the change in their frontman, they didn't miss a beat with this record (Voodoo has always been solid with their releases). Great record through and through. My wife and I digged this album so much we caught them touring it twice this year. Ef is the best frontman in Ska-Punk in my opinion. What's cool is they're in studio now working on a new album already! I can't wait! Favorite tracks : The Karen Song, Generation Genocide, Living The Apocalypse, The Walking Dread, Make America Skank Again.

First full length studio recorded album from this Canadian D-Beat Hardcore Punk band. You like Discharge? Give this album a try. Was looking forward to this album before it's release and it did not disappoint. Favorite tracks : Herd The Sheep, Conventional Life, Two Faced, Losing Game, Divisive Pleasure,

Another good Hardcore 6 song EP released in 2021. Chain Whip, out of B.C. Canada, is one of the better modern Hardcore Punk bands out right now. I do like some of their previous releases better but this EP is still good. Favorite tracks : Fresh Paint And Philanthropy, Laguna Beach, Two Steps To Hell, Death Was Too Kind ( Subhumans *Canada* cover)

First full length studio recorded album by female fronted Hardcore Punk band out of South Korea sung in English. I was actually blown away when I first heard this album. Didn't expect something like this to come out of South Korea. Great Hardcore with awesome delivery. Looking forward to future releases and catching them live when (if) they come to Southern California. Favorite tracks : Enemy, How Did It Feel? Stagnation, Effigy, Travesty.

Third album, first since 2018, for this female fronted Punk band out of Long Beach, California. They are a GREAT live band. Their singer, Jenny Angelillo, is a fun, high energy front woman. I do like a previous album better than this one but this is still a good solid release by Neighborhood Brats. Favorite tracks : LeBron James, FFBF, Signs And Semantics, Harvey Weinstein (Is A Symptom), I Want You.

Formed in the early 80's and one of the founding fathers of the Nardcore scene. These guys are a popular underground band (yes, I know that's a contradiction but you know what I'm saying) here in Southern California playing a lot of underground shows and back yard shows. Even though they have been playing that long they only officially released one EP and one demo album. So technically this is their first full length studio recorded album. Grabbed a copy on vinyl from The Nardcore After Party Show at Punk Rock Bowling which they were playing at. Good Hardcore (a bit sluggish) album. Happy for these guys finally getting a LP out after all these years. They deserve it. Favorite tracks : Resurrectionists, Dead Mind, Propaganda Control, Distroyed, Konflikt.