Considering that dinosaurs are among my favorite animals, this list was kind of needed for me.

A dinosaur game does have a lot of potential, and trust me, I've played a lot since my youth and genres can vary, from horror to simulation and so on forth. In addition, I'm adding games where dinosaurs are the primary focus of these games, so there isn't gonna be a Mario game in it just because it has Yoshi in it, sorry...

So, which dinosaur game stands out to you the most?
The Top Ten
1 Dino Crisis 2 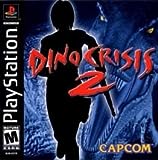 I have childhood memories with this game and I often come back to play it again. While the original Dino Crisis was great, the sequel did a lot for improvement (for me at least) such as more weapons, a more streamlined and easier-to-follow narrative, an interesting story and lore and of course more dinosaurs and after completing the game, you unlock a few modes where you actually get to play as a dinosaur for once. Overall, this remains a nostalgic icon for me and it will for many years to come :).

Probably the closest we've gotten to creating a proper Jurassic Park (The handheld apps don't compete and I'm excluding Zoo Tycoon mods). Outside of building a park, there were a few modes which you could partake in. Overall, great potential, I just wish there could be a sequel :/.

Think Jurassic Park meeting Resident Evil. This game did freak me out and it probably had the scariest T. rex I've ever seen. I love the atmosphere and suspense put into this game and it does make you think about how you're gonna use your weapons wisely as you would really need them as the game progresses. Definitely a must-own for horror fans and dino fans.

I have high hopes for this game. Realistic animal behavior, up-to-date research on the Hell Creek Formation, great Kickstarter campaign and the fact that you get to live the life of a dinosaur, yeah I'm begging to be counted in :).

Another nostalgic classic. Sometimes I still play this game again, although I don't enjoy it much as I fully finished the game beforehand :/.

Adding this because of nostalgic value. However, the game can bet better if you decide to mod it by downloading from ZT forums sites and placing the files into the ZT2 folder on where it is installed. However, its lower because for a full dinosaur experience, you might want to mod it...

I loved Lego Star Wars, so I wasn't too surprised when I liked this one too :). Not as good as Star Wars, but this one still had a lot of extras outside of the main story and I did enjoy the parts where you play as the dinosaurs (Who doesn't? ).

How is this lower than a Jurrasic park LEGO game!? This game is like Minecraft with dinos, and might even surpass it! This is, without a doubt, THE best dino game! If you like another one better, than you haven't played this one yet!

This was pretty cool

Should be higher up

At least its made by Nintendo itself (Surprising how the company ripped itself off :P). But seriously, this was a fun game to play and there were things in it that differentiated it from Pokemon. I just wish Super Smash Bros. made some form of reference to this franchise, such as a stage or assist trophy.

This was honestly the best dinosaur game I played when it comes to handheld apps. The graphics were great and the dinosaur selection was pretty diverse. Oh, and the guns were badass. I just hope the game just offered more than what it had, hence why its just 10th.

This is the best video game in video game history! I like it so much that I play it every day! It should be #1 in Best Video Games in history!

Honestly, this is the better Zoo Tycoon game when excluding using any modding. But unlike Zoo Tycoon 2, the modding in this game just doesn't work as well unfortunately :(. Still a great simulation game by the way.

I love this game. It may be pure hackers, but it's also pure fun. You can be a Dilophosaurus, Oviraptor, Compognathus, or Velociraptor. The graphics are decent, bullies are uncommon, and it has several different lands to explore. It is MUCH better than Wolf online! That atrocity has THE worst community I have EVER seen. You can barely move without some jerk killing you every 3 seconds. I have only met ONE nice person on there. Play Dinos Online. It's a masterpiece!

I agree I love this game!