This list is made for Sims 4 users that can find a reasonable or a good stuff pack to buy. I recommend them in this list, so you don't have to waste your money (like I did).
The Top Ten
1 Cool Kitchen Stuff

Cool Kitchen Stuff at first seemed like a joke to me. I thought that it was a waste of $10 Bucks. But when I got it, I fell instantly in love with the Create a sim objects. There is not one pack that I do not use as much as the Cool Kitchen stuff. The CAS items are great, and I build and use kitchens a lot. Great Pack!

It's a great pack if you're always in the kitchen and cooking! It doesn't add a lot of new game play but it's a really, really good pack! The CAS items are pretty awesome and it adds more kitchen items and it looks modern too! I do love the pack, defiantly recommend.

You gotta have kitchen stuff, it's the centerpiece of every house. Having nice stuff for it is always a plus in my book.

It's ok... but could be better

Bowling night stuff was good, it had bowling and I bowl a lot in real life. Lots of Retro and some objects that are a staple in my building. Some CAS items are good as well. If you love the retro era and items, this is a MUST have.

It's a very good stuff pack because it adds an extra fun activity that you can do. Bowling is easy and fun for all Sims!

If you like the mid century style, this is the pack to go. it also has a lot of cool CAS items that I use on every sim. however I never use the actual bowling thing,non the less it is a great stuff pack.

I wasn't completely sure about this when it was first announced, but I'm a big fan of it now 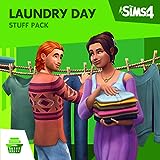 It is really cool seeing my sims more realistic, like doing their own laundry. If you don't really like gameplay features this is probably not the pack for you.

I don't give my Sims laundry rooms or anything from laundry day stuff, good concept but should have just been in base game.

It adds many new CAS items as well as build mode. You don't have to use laundry if you don't want to. Just don't put a washer/dryer and a hamper.

Great if you're into realistic game play! The pack also comes with a bunch of cute boho clothing, I highly recommend it.

-HOT TUBS, AND GOOD ITEMS, is all you need to say. No items were good or bad. It was the first stuff pack I got, and I didn't regret this at all.

I think that the hot tub is a nice touch to the game!

Wow, I love movies, so I had to get this. It had BAD ITEMS for normal sims, but awesome FOR HIPPIES. So… This should be called the hippie pack. But I also like it because, the items are more unique. Its up to you to have some of these weird items in this game. Also my sims live off of popcorn, so its good to have.

I like that you have the theater screen and popcorn maker. The movies are a nice touch and your sim develops moodlets depending on the film.

This really adds a new style to the game, which was needed!

I like this quite a bit, and I really like using the new Vanity Table for my lady sims. It actually feels like my women sims are getting ready for a real party or good event. Most objects are good for use, but I really think this pack does the best at showing you what it really is. Its straightforward honestly how the content looks. So if you are interested in getting the pack, there will be no surprises.

I have this stuff pack and there are some many options to do with it. For Example, you can hire a butler to do your house job, this give you a heap on vintage furniture and the clothing is very beautiful.

The addition of the butler is a really nice thing to consider in this pack. Especially if you want to have children but really don't want to take care of them.

Butlers is a big gameplay element and not as broken as I was sort of expecting? plus, there's some good stuff in here. It's not tacky or ridiculous looking stuff like the CAS items for luxury party stuff.

I didn't really thing about Luxury Party much, until I was making a big project, and I needed it for the project (20+ hours). This pack has quite a lot of CAS items. So that's good. The thing that it does to shot itself in the foot, is 12 Build and Buy Objects. If you are looking to get this pack, don't expect Build and Buy Objects.

This is the only other pack I wanted to get, I love making gardens and using a wishing well sounded really cool. Also a great tip: Use this with get together. An Expansion Pack I highly recommend.

This is the only stuff pack for Sims 4 I have, and I really like it. Kids are my favorite life stage in sims 4, and this pack adds a lot of stuff for them. Also, Void Critters remind me of Pokemon, and I LOVE Pokemon.

Kids Room stuff is something I don't want, and I don't use a lot of. This pack can be bought if you use kids a lot in your game. Go ahead and buy it if you like kids a lot, but this pack is not one of my favorites.

This pack is really good if you spend a lot of time using kids in your game, it has plenty of decorations and is perfect for new items to fill your kids rooms with!

I love all the games and childrens room items that come with this pack! And I adore the pokemon-like game and cards.

The hair styles and outfits definitely add something (I finally have ballies for my little girls with textured hair! ), but the toddler play area objects are the real selling point for me. The animations are adorable and they help the kids build skills. I would say this is a must-have if you enjoy helping your sims earn the Top-Notch Toddler advantage.

Toddler Stuff. Oh Boy. This pack is another preference pack for you. If you like toddlers, then I highly recommend this. But I don't like kids, so... It Makes sense. And one more thing, the ball pit should of been a sandbox.

I love toddlers and this pack adds so much more to it! There are SUPER cute outfits and objects!

UMM… This pack is only #10 because of headphones, and the CAS items. But with no original Build and Buy objects. It's a retexture for most of them. Oh, and working out in front on a television is good (should of been in base game). Lets not forget the climbing wall (the most forgettable part about this pack). WHO WANTS TO USE A FIRE BREATHING, MECHANICAL CLIMBING WALL?!? I'm sorry, I ranted there. This is actually a bad pack because I really don't think they put much effort into this. This pack is not a pack I recommend.

You will have a great couple of months with this, but when a year passes after you buy it, it becomes repetitive. The same people, the same activities, the same "edgy" food, the same festivals. It's super fun to have in the beginning don't get me wrong. Just not a long time thing. After you have it for a while, it's only purpose is for machinamias.
Don't fully recommend it unless you do Sims 4 Machinamias (however they're spelt)

Its kinda rude of people to call the food in City Living "Edgy" and the names "
Weird". It's a great pack (Although NOT a stuff pack, if it was it would be a great deal though) and the food and names are not "edgy' or "weird", they're from other cultures, so maybe their NOT Frank and Beans and Pizza, but that doesn't make them "EDGY" it just makes them CULTURALLY INCLUSIVE. Now, if there was a Demon Lord pack where you could eat humans and souls, THAT would be "Edgy" food.

I think they should have just added this into the actual expansion "cats and dogs" as the expansion itself was lacking in the items for your pets, all this stuff pack did is add little costumes and decor oh and not to mention a hamster.. feels like a waste of money but if you must go for it

It's a meme in the simmer community it's so bad. My first pet stuff am I right?

This is a great pack, but it's an EXPANSION, not a STUFF pack. You can't compare this to nifty knitting or tiny living or say that it has more content, because this costs more, and is designed to be a bigger expansion to the game. It shouldn't even be on this list.

This pack makes the game so much more realistic, it has some beautiful build and buy items and some really nice CAS items. I also love the calendar and holiday aspects it adds.

A great way to make the gameplay more interesting and realistic. If you are one to like holidays, then this is the (expansion) pack for you!

I mean you can get cats and dogs, which was obvious. This was my first ever packs, and it's still one of my favorites. (to be honest, I love ea and every sims pack, and I don't really even have a favorite, but still)

I love this expansion Pack! Getting to actually work with you sim is amazing. I still think that the price is a lot but, swings and roundabouts.

The only reason this pack is not higher on the list is because it is a game pack. Totally awesome though.