Submarine games have come a long way since the Periscope arcade machine from the 1970s. Once they began making sub games for PCs, any Joe could be the captain of Das Boot. Taken in the context of the time it was released, which subsim is the best of all time?
The Top Ten
1 Ssn-21 Seawolf

Seawolf involves a "world crisis" scenario where you are ordered to hunt and kill Russian (see, it is a classic) boomers, Alfas, Oscars, frigates, landing craft, and whatever else they put in your way. You command a Seawolf class nuclear submarine, capable of astonishing underwater speeds. You have a choice of individual missions or the career plate. The missions are accompanied with a cheesy video clip of some computer programmers masquerading as news reporters. Once the mission begins, you utilize a waterfall display to isolate and classify the surrounding vessels. It always seems like the ocean is well-stocked with porpoises and whales. But somewhere, you can bet, there's an Akula class boat or a bevy of missile frigates looking for you as well.

Silent Service II wears the description classic more like a '65 Mustang. As the commander of an American submarine in W.W.II, you hunt the Pacific for Japanese merchants or warships. The sim offers single and random missions and a career mission. You can choose from a wide variety of subs, and historical or flawless torpedoes. In the career mission, you get historical updates about actions being fought in the Pacific theater.

Am still playing it via DOS Box on a Win-10 laptop!

Fast Attack was released in the beginning of 1996 as a Los Angeles class attack sub simulation. There have been a few notable nuke subsims before Fast Attack--688 Attack Sub, Red Storm Rising, and Seawolf SSN-21. None holds a candle to the tense action and rigorous pacing of Fast Attack.

You get an acute sense of isolation playing Grey Wolf. The verbal responses to your orders sound as if they are coming in over a cheap radio. (This was later explained to be a recreation of verbal orders transmitted through the voice tube, or gooseport. In that context, the voices sound authentic). On the plus side, you can examine the boat from bow to stern and view some really pretty graphics of the diesel room, torpedo room, and a very clean control room.

5 Aces of the Deep

Command Aces of the Deep was a really good submarine simulation. It forced a paradigm shift of ratings of all previous subsims. CAOD was leagues ahead of the competition at the time of its release, holds its ground years later, and is a shining example of a subsim done right. It is one of the few sims whose rating hasn't slipped as newer and better sims have been created. 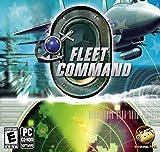 Imagine the geopolitical situation of the near future. Russia has fallen on hard-liner times. China is on track to become the world's #1 economy and isn't too proud to gloat about it. Not to be left out, India flexes its newfound nuclear muscles. All of a sudden, it's not safe to live in the Kurile Islands or Taiwan anymore! Who're ya gonna call? Why, the U.S. Navy, of course. Jane's Fleet Command sets up that scenario and puts you in charge of the U.S. battle fleet, where you direct carriers, subs, missile cruisers, and planes with individual control.

Jane's 688(I) takes its name from the 688 (Improved) Los Angeles class of American attack submarines. The first of the class was commissioned in 1975, with 62 vessels built all together. Measuring 362 feet in length, 33 feet across, and displacing 6080 tons (6927 submerged), the 688 submarine is capable of firing wire-guided Mark 48 ADCAP torpedoes, Harpoon anti-ship missiles, and vertically-launched Tomahawk cruise missiles all over the place. The 688 has been America's premier warship, believed by most to be without equal in the world. If you want to immerse yourself in a billion-dollar, state-of-the-art nuclear attack submarine, and experience the tension, drama, and exhilaration of relentless world-in-the-balance naval warfare; this subsim is your ticket.

Silent Hunter lets you walk in the shoes of such famous American sub skippers as Dudley "Mushmouth" Morton, Richard O'Kane, Sam Dealey, Bud Gruner, Freddie Warder, and George Grider, to name only a scant few. You wear the skipper's cap and command an American submarine in search of ships of the Japanese Empire. Like the successful Aces of the Deep series, Silent Hunter takes the familiar elements of submarine warfare and brings you even closer to the experience.

Sub Command missions are scripted but they offer a wide range of randomness and variety. Producer Kim Castro says that a campaign needs direction to be something more than a series of "go hunt" missions. There's no way to accomplish that without some prepared mission design. But scripted does not have to mean playing the same mission with the same ships in the same places. A big part of a nuke subsim is detecting and performing Target Motion Analysis (TMA) on contacts. Sub Command scenario design allows for dynamic groups, probability of inclusion, and random placement. So the mission you play once could have a whole new set of ships and subs, each with different goals and ROE, in vastly different starting locations. You won't know where, who, or what as you replay the mission.

Gameplay takes the form of single missions (eight missions plus three training missions), randomly generated convoy encounters, and a historical campaign (21 missions). The single missions are well designed but there aren't enough of them. If you play one a day, you get a week of action. The campaign is even better designed, spanning the war and indulging the player in many of the historical high points of the U-boat war, such as the Scapa Flow attack, Dunkirk evacuation, Operation Drumbeat, severing the British lifeline to Malta, and more. The overall feel while playing the campaign is notable. Radio messages come in remarking on the progress of the war and your sub is upgraded as a result of your success. You get medals, too! Every campaign mission has a specific primary objective that must be accomplished or you are expected to replay the mission (there is a way around this, see Tactics & Tips). Campaign missions are autosaved when exiting the game, single missions are manually ...more