Top 10 Video Games that Needed Sex Appeal to Be Successful

As the old saying goes, sex sells. When in doubt if a product will succeed, just add a little sexiness to the mix and you're good to go. Video games are no exception. However, sex appeal only goes so far. Once players are able to get past all the slim figures, the cute faces, the exposed skin and the balloon sized breasts, more often than not they'll see all the flaws hidden underneath. Here are ten examples to start with and feel free to add more or comment. Because there's bound to be a lot more than 10 games that needed sex appeal to sell.
The Top Ten
1 Tomb Raider

This entry shouldn't come as a surprise. Released in 1996 for the Playstation and Saturn, the very first Tomb Raider followed the exploits of the buxom archaeologist Lara Croft as she ventures the world looking for magical artifacts. What people might (or might not) know is that Lara's breasts weren't suppose to be as big as they are in the final product. When Toby Gard went to enlarge Lara's breasts, he only intended to increase the size by 50%, but a slip of the hand made them 150% bigger and couldn't undo the enlargement due to pressure from his coworkers. It's a good thing he listened because aside from Lara's model in the FMV cut-scenes, this game has aged horribly. If it wasn't for Lara's iconic macromastia, it's unlikely her career would've made it past one game.

When you look at the Senran Kagura series, you'll notice that almost all the females have large breasts. But why? When Kenichiro Takagi took a gander at the 3DS in 2010, he asked the question; "What is the one thing people want to see in 3D the most? " And he thought of breasts in 30 seconds. And lo, a franchise began to take shape. The game focuses on a bunch of very attractive Japanese girls who train to become shinobis in secret and there's a lot of clothes destruction to go along with it. With the exception of the spin-offs, the games all follow the same formula of going from point A to point B beating up bad guys in Dynasty Warriors fashion and the game play can get repetitive at times. As of this list, Senran Kagura: Estival Versus for the Vita is the highest rated game in the series on Metacritic with a score of 71 so it's very telling what was necessary to keep the franchise going these past eight years. However, with Sony's censorship policy, the series creator left Marvelous ...more

When Dead or Alive hit the scene in 1996, it shook the fighting genre up with the ability to grab opponents and fling them across the arena. Th edge of the arena was also laden with explosives that deal massive amounts of damage. And while the original game did feature female fighters with jiggly breasts, this was just an extra. However, as the fighting genre continued to evolve, the Dead or Alive series has had to rely more and more on sex appeal for the franchise to stay afloat. And while Team Ninja is definitely trying new things with each new installment, it's pretty obvious that the sex appeal is here to stay.

This has got to be one of the weirdest games to ever be released on the Wii. You control a group of overly muscular men as they march through various environments in a quest to get back their sacred protein powder. One of the factors about Muscle March is that it uses male masculinity to sell the concept, which is pretty rare. But it seems to be necessary. You must move the Wii Remote and Nunchuck to strike various poses to match the holes in the walls. Seriously, can you think of this concept working without throwing in a bunch of Arnold Schwarzenegger wannabes? It's just a shame that this game was a WiiWare exclusive.

People were pretty excited about getting a suped-up version for Ninja Gaiden 2 on the Playstation 3 with various extras, but were bummed out because the violence and gore was to be toned down. The answer? Sexy gimmicks. In by shaking the SIXAXIS controller when one of the playable females were onscreen, you could shake their breasts. There was even a Japanese commercial devoted to this one concept and it's best to look it up yourself. But hey, when the violence and gore is lessened, you need a good substitute. Naturally, this feature was also included in Ninja Gaiden 3 where the players could make any gals ample bosom bounce on command.

In case you're confused, Labyrneath is a flash game created by 44Magdalene and appears on flash sites including Newgrounds and Kongregate. You play as Delva, a hot female protagonist as she runs and jumps through ruins filled with traps. While people complemented on the gameplay and music, it got some criticism for how Delva had balloon-sized breasts. And it's not without merit. It's considered one of the best games of 2018 on Newgrounds and even placed 3rd in October 2018 on Kongregate. But that's only because of the character design. If the playable protagonist was anyone other than an attractive girl with macromastia, it would've been nothing more than another forgotten flash game lost to the recesses of the Internet. And yes. It actually got a sequel and won 2nd place for best game for April 2019 on Kongregate.

Ah, yes. The infamous rogue-dungeon crawler that Sony pulled the plug on. In this JRPG, you play as a bunch of school girls on their quest to obtain the Holy Grail of Beauty. While the graphics and gameplay look pretty primitive, the gimmick here is that all of the playable party members are female and their breasts increase in size as they beat up monsters. There are also many other raunchy moments in the game you can find out for yourself. The game was suppose to have been released in North America sometime in Summer 2018, but the newly appointed CEO Kenichiro Yoshida felt that this game would give the Sony brand a bad name and ordered its oversees release canceled. However, D3 got back at them a year later with the release of Omega Labyrinth Life and Labyrinth Life on the Switch and PS4 respectively. While the Switch version sold 6643 copies in its first week, the PS4 sold only 1977 copies. Ouch! 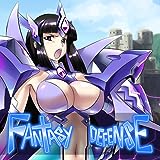 Known as Fantasy Defenders in Japan, Fantasy Defense charges players with defending Crasto from hordes of monsters in a Tower Defense style challenge where you have to defend your crystal from waves of monsters. As you can probably tell by the icon, the developers probably thought that they needed to make the females super sexy if they wanted the game to be profitable. Despite the questionable amount of mammary glands and lack of body fat and clothes (especially in the Japanese version), Fantasy Defense was one of the very few games available for free or cheap where in-app purchases truly felt like a luxury and not a necessity. Sadly, with the latest iPhone firmware updates, it seems the original is no longer playable on iPhones, although Android users can still enjoy it.

When Dragon's Crown was released, it received universal praise for its superb art design and beat 'em up gameplay. However, it also received quite a bit of flack for its sexualized female characters. The Sorceress is easily the most recognizable character in the game when talking about oversexualization with her huge breasts and racy outfit. Then there's the Amazon who only wears a bikini and Roland the Brave who could easily beat Arnold Schwarzenegger in a body building contest. This game maybe great, but it's pretty difficult to overlook all the sexual innuendo that's present throughout.

If you're not familiar with the Time Tenshi games, allow me to fill you in. They're a series of games/graphic novels developed and published by Silver Cow Studios about a bunch of girls that travel through time to do research…..or something. But a rival company called Chrontek is able to hack into the time machine and plan to use it for their own personal gain. The main selling point of these 'games' is that only females can safely use the machine and their breasts grow to massive sizes whenever they travel back in time. And I'm talking true macromastia proportions here. There is a story in these games, but many players will be too busy ogling the girls' oversized you-know-whats to even care.

*smirk* Remember when this game got censored hard in the US?

Encore didn't do much to improvement, actually, Encore censored a lot more. It was even censored in Japan.