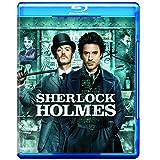 As a Sherlockian I was bit puzzled which story of Arthur Conan doyle it would relate. This film dazzled me, Thanks "Guy ritchie" for making it, This particular plot is not from Sir Doyle's corpuses. But it justifies in best possible way of what Sherlock Holmes was

My favorite character is also Sherlock Holmes. The acting of Robert Downey Jr. & Jude law is very impressive. I give five star to this movie. It's a awesome movie. It must be seen by everyone. Please please please watch it.

You would think that everything that could be done with the Sherlock stories has been done, but this film is like a breath of fresh air. Watched it three times now.

What a good film this is! The plot is unpredictable. Everybody is strongly recommended to watch this great movie.

Great movie! This should definitely be higher than number 10, it deserves better. Since this is one of the best detective movies out there. Should be number 1 or barely number 1! But sure is many people who don't have seen this film, a lot more that have seen sherlock holmes so they just vote sherlock.

Good atmosphere, story and twist at the end. All the actors deliver great performances. Must see for anybody, anywhere.

It's an incredible movie! It's got Morgan Freeman and Brad Pitt, how can you beat that

Great movie overall, not just "good detective genre". Lots of plot twists and action that ll keep you on the edge of your seat

3 The Silence of the Lambs

Based on famous detective, horrible, mysterious novel that the movie has improved these character of murder and violence childhood. palpitating!

THE ONLY WAY, you can keep up with this movie is by rewind and review! You won't get it if you watch it all the way through without interruption. Well that's my opinion anyway! I'm in my late 60s now and just got around to viewing it about 10 years ago and it blew me away. I instantly became of fan of Bogart after multiple decades of wondering why his adoration seemed timeless. He was absolutely off the charts in this movie. I remember hearing only Jack Nicholson could do any Bogart remakes and that's a big negative! I doubt if they'll ever be a remake of this movie... you will never improve on it, never! I only wish the young murder mystery fans will check it out!

This list proves that it is mainly younger adults and kids that do most of the internet surfing. Most of the probably haven't even HEARD of The Maltese Falcon, let alone seen it. Falcon, Chinatown and The Big Sleep should be jockeying for positions 1-3 on this list. Bad Boys?!? Really? And Shawshank, while a great PRISON film is NOT a detective film, so how is it even a"contender" in this category?!?

Whoever said that it's mainly younger adults that do internet surfing, why shouldn't they vote for what they want? I have no issiue on people voting for Bad Boys and Sherlock Holmes franchises. Will Smith and Robert Downey Jr have charisma, that's why people vote for them. It's old farts spamming the crap on this lists for ancient movies that won't be relevent for modern audiences.

This is a silly list. Dumb movies like Sherlock Holmes and Bad Boys II ranked above Chinatown and The Maltese Falcon. Go figure.

This is by far the best detective movie. Think about the complex plot, all the way to the twist at the end. Its excellent.

Chinatown is the greatest. Period

A great movie! It's not just a cheap detective, it's a deep, very tender and philosophical thing... The X Files the best!

Do I really need to say why? I mean, Mulder, Scully, does anybody need anything else? I don't think so! I need them back!

One of the best movies with double plot! Great characters' storyline between Mulder and Scully! Love them!

It's a real classic of T.V. shows. It was balanced movie, with great characters and basic aim with humanity. I really need them back

The Contenders
11 The Big Lebowski

14 Sherlock Holmes: A Game of Shadows

This movie is just 'overthrow' its previous sequel. The storyline is more complicated, more complex, but also very genius, very smart, and there's a lot comedy scene too. Holmes and Watson relationship is more 'intensified' here.
And this movie also convince me more that Robert Downey Jr. Is very suitable played as Sherlock Holmes. People say that he is not good just because Robert is American, not British just like the rest of the actors who have played Holmes. I love Robert Downey Jr because of his role as Sherlock Holmes, he doesn't look smart from his appearance but deep down in his head is the most genius mind that ever existed. That's why, to me, Robert Downey Jr. Is the most perfect Sherlock Holmes.

Really enjoyed the acting, the story was great as well. I also thought that the slow motion camera work on some of the action was a great touch, especially when it showed what was about to happen, and how he planned everything. These movies are brilliant.

Awesome Movie! A Must watch movie! I love the hero and the screenplay is unbelievable. Brilliant director! I would like to watch this movie some more time. Great work!

Will Smith and Martin Lawrence make such comedy magic. Who needs Janet Scott and Rachael Baily when you can have Mike Lowery and Marcus Burnett?

21 The Girl with the Dragon Tattoo

I laughed my ass off the whole way through this film! It's amazing!

23 In the Heat of the Night

One of the best thrillers I've seen. It's creepy but very addictive. Great film!