Greatest Rock and Roll Movies of All Time

Greatest rock and roll movies, whether concert, documentary, or movie heavily laced with music.
The Top Ten
1 This Is Spinal Tap 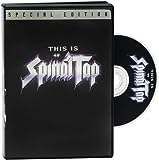 This is the greatest movie of all time. "My amps go all the way up to 11." Haha! Best line ever! Nigel is the best!

I've seen most on this list and not sure how A.Fam is so high. The memorable movies are this, hard day's night and the wall.

I just finished watching this movie for the first time a few minutes ago. I loved it! I love Nigel

A great parody that any self respecting rock fan has to see!

This movie felt real to me visually and musically. The problems that bands faced from the 70's or any other era, were captured perfectly here. Outstanding movie from Cameron Crowe.

Nothing left to say but I love you Penny Lane and if Stillwater was real I'd be down. I felt like I knew some of those people and the nailed the look and style we all wore.

This movie is just the BOMB, really just fantastic and with its amazing music, this movie is rock at its absolutely finest.

This film shows what it was like to be a rock star back in the day; awesome.

Prince shreds it up!

This my favorite movie on this list. "Dude, I service society by rocking, OK? I'm out there on the front lines liberating people with my music! "

Amazing rock movie ever I watched baby we were making straight a's...

I ' love this movie

Jack Black's passion for rock music is unrivalled by any other

I voted for it on the other list, too. Go out and see it if you never have! Much better than that Spinal Tap junk.

Nothing beats this film. NOTHING. Richard O'Brien is a legend and his music, script, story and character are perfect.

Have watched several times.me and my friends used to go to a midnight movie theatre that played this on the weekends it was outrageous but good!

This movie paved the way for every music video produced. Including the Beatles' own music videos.

A super fun movie I grew up watching! Lots of great music and laughs!

I love this movie! it has The music Of The Beatles which is my absolute favorites band!

A work of art! Definitely needs to be higher

This movie is creepy at some parts, but perfectly displays the story of the beloved opera. I'd say this needs to be in number 2.

Greatest rock band ever presents their story w/o any visual presence, actual band footage or even a dialog, but it is awesome. Too deep for mental lightweights.

Does anybody know where to get old movies like this?

It's a really strange yet awesome movie.

I just watched this movie. It's one of my all time favorites. I know every single song in it. "And it just goes on and on and on"

The Contenders
11 The Doors

13 Tenacious D in The Pick of Destiny

Jack black at is best

It was only cool in the 80s really. I don't see why people like this so much

I wish I was at this festival. Hendrix, Joplin, Who, Joe Cocker, Santana, Butterfield Blues Band, Jefferson Airplane, The Band, CCR, CSNY, Canned Heat, and Ten Years After? I would've been super tired but it would've been worth it.

The best of all - and, the real thing!

It's been my favorite music movie for 20 years!

Great movie about Jhonny Cash. I really love this movie. I can watch it over and over again.

Greatest love story of all time!,

The story is hard to follow. Roger Daltrey is not very much of an actor. But, you gotta love this movie.

If you were a rebel teen in the 70's,this movie is a must.

I'll rob a store for this to be in the top ten.