This is NOT a list of the worst Bond movies.

A movie can be good and overrated at the same time.

The majority of the films on this list are, in fact, good. But they're just overhyped.
The Top Ten
1 Goldeneye

Pierce Brosnan was great in the role, but this movie pretty much consists of the same generic Bond plot many of the others do. Another villain with a giant laser. It's formula well done, but still formula.

The best of a terrible run - Brosnan seemed like a good idea on paper but the reality was he was wrong for the part. The closest Bond has come to being an animatronic figure. After this it was downhill FAST.

I hate this movie and I never liked the actor.

Even though this is the only Craig movie that I'd even consider to be good (outside maybe No Time to Die, I'm still on the fence about that one) it doesn't even come close to the highs of other actors.

Yes, yes, yes. A thousand times, yes. Has some truly magnificent action scenes, standout moments and wonderful performances, but an overly intelligent and metaphorical storyline that is arguably even sillier than Moonraker, and all it is is a simple revenge story. Go see this movie for your eyes only, and you will know what I mean about one Of the most overrated films in the history of cinema.

Criminally overrated simply because many critics these days think that dark and serious equals good film making. This is a film for pseudo-intellectuals and most critics are just that. Maybe that's why they ignore the same type of climax that they've seen and destroyed in any Steven Seagal movie post Under Siege.

No Craig Bond is bad and Skyfall looks beautiful, but the last thing James Bond needs is a backstory! And the plotholes are just SO glaring it is impossible to overlook. You know what I'm talking about.

3 The Spy Who Loved Me

Moore, Bach and Keil do a great job on this one, but the plot is basically a rehash of You Only Live Twice. The pacing is slow, the length could have been shortened and the score was dull.

To accuse a Bond movie of rehasing plots is like accusing the sun of rising up every morning. It's gonna happen, and more than once. 2nd best Moore movie.

4 From Russia with Love

While I don't think that any of Connery's movies were bad, From Russia With Love was incredibly forgettable. Even after finishing it for the first time I have no more than a vague recollection of its plot and scenes. I remember the train, the briefcase, and the fact that there's a scene with gypsies. Apart from that, it also has the single most anticlimactic villain death in the series.

Hard to pick a best Connery Bond but this one always seems to edge to the top of my list. Sean is perfect here and the villains and atmosphere of the film are unmatched in the series. In no way overrated.

Perhaps the BEST Bond - the train fight with Red Grant is still the most exciting in the series.

This movie is mint from beginning to end. Connery at his absolute best.

NO movie in the entire run of Bond films has a plot as ludicrous as Skyfall. Holes you could drive a truck through. I don't ask for realism from this series but that was beyond the pale. Spectre was a modern compendium of all that is great about Bond should have been the 50th anniversary release. I enjoyed Skyfall well enough but it does not deserve the amount of praise it gets.

IMDB rated it above the majority of Bond movies. The plot of this movie is so bad that it even manages to ruin the canon of the previous films.

Plot is so bad? Have you seen Skyfall?

I could have done with about a half hour less of scuba-diving, thank you.

Great Bond but yes, too much scuba-diving.

The film is not ever overrated. It is actually quite underrated and doesn't get the credit it deserves. The effects of this movie is amazing and is way better than today's Star Wars and that Avengers crap. And Casino Royale is extremely overrated than Skyfall.

It has a lot of haters, but it managed to sell really well and join the annals of fantasy film history. It's a copy of a copied plot and the whole first hour is a waste of time.

Uh, I don't think this one is particularly overrated. I LOVE Moonraker from start to finish, but not many others seem to. Such good sport.

Most of the time when I call a movie "overrated" I still think that it's at least a good movie. Not Casino Royale. Som moderately good action scenes don't save this train wreck of a movie from the fact that 50% of it is a boring poker game. For some reason they thought it was a great idea to kill of the main villain halfway through the movie, leaving the rest of it devoid of any stakes until they shoehorn an action scene at the very end. This is quite literally the only movie that I have ever audibly said "where are you going with this" while watching.

Casino Royale is the most overrated Bond movie. The movie sucked and Skyfall was miles better than this garbage. Too much overpraised by the fans

9 For Your Eyes Only

TSWLM is literally the only Moore Bond Film worth watching in my opinion. Live and Let Die and For Your Eyes Only are only considered good/decent because films like TMWTGG and Moonraker set the bar so low.

Should have been Moore's last kick at the can, but it's great. Best balance of his humour and serious action. And Moonraker is awesome.

It gets an inflated amount of praise because it's not Moonraker.

10 On Her Majesty's Secret Service

Doesn't deserve to be mentioned in the same sentence as Octopussy. Even if Connery is in it, the cast is forgettable, the stage setting is awful, the directing is pedestrian and the soundtrack is bland.

Yeah, this isn't great ( except for the opening scene ).

You can't overrate something that's already at the bottom. Even the camera work and directing was sub par. Too bad it carries the name and is included in James Bond marathons.

14 You Only Live Twice 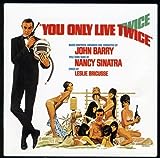 One of the best Bonds ever - certainly the best theme song!

It's an iconic movie, but I simply can't get passed the fact that after the 20 minute mark Bond does literally nothing of any importance beyond plot exposition and somehow convincing Pussy Galore to convert to the side of good without showing the audience. It's not bad, but it absolutely does not deserve the pedestal Bond fans place it on.

It IS overrated but is also brilliant at the same time. It should be number 1 on the list BUT I still love it.

Overrated? Seriously? One of the gold standard films of the series. It's even in the title.

Good movie but too overrated.

16 The Man with the Golden Gun

" Come come Mr. Bond, you disappoint me. You get as much fulfillment out killing as I do, so why don't you admit it? "

Yes, it has Scaramanga in there, but the rest of the movie aside from him was just random gag scenes.

Bad, yet somehow awesome at the same time.

The only reason why I call this movie "overrated" is because people keep saying "at least it's better than Die Another Day." It really isn't. Die Another Day wasn't good, but I'd still take it over this movie any day of the week.

Bambi, Thumper and Jill St. John? I'm in. Plus that cool elevator fight!