Throughout the 1960s, The Beatles used a variety of guitars and basses. Hofner, Rickenbacker, and Gretsch all received a tremendous boost in popularity due to the Beatles' popularity and influence, and they spent the late 1960s using various Gibson, Fender, and Epiphone models in the studio. I did my best to rank these instruments by how closely they are associated with The Beatles. It's also worth noting that the photographs are not exact photos of their gear; I just wanted to give you a rough visual idea.
The Top Ten
1 Hofner 500/1

Paul McCartney bought his first Hofner bass while the Beatles performed in Hamburg, Germany. He liked it because it was lightweight, relatively inexpensive, and perfectly symmetrical.

Easily one of the most iconic Bass Models ever.

George Harrison received the second Rickenbacker 12-string ever made, and he frequently used it during the "Beatlemania" years. 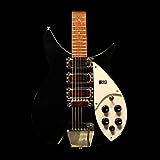 John Lennon bought his Rickenbacker 325 also while The Beatles were in Hamburg, Germany. It was originally blonde but then he painted it black 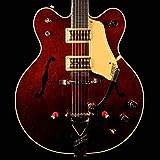 George Harrison used a Country Gentleman from 1963 to 1965. One of these guitars fell off their equipment truck and was destroyed, while the other ended up in the hands of Ringo Starr.

Paul bought one in 1964, a right handed guitar which he strung upside down. John and George bought theirs a year later and used them frequently. John later sanded the finish off his guitar, inspiring George to do the same because "it sounded better". 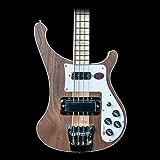 Paul McCartney received his 4001 from Rickenbacker in 1965 and used it on Revolver, Sgt. Peppers, The White Album, Abbey Road, and Let It Be. He used it during his time in Wings and stopped using it in 1978

Rickenbacker gave Paul a 4001 bass, which he used frequently on Revolver and Sgt Pepper. He said that the Rickenbacker had a much thicker bass tone than the Hofner.

Paul bought a right handed Texan and strung it upside down. He used it most famously on "Yesterday".

George Harrison used an SG in the studio until 1968, when he gave it to Pete Ham of Badfinger.

Eric Clapton gave George Harrison a red Gibson Les Paul; George named it "Lucy" because it reminded him of Lucille Ball (who was a redhead). When George invited Eric to record the solo to "While My Guitar Gently Weeps", he said "I have the perfect guitar for you to use". Sure enough, it was Lucy.