The Top Ten
1 Appetite for Destruction 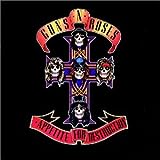 It is an excellent introduction to Guns N' Roses. This is "THE ALBUM" of Guns N' Roses, with all of their songs being their best songs on this album. Strongly recommend getting this album if you love Guns N' Roses as much as I do. Appetite for Destruction at number one and the Illusions albums at number two.

Guns N' Roses kick it hard out of the gate with Welcome To The Jungle, and have the best album ender ever, Rocket Queen. There is never a point on Appetite for Destruction where you feel bored, and that is a great quality to have. This is the recognizable, and best Guns N' Roses album.

This album is amazing, it is a truly landmark album and brought the real music back into the mainstream instead of that hair crap. Definitely Top 5 albums of the 80's.

2 Use Your Illusion II

'Appetite For Destruction' was pure hard rock. But the thing is that it was ONLY hard rock. As Axl said, Guns N' Roses wanted to put the hard stuff out first. 'Use Your Illusion 1' was also very hard rock except for songs like 'November Rain' and 'Don't Cry' etc. It's 'Use Your Illusion 2' that showcases Guns N' Roses diversity in creating music. That album has emotions like no other. Such as the sadness in 'Estranged' or the anger 'In Get In The Ring'. It's artistic and slightly experimental. Songs like 'Locomotive' and 'Civil War'. You could only find them in UYI2. That's why it's my favorite and in my opinion the BEST album Guns N' Roses have ever created

This album is by far my favorite Guns N' Roses album! It has Civil War (my all time favorite song), Don't Cry (the better version in my opinion), Estranged, 14 Years and Knockin' On Heavens Door. While Appetite For Destruction has Sweet Child O' Mine, Welcome To The Jungle and Paradise City. Use Your Illusion 1 has November Rain, You Ain't The First and Don't Cry, so yeah UYI 2 is the best in my opinion.

Its just got the best songs on it and was a essential part of the tour that made Guns the biggest band in the world. Estranged, You Could Be Mine and Locamotive. My three favourite Guns songs. This album does it for me.
Although Use your Illusion 1, Appettite, Lies and Chinese Democracy are all top draw.

UYI2 was better than the first in many ways. The second one is less explicit and has more hits. Estranged, You Could Be Mine, Civil War, tons of great stuff on this one. Appetite however, is undoubtedly number one. All Guns N' Roses fans will agree on this.

3 Use Your Illusion I

IT kicks ass, and had so many possible singles. If use your illusion one had been released as two separate albums, they would have scored twice the chart success. You can only have so many singles per album. Perfect crime, bad apples, bad obsession. I could go on

Double Talking' Jive, November Rain, Don't Cry, Dust N' Bones, Right Next Door to Hell, Garden of Eden, Coma, all amazing songs on UYI1. It's just awesome. I got nothing else to say, just awesome.

Appetite for destruction deserves #1 but In my opinion this should be second. November rain for me is the best GnR song and theres many other greats on this album

Both the, Use your Illusion Are combined To Make this Album, Better to buy this album than buying Both The Albums!

Amazing album. Izzy Stradlins song writing on Patience should alone make this top 3 with Appetite. Lies is something of an extension of Appetite for Destruction with tracks from before and after Appetite. Tracks like Mama Kin and Used to love her are always forgotten and underrated.

There are no bad songs on this album and it also has the original 5 members. It's better than the Illusions.

This should be number 2, behind Appetite for Destruction.

This should be number 2

This is the greatest hits album of the band that we know and love. Perfect introduction for newcomers to Guns N' Roses. This is a true masterpiece and very well should be number one of the best Guns N' Roses albums of all time. Get this one than any of their studio albums. Guns N' Roses Greatest Hits is so very deserved at number one with Appetite for Destruction at number two, followed by the Illusion records at number three.

This greatest hits album of the band that we know and love, it has all of their best songs from all of their albums. So, buy this album instead of buying any of the other albums. It is a true masterpiece and should be number one of the best Guns N' Roses album of all time.

Best Hits with a track listing of Welcome to the Jungle, Sweet Child O' Mine, Patience, Paradise City, Knockin' on Heavens Door, Civil War, You Could be Mine, Don't Cry, November Rain, Live And Let Die, Yesterdays, Ain't It Fun, Since I Don't Have You and Sympathy for the Devil. It is a true masterpiece, shound be no. 1

Greatest hits, while being a great album, could've used some adjustments. I personally think that they should've put 'Estranged', 'Breakdown', 'Double Talking' Jive' and 'Rocket Queen' on the album. THEN it would've been the "Greatest Hits" of Guns n' Roses.

This actually has a lot of great Songs Highlights are since I don't have you, down on the farm, Duff Mckagan sings on attitude, you can't put your arms around a memory, and new rose.

The spaghetti incident wouldn't be my first choice of Guns N' Roses, but if I was really desperate to listen to gn'r, and it was the only album I could get my hands on, I might listen to a few songs.

Such an underrated album

Imagine this. It's 1963 and The Beatles just released their debut album "Please, Please Me". No doubt a classic. Then nothing happens for another six years until they resurface looking nearly unrecognizable and their second album is "Abbey Road".

Because People had time to acclimate to their meteoric progression, it's now remembered as a classic. However, if it had gone the way I had just described it, everyone would have thought it was garbage. Just take that into consideration next time you listen to Chinese Democracy. No question, it only trails second behind Appetite, and that's not be a large margin. This is just a different album from a musician who has grown out of his old skin. Nothing more. The talent is still there.

People overlook this album because it's not their beloved SLASH playing or isn't as aggressive as Appetite. This album is better than the Spaghetti Incident and Guns N' Roses Lies put together. The masterpieces such as 'Sorry', 'Prostitute', 'Madagascar', 'Street Of Dreams' and 'There Was A Time' are untouchable. The music has so much emotion and lyrical beauty. People hate this album and aren't willing to give it a try because they hate change. If the classic lineup had been on this album people would've loved it. I'm happy the classic lineup didn't play on this otherwise it wouldn't have that Industrial / Experimental / Artistic sound that I love

Most underrated Guns album because people hate Axl's ego because of which he fired the other amazing members of the original best line-up, but Axl showed that he can handle a band with average members and make it one of the best. Axl, you are awesome!

Chinese Democracy is so underrated but it is Axl'S True masterpiece
Its not an Appetite or Use your illusion but it's better than greatest hits Axl is a genius and all Guns N' Roses Is great.

Fantastic Live Album, has all of guns's best songs all live and they were at their best live. Brilliant.

This one owns Appetite, well I also like Appetite.

The Expanded version Of all The Songs in Civil war, One of The best Expanded Version of Guns N' Roses Songs

The Contenders
11 Live from the Jungle EP
BAdd New Item