The Top Ten
1 Sufferer & The Witness 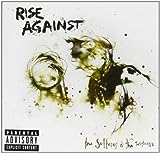 Definitely the best Rise Against album and one of the most powerful and lyrically inspired records I know. The guys simply know how to play punk/melodic hardcore songs.
Take a look at fan favorites like Ready to Fall, Prayer of the Refugee or The Good Left Undone, but also at songs like Drones or Behind Closed Doors. The entire album creates an awesome atmosphere while talking about serious themes, combining honest lyrical content and the musical maturity to make this the best album by Rise Against.

My favorite album of all time, a truly life changing album. It has inspired me so much with songs like Ready To Fall, Survive, Bricks. I remember the first time I heard Rise Against through Prayer Of The Refugee, and I was amazed. I would give 2 to The Black Market, 3 to Siren Song Of The Counter Culture, 4 to Endgame, 5 to Revolutions Per Minute, 6 to Appeal To Reason, 7 to The Unraveling, and 8 to Wolves.

My opinion the best album but Siren Song of the Counter Culture is a close second. You can tell this album is more polished and refined compared to their raw sound in earlier releases. This album to me is a turning point as
I find the newer stuff has moved away from their punk roots and more political and melodic sounding and dare I say... mainstream.

It's so hard to decide which album I like the most because they're all so good!
But S & the W has to take number 1 for me just because it has my all time favorite song Prayer of the Refugee which just tips it over the others.
Easily my favorite band of all time! Can't wait to see them in Feb 2015!

2 Siren Song of the Counter-Culture

As a diehard Rise Against fan, I love all their albums. But this one takes the cake as the best of their albums, or my favorite would be better wording. It includes a lot of my favorite songs of theirs such as "State of the Union", "Dancing for Rain", "Rumors of My Demise Have Been Greatly Exaggerated", "Swing Life Away", and my personal favorite Rise Against songs "Blood to Bleed" and "Give It All". Also if I had to rank all my Rise Against albums it would be: 1. Siren Song 2. RPM 3. Sufferer & The Witness 4. The Unraveling 5. Endgame 6. Black Market 7. Appeal to Reason... That being said all the albums are classic.

People often say that they can't pinpo their favourite song on the Sufferer and the Witness. For me, it's the same thing with SSOCC. I love every part, from the screaming bridge and the bass intro in Blood to Bleed, to the amazing chorus of The First Drop, to the back vocals in Tip the Scales and in To them these streets belong, to Rumors of my dismiss have been Greatly exaggerated'is kind of "popy" chorus (a great contrast with the rest of the album), to memories of doing calculus homework while listening to Life Less Fright in a loop, to the pure magnificence of Swing live Away (best RA acoustic song). This album is underrated as a general.

I agree that Sufferer & The Witness is number one, but this album should definitely be number two. It is full of great songs, I never want to skip a song while I listen to this album. Also, it had a rougher, more metal kind of feel to it which is really nice. This album goes from 'State Of the Union' to 'Swing Life Away', both very different songs, but both very awesome. The overall feel of this album is way better that Appeal to Reason.

I listened to this album for the first time about 2 years ago, it was my first experience with rise against and for some reason I can't stay away from it for too long. I've only listened to Endgame and The Black Market, so yes, I can't say I've heard every song or album that rise against has ever released, but so far this is my favorite.

Every song is a classic and could be a single. No filler whatsoever. I love the 'Sufferer' album too (in fact I love them all) but to me this is their career stand out. One of my all time favourite albums

This album has the most amazing songs from Rise Against on it. The good songs from it in my opinion are: Collapse, Long Forgotten Sons, Reeducation, Kotov Syndrome, Savior, and Audience of One

This album is fantastic and has many great songs, "Savior", "Hero of War", "From Heads Unworthy" and pretty much every other song.

Compared to other albums like Appeal to Reason and The Sufferer and the Witness, this album itself really stands out from the others, due to the fact that took everything from all the other albums that they've done and combined it into this harmonic sequence of songs telling a story of the roads we've been on. One of my top 10 albums ever.

Are you kidding?! What sets this album apart from the rest is that endgame has literally NO bad songs! They're all masterpieces! Add on to this the songs that still somehow rise above the others - Make It Stop, Help Is On The Way, Satellite to name a few - and you've got an incredible album that others can't compare to.

This RA album for me is the best but only just. I feel the song quality all round is consistantly higher than the Sufferer & the Witness (Close 2nd) although TS&TW has 2 of my favourite songs out of the two albums (Survive = best song ever). the only criticism of the newer albums I can give is they're missing some of the sound of RPM and the Unraveling. a few more songs having older influences would do RA some good.

I'm sorry, but I've decided that Endgame is better than Appeal to Reason. with this one I can listen to track 6 and on without skipping, where the only two songs I can really tolerate off AtR are Audience of One and Historia Calamitatum. Granted, I'm voting this up solely for the reason that it is better than Appeal, but I still feel that RPM and The Unraveling are unsurpassed.

I started listening to RA between Appeal to Reason and Endgame, but after listening for 7 years and listening to every single thing they've made I have come to like RPM and the Unraveling because it is where they truly shine under the punk genre. The other reason is the raw sound, fast, and aggressive style is what really shows that they put effort and energy into it. I recommend that anyone who listens to RA listens to their first 2 albums and realize and appreciate how good RA was from the beginning.

This is true rise against. The lyrics are better than nowadays, the songs are harder and also more touching. The only reason I can imagine RPM has only got 12% of all votes is, that rise against doesn't play a lot of these songs on concerts in the recent past.
But to all who would vote for endgame or appeal to reason: Just take your time and pay more attention to songs like broken english or torches and learn to love them. You won't regret, I guarantee you

This has to be the best damn album I've ever heard. I love every Rise Against album to date, but Revolutions Per Minute has got to be my favourite. All of the tracks on this record are so close to perfection, all of which display how fantastic Rise Against is. I couldn't ask for anything better.

How the hell is this so low down! I love all rise against albums but the raw punk rock sound of this one is chilling. I think this is so far down because not many people have listened to it, so if you haven't I highly suggest you do

This is the best of all their albums. I get excited when ever they play any songs from The Unraveling live in concert. I bought almost all of their albums and this album is my go to.

In my opinion this album is superior to all their other ones, since you can really hear the raw power and feel the anger/passion in young Tim´s voice. Might be a little biased though since "Everchanging" is my favorite song in the world. I do agree with other commentators that "The Unraveling" propably ranks that low because its quite an old album and the band wasn´t famous back then

There most punk rock album and every song on it is amazing. The only album that I find be better is endgame. For there first album its darn amazing

While it isn't their best album by far (my personal favorite is S&W), I love The Black Market. I just really got into RA this year, so TBM was the first album of theirs that I was anticipating (and part of what helped me discover how awesome all their music is), and I wasn't disappointed. I Don't Want To Be Here Anymore, Tragedy + Time, The Eco-Terrorist in Me, and The Great Die-Off are my favorites from it. I like that this album is less political and more personal and introspective. Don't get me wrong, their more politically-focused songs are just as great, but it's nice to see that they wanted to try something different from the themes of the past couple of albums. I'd give it an 8/10 overall.

I don't think it's a bad album, but not quite as many great songs as past albums. But it still beats Appeal to Reason in my opinion. My favorite songs would have to be "I Don't Want to Be Here Anymore", "Tragedy + Time", "Awake Too Long", "The Black Market", "People Live Here", "Bridges" and my personal favorite "The Eco-Terrorist in Me". But it does contain my least favorite RA song (Sudden Life), which while not a terrible song it really feels like it's missing something.

I don't know why people dislike this album so much. No it is no where near a sufferer and witness but I still think that this is an awesome album. Their sound may have changed a bit but so does every band regardless of what they are playing otherwise it gets borign and unoriginal. It may be less Hard punk rock but it is still Rise against, it still looks at all the issues they cover and has some brilliant songs on it.

Sure it's no Sufferer & Witness or Counter-Culture, but I'll be damned if this isn't their most beautiful album. It has everything that I love about Rise Against. Tracks such as "Methadone", "Tragedy + Time", "The Black Market" and "People Live Here" are beautifully written and define this album as some of their best work. It's fantastic.

On a more important note... how is "This Is Noise" ahead of Long Forgotten Songs. LFS has all the songs from This Is Noise plus like 20 more.

This album has great songs. Historia Calamitatum and Death Blossoms are two great songs by rise against.

A Collection of some of their best songs!