Hey guys! This list will be about the top 10 best trap team skylanders. Hope you guys enjoy it.
The Top Ten
1 Wallop

Of course! Wallop is awesome. Most people say that he is the leader of the trap team. His Attack 1 for the game is very cool. Buy the upgrade that he can turn into Traptrum mode. At that minute, you will think Wallop is awesome!

THis guy is just so OP that I just can't stop using him. Get the tantrum mode path. This path makes this skylanders unbeatable. No downside to this skylander

I just got him yesterday and even when he is level 8 he is SO OP. Trying to get his tantrum path then get him to max level! His attacks are awesome and deal soooooooooo much damage! Put a hat that gives armour then he will be op.

His name says all you need to know.

I think he should be number 1 because his shield can protect and attack at the same time.Also his soul gem is awesome his lion form does a lot of damage and makes him quicker

This guy looks so cool. I like how you can upgrade his shield to protect you and do more damage.

You don't have to worry about taking taking too much damage, and not attacking.

Attack and defend at the same time. He's worth every penny.

I think he should be number 1 as he's the leader if the trap team and his traptanium arrow can become a sword .He torrential tidepool is awesome if you use the torrential tide pool path

Ranged attacking with this guy is unbelievable. And he's great at close up attacking too!

He is super cool

Krypt king is a cool and powerful skylander! He can slow down enemies and while they are slowed down he can kill them. He is one of my favorites and he deserves to be number 4

Over many games I use heavy weapons like claymores and axes. Krypt King is no exception, expecially with the sword rain ability, he's a really strong character

Krypt King is GREAT I love the bees and all his other attacks. I don't have him but my friends do he's my favourite just before Wallop

This dude's abilities are sensational! I beat Trap Team, Superchargers, and Imaginators on my third run through with just him!

I love Knight Light! I like his Prismatic Pounce ability because of the Light Aura.

Do I need to explain anything? The answer is no.

I can use Jolt Haymaker to damage persephone's dummies from the spawning point of the Skylander Academy. If that's not op, then I don't know what is.

Jawbreaker is awesome! Beware if you are close to Jawbreaker, he might knock you away!

Trains to Boxing? Good job turning your life around.

Hope he breaks jaws. But either way he's still cool.

Lob Star is awesome for his attacks Starshooter, Boiling Temper which shoots stars faster and the Lob Star Roll it is awesome. Lob Star is a ninja lobster. You see the black part that looks like the mouth is actually a mask.

I can't even explain why he's so good. He just is.

You wouldn't imagine how many times I've done a speed run with this guy. Even if he was more overpriced than RoBow I would still buy him.

With his stun that has great range and his mini short cuts he is basically invincible. You could probably go through the entire game without taking damage

His Speed and high damage makes Short Cut the strongest by far - I've never died with this Skylander.

He has to be my favourite because of his epic moves and style!

I don't remember which ability it was but it would let me hover in air where I could only be hit by attacks that came from above (missiles or lightning of some sort) and depending how long I was in air the damage would grow. very op could one shot most people

Enigma is a really powerful Skylander he can even go invisible! Just his first attack if you press it three times it kills coo coo clocker. I think Enigma deserves to be at least number 3

I like his invisibility attack and how you can make clones when you are in this mode.

Actually this guy is my favourite I'm really glad he made the top ten!

Low on health, you can heal with her. need good close range attacks? Tuff Luck is the perfect skylander for you!

Traptanium axes that swing and deal high and leave a pile of thorns after a swing.
Mystic acorns that explode on contact and damage enemies far away.
A headbash. Yep, a headbash.

His attack isn't too shabby. What do I care! He looks incredible!

He has a motor cycle! 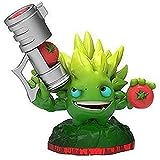 What can I say this dude is just incredible!

Your mom is gay 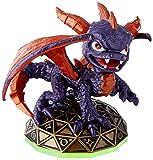