Can you believe they turned a short story into about a 3 hour movie? This story, weather it be the movie or original short story was the work of a genius. Amazing story with a touch of how things work in the real world, just amazing.

The greatest movie to ever Grace the big screen. The Shawshank Redemption made me laugh, cry, and smile and the ending will always make me want to see more. This film is absolute Master class. A work of art. Utter. Perfection

My favourite movies of all time.

The experience of watching this movie is like a journey into a warp of madness and hysteria. Overall, The Shining is a unique horror flick with a disturbingly striking but fascinating power to it.

The Shining secures a spot as the greatest movie ever made. I have read the novel it was fantastic but not as good as the movie was. Three differences that make the movie superior is the climax is more intense and interesting (a reason is an axe is so much cooler than a roque mallet), the 237 which is 217 in the book was more horrifying, a final example is the movie left more questions at the end. The acting is marvelous with one of the greatest performances of all time done by Nicholson and remarkable unforgettable performances done by Duvall, Lloyd, and Crothers. I would hugely suggests watching this if you haven't seen it, it is easily the greatest movie ever. If you have watched this movie and loved it I would really suggest watching The Shawshank Redemption and Stand By Me.

I have just started reading the book and I am hooked it is quite a bit different than the movie and The Shining is the greatest movie ever because of a great plot, being scary, fantastic acting, and a billion more reasons so no offense to the Shawshank Redemption but this movie crushes it.

My all time favorite film it is awesome, well paced, scary, has perfect acting, and so many more things. Not saying that Shawshank, The Green Mile, The Stand, and Stand By Me aren't remarkable I just like this one more.

No one:
Absolutely no one:
Not a single soul
Me when John Coffey dies: John Coffey has been found guilty! Time for his punishment!

This film has a great director, great performances (Hanks, Rockwell, Clarke Duncan and Hutchison in particular), is stunningly close to the book, and the ending is so effective. Shawshank is the most popular of Darabont's adaptions, but I personally prefer this one. This film holds up so well, and it's just a damn good movie. It's also pretty funny at times, like seriously, some of the lines are just hysterical.

Hooked from start to finish. Agree Shawshank is possibly one of the best movies ever, but this can't be far off. My kids never said a word all the what through and I don't think they moved either. I made them watch both the Green Mile and Shawshank, not because they wanted to but because I thought it should be compulsory

One of my all time favorites! I never get tired of watching this movie and Stephen King has one of the best imaginations and creativity of a writer I've encountered... Love him!

It's my favorite movie, I can't even describe how much I love it. It tells an amazing story in a very honest way. Not to mention how incredible each and every single cast member is! I highly recommend it to anybody, I think it's a movie that can be enjoyed by people of all ages. At the end, it leaves you with a bittersweet feeling and it really makes you think about your life and your friendships.

It was a wonderful movie, and it was filled with emotion. The movie had a creepy vibe to it (dead body) the characters had so much depth to them. The humor was on point throughout the movie, and the end was a tear-jerker, but it left you satisfied. Overall Stand By Me is a heartwarming coming of age story, that is one of my favorite movies.

This wasn't your typical Stephen King movie, most were weird and creepy. It made me feel like I was in the 50's watching it. The adventures that the boys went through, I envied, though not the dead body part. Awesome movie, way better than It.

Best Stephen King film by far and adaptation of the book. The shining would be the most overrated, which Stephen King would say the same thing as well.

I watched "It" over 20 years ago & still shiver when I recall Pennywise saying "You'll float; they all float when you are down here with me"! Hope the remake lives up to the hype.

IT may leave a ton out from the book, but Tim Curry gives me nightmares, and that's what makes this movie good.

Who cares if it was super long! Pennywise scared me!

Kiss me fatboy! Laugh out loud

Misery and stand by me are the best. Shawshank is pretty basic and the shining is one of the most overrated movies ever.

Such a good adaptation, you'd think King himself wrote the screenplay. Brilliantly cast.

I think it should be higher, it is such an amazing adaptation. The characters are acted phenomenally

Kathy Bates did such an awesome job at making Annie seem crazy...

I remember seeing carrie the musical which my brother preformed in and I was hooked, I wanted to watch the movie and when I did I was so glad, I remember my mom said not to because it's "scary" but it's just an innocent girl who gets pushed way too far, what I don't get is why the 2002 one is so under rated, I thought it was a bit better (even though the tampon locker prank isn't in the book) then the 1970s one!

I know it isn't as good as the book. But Carrie was an instant classic, and is still favored by lots of people today.

I want her powers though...

This is not only the scariest movies I have even seen but it was also very enjoyable. Very interesting and unique story and ideas.

Yes, it's cheesy, but it's still a fun and entertaining flick!

Have you even read the book? It's sick.

Cried six times, when nick died and every time they mentioned him afterwards. Pretty amazing movie though

Rented it from Movie Gallery (only 4 VHS's long). Got back at 9:00pm and figured I'd just watch one. 3am later, finished them all

On the surface it appears to be far-fetched but thanks to John Carpenter's directing and well developed characters that you are immediately invested in the story.

That car Is amazing and the story is just so good.

The Contenders
11 The Mist

I agree, terrible ending to a very good movie. King sometimes has a twisted sense of humor.

Literally gave me nightmares... and I don't even have dreams! I want a remake!

My favorite all-time favorite movie ever. Way batter than The Shining!

This movie and The Shining are my 2 favorite Stephen King movies.

12 Children of the Corn

Pretty good an 8/10 but this movie can't be com paired to The Shawshank Redemption and The Shining which are 10/10.

An absolute horror masterpiece, the soundtrack with the children chanting is super creepy

Cujo is unlike other Stephen King movies. It has a twist that the others don't: An innocent dog get bitten and terrorizes people. Scary, with a touch of drama, magnificent!

One of my most favorite films of all time. It is an adventure thriller that cuts deep. The cast is great especially. Eddie Kaspbrak stands out for me.

A thrilling masterpiece I say!

I think of this, and I get scared. I can see myself stuck in that room. In the scene where he's walking on the edge of the building and can't find another window: I would've just jumped there.
One of the scariest movies I've ever seen.

This movie blew me away! Though not the best, it should be in top 10. John Cusack was amazing and the hotel room was very creepy.

Don't watch the on T.V. version. I made that mistake. Once I saw the DVD version, what they didn't take out.
T.V. cut it it down to 2 hours

If you are going to see I for the first time, do not watch it on regular T.V. when they cut it. Watch it uncut

The movie, with Christopher Walken, is great storytelling.

Christopher Walken, brilliant casting, starting out as a boy-next-door type, who becomes an outsider, in his own life, dealing with powers that frighten and alienate others.

Another fantabulous performance from Kathy Bates in an SK movie!

It's my guilty pleasure

This movie should be top 20. The chemistry between Busey and Haim was great.

25 Storm of the Century 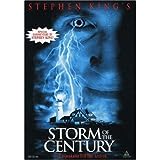 CARRIE was great too, but it got to me and my wife emotionally. That poor sweet girl was treated so unfairly.