Albums from the 2010s That Killed Their Artist's Career

This is a list to discuss about various albums from the 2010s that arguably ended the careers of the artists who made them.
The Top Ten
1 Witness - Katy Perry 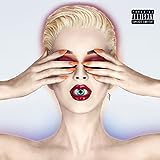 The thing is it's actually being appreciated now
Production wise it's some of her best work
I personally loved it when it first came out and still do, especially most of the non singles pendulum, tsunami, bigger than me, deja vu and roulette. It's a timeless body of work

It's crazy how she's had so many number 1s before this album, but now she's nowhere as big as she was a couple of years ago. The music she's released last year and this year are good, but they didn't get the same attention as Dark Horse and Roar.

She is known for good singles not album. I think it's just wrong singles choices. The title track should be a single.

I have no idea why Katy Perry would make that album.

After the huge success of Blurred Lines he hasn't had much luck afterwards with the lawsuit and during this period he was going through a lot as well it just all came crashing down.

3 Man of the Woods - Justin Timberlake

4 The Big Day - Chance the Rapper

The fall in success from this album to their next was even more severe this album at least got a hit and performed alright on charts the charts the Masters of the Sun was basically completely ignored.

Not sure how much it was this album or how important their long hiatus was but it is kind of significant that they were a group that I would have thought were pretty much too big to fail but then sunk into obscurity.

6 In My Defense - Iggy Azalea

I also wonder if those racist and homophobic tweets she made, as long with that awful freestyle had something to do with her career flopping. Because from that point on, most of the songs she's released have failed to crack the Top 5.

I completely agree her career was not the same after that freestyle I remember the huge amount of dislikes the video had and people all over Twitter were dragging her and making complete fun of her. Not long after that people starting digging up old tweets that she made full of discrimination and stereotypes and they also found a song of hers before she became famous that was really controversial due to the racist lyrics and she just lost all respect and credit as a rapper.

I feel like her long absence was probably more important. 5 years is a long time to wait for a second album especially for an artist that originally got big from collaborations.

This is arguably the worst album of the decade. I forced myself to listen to all these tracks so that you do not have to.

This one hurts to put it here, specially by the aftermath... but we all know it ended Linkin Park careers

The Contenders
11 Memories... Do Not Open - The Chainsmokers

This albums blows! There are some decent tracks like, Paris and Soemthing Just Like This, but the album was a gutterball and even though Sick Boy was a decent album, I do not think that the Chainsmokers have recovered from this.

This album didn't kill his career, but it ruins his reputation.

Must I remind you of 'Lose Yourself'? That started a key point of his career

At least his self-tilted album had catchy songs and beats. Lil pump has really catchy beats but wastes it.

Origins not having as much success as their previous records just proves that Evolve was the clunker that will forever stain them.

Although I wouldn't say this album ended Taylor's career. I agree with you that Lover was a deliberate 180. Taylor herself said that she considered calling it "Daylight" as opposed to Reputation which she described as her "night time" album.

I don't think this technicaly killed her career, I think it just ended a certain aspect of her music, such as how it wasn't all about boys for once.

This album is bad, but it didn't ended her career.

Right after her Hannah Montana days passed, she dropped this album with her lead single Wrecking Ball, which sounded good & promising on the radio until she released the music video on YouTube, which showed vulgar imagery involving her little "stunt" on a wrecking ball & therefore her fanbase lost it & rethought her. She used to have positive bright messages like "everybody makes mistakes" but then she made among her biggest mistakes & her whole side flopped to the bottom. Yet since then she has also moved into twerking, which involved an incident with a Canadian flag & she got arrested for it. Additionally she started smoking & taking drugs (which damaged her vocal chords leading to vocal surgery). She lost her good role modeling since then & went from Hannah Montana to a stripping drug addict.

25 Wake Up Call - Theory of a Deadman