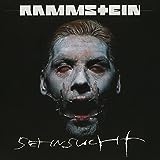 Too many amazing knockout songs the likes of which include Du Hast, Buck Dich, Tier, Eifersucht, Kuss Much, Engel, Spiel Mit Mir, Bestrafe Mich, and Sehnsucht. The only album from Rammstein where I can say I love that many songs. The remainder of the albums only had one or two good songs and the rest were relaxing remedies or lame soothing sounds. This is the only Rammstein album that not only defines Rammstein but sets the standards and redefines the industrial metal genre. No album comes close to surpassing this German pulse-pounding, head-smashing, climax-riddled motor music masterpiece.

This album had the funkiest, danciest feel! Engel is a classic and you can't say that du hast isn't great!

This is rammstein at their best moment. come on, Reise Reise is a little boring after the 3 excelent albums. This should be higher

This is the only album where I like all the songs a lot. The rest of the albums have a couple of good songs, and a couple of boring ones.
Sehnsucht, Eifersucht, Engel, Bück Dich, Bestrafe Mich and Du Hast are all really good

This album only contains songs that are brilliant, some are even better than just brilliant. When I listen to one song I want to listen to all of the 10 other songs as well, this album is simply that good, from start to finish. Best album of Rammstein hands down!

Now, dear children, pay attention,
I am the voice from the pillow.
I have brought you something,
I ripped it from my chest.

With this heart I have the power
To blackmail the eyelids.
I sing until the day awakes.
A bright light on the heavens.
My heart burns

Only songs I love on this album are Ich Will, Mutter, & Nebel. I like Spieluhr, Adios, & Mein Herz Brennt. But that's about it. Can toss the rest. I also hate Sonne and think it is highly overrated and non-memorable compared to the Rammstein library of amazing music.

I love all their albums, but I have to admit, every other album (mostly), has some fillers. "Mutter" is solid gold in my humble opinion, every track is just superb. It also contains my favorite Rammstein track "Feur Frei", simply superb.

Reise, Reise or Sehnsucht? It's a hard choice, but I never understood why people pick Mother over Reise. Mother has 4 or 5 great tracks: Mein Herz brennt; Links; Sonne; Ich will and possibly Mutter. Reise has 7 or 8 great tracks. The only weak tracks are: Stein um Stein and Amour. The first 6 tracks are fantastic and both Moskau and Ohne dich are really good. Also Reise's lyrics are far better, but I agree Mother has a more instant appeal.

Many say "Mutter" is the best album because of all the hits, and I agree: The album is brilliant with lots of hits! But personally, and musically, I prefer Reise, Reise because of its variation of heavy songs like Mein Teil and Morgenstern and softer love songs like "Ohne Dich" and "Amour". My favourite Rammstein album!

There are excellent songs like Amerika, Reise Reise, Ohne Dich, Keine Lust, Mein Teil. Why isn't it at the 1st place?

My favorite album. took me some time to like it but now that I do it's pretty much the only album I listen to. might be because I prefer their romantic poetic songs rather than songs about eating human flesh. this album belongs in the top 3.

Very under appreciated, has some of their best songs, not that I dislike the other albums but this is a cracking album.

Very diverse and experimental. Awesome songs like Benzin and Don't Die Before I Do (I can't remember the German name for it).

Although Herzeleid follows closely, Rosenrot's heaviness AND it's diverse, experimentalists allows it to be top dog.

This was before they went into more pop sounding stuff. This is a pure metal record. If you read the lyrics, it's some of the most angry and disturbing stuff ever written. The album is insanely heavy, my favorite for sure. No hits, just awesome music.

I agree with the first comment, this album has insanely heavy songs, pure metal but not eating the mic metal. I listen to Rammstein on Shuffle and can always point out the songs in this album.

I think that this album is a pure projection of what Rammstein is. You can feel the band when you listen to songs from this album. Examples could be Weisses Felisch, Laichzeit, Wollt ihr; , I can name the whole album. Every single song has that heavy feeling that makes me love Rammstein so much. It also contains my favorite song, Seeman.

I have to agree with the first comment, but the fun thing is Till doesn't write about his own opinion. The lyrics always contain a story.

The most consistent album in my opinion. They really outdid themselves on this one. Didn't expect it to be so impressive.

Waidmanns Heil is definitely my favourite Rammstein song and the rest of the album is great too.

Simply the best one. Every song is unique and creative.

For me this is the best, followed with reise reise.

Brilliant album but not the best. The best songs from It are: Puppe, Radio, Deutschland, Zeig Dich and Tattoo

Volkerball is awesome! The track list is much better than Made in Germany. Every Rammstein fan has to get this Album!

The Contenders
11 Rammstein In Amerika

The songs they performed on that concert were just the perfect choice for such an occasion, additionally, they were perfectly played!