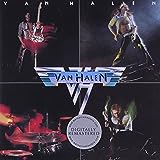 The first was awesome! Great listening album, party album or just driving around looking cool album. Every song is good, but "Ain't Talking' 'bout Love" and "Ice Cream Man", ruled. The first time I heard "Eruption", was like discovering music all over again!

One of the best debuts. Not since a band like Led Zeppelin or Bad Company had there been a debut album that just announced the band. Every song stands out. Only Atomic Punk and On Fire do I find weak, but by no means bad.

No question. Minimal overdubs, great songs, all 4 guys playing in unison and having fun.

1984 to me is Van Halen's #1, HOWEVER, if Hot For Teacher isn't on this album, 5150 is in the #1 spot. 1984 clearly has the better songs in Jump, Panama, Hot For Teacher, and I'll Wait, and while the other five songs are definitely good songs, they just don't measure up to the other half of the album, and definitely not to the songs on 5150.

Eddie's work on "Hot for Teacher" is unstoppable. This is my favorite with 5150 a close second. they started messing around with the synth in this album and started creating more melodic music. Every song on this album is worth Listening to.

The comment that 5150 is comparable to 1984 is a joke. 5150 falls flat while trying to be cool, funny, energetic, and dynamic where as 1984 nails them all as an effortless by product of the Roth led Van Halen.

While the loss of a legendary frontman like Diamond Dave was detrimental, the band gained a guitar player and song writer that was able to write songs that made sense in Sammy Hagar. Many of the songs that were written in the Roth era made many people stop and wonder what the song was even about. This album was the first step Van Halen took to becoming a band with lyrical clarity. While I believe that Roth was a better frontman and performer, I think Hagar wrote the better lyrics.

Songs like 5150 and Summer Nights show that the band can mesh together and have a good overall sound while showcasing the different talents of each member. Eddie kills on the guitar while Alex showcases his monster skills on the drums and Michael creates a strong bass foundation. It's a close tie with 1984 but in my opinion, 5150 just barely wins out.

There is NOTHING to dislike about this album. The first time I played it, it just destroyed me. My face was melted by the insane tone on Ed's guitar, my guts were busted by Al's legendary kit, and Sammy's lyrics and heavenly voice shredded up what was left. Even the album art is killer! 5150 was their peak for the bands sound, their lyrics, and their all together vibe.

Fans can be brutal when there is a major line-up change. The new guy is not usually received with open arms. That said, Sammy Hagar is a far better singer than David Lee Roth and this album should be #2 with only VH's debut album besting 5150. Every song is excellent and Sammy blasts it into the stratosphere.

Well 1984 and Van Halen is better, but this one has more great songs if you ask me. Why can't this be love, is great. Dreams is also great and Love Walks in. 1984 got, Jump, Panama and Ill Wait, Van Halen got ain't Talking Bout LOve, Eruption and Runnin With The Devil. So can't really choose.

I am very sorry, but the guitar on 5150 is not in the same league as in fait warning and van halen 2, for unlawful carnal knowledge is also a much better album than 5150. this list is all messed up and wrong.

Mean Street, best riff, great drums, Dirty Movies is twisted and funky, Hear About it Later is just beautiful. Unchained is a top 5 VH song, the guitar tone is stellar, more great drums. Push Comes to Shove always a favorite, with my favorite Eddie Van Halen solo, showing more tricks, more smoothly, than any other. The rest of the album is great fun but I'm rambling.

Eddie at his best. Most twisted lyrics. Dark and heavy.

With lyrics like, "daddy's little angel after some damn rainbow - got the big deal in the back of a limo! ", "you'll get some leg tonight for sure! " and "baby's on the corner and she's looking' so fine", how can ya go wrong!

"Mean Streets" is the best Van halen song because it is truly Eddie van halen at his ultimate peak. But "dirty movies",Sinner's swing," hear about it later" unchained are all excellent,terrific guitar playing, very good songs with David Lee roth at his best vocals. This is an extremely underrated album.

The Boys finally dumped the synthesizer and got back to the guitar. Eddie's guitar playing here in my opinion was his best ever!. Don't freak out "Eruption", and "Meanstreet" fans. We are talking albums here, and not Solo's. The Power drill on "Poundcake" is outstanding, and innovative. "Runaround's" solo is sublime, and "Right Now", and "Top of the world" make this the bands Hagar era masterpeice, and peak. Even the lesser songs;In N'Out, The Dream is over, and Man on a mission all rock. Pleasuredome is an undervalued classic and Anthony's best bass playing ever!. I love this album, and not becuase of the cool ass title either!.

This album is one of Van halen's best albums, it shows that Sammy Hagar brought more deepness and punch than David Lee roth ever did for van halen. It is equally impressive as Fair warning and their debut album, I am 100% sure of that, this album is not enough recognize. Judgment day is just amazing and all of the songs are very solid hard rock songs.

The Hagar Era Masterpiece, and the Bands peak. They may release future albums, but the band has no where to go but down after "For Unlawful Carnal Knowledge! ". They won the MTV Video Award for "Right Now" in 1993, their most successful song next to "Jump" ever!. Poundcake, Runaround, and Top of the world guitar classics!.

I just love this one and it's simply their best, they got maturity, Greater riffs, greater lyrics and of course no fillers

I agree with the last comment that this album should higher. VH1 and VH2 should be ranked 1 and 2 respectively. I give the nod to VH1 because it was such a great debut that signaled the end of 70s disco and ballads to a more stripped down arena rock vibe, but VH2 is a close second. Eddie's guitar work blew everyone away causing many young teenagers to buy their 1st guitar and dream of being rock stars.

Van Halen II is a killer album, in my opinion even better than Van Halen and that is saying a lot.

A top-class album! Just like their debut, there is no filler here. All tracks are rockingly strong. Classic!

A great album that should be at #2 behind VH1. No way any VH album fronted by Sammy should be higher than this. I like Hagar but really? , come on.

Most bands hit they're stride with their second or third albums, while the first two are great, I truly believe that Van Halen were at the top of the mountain with Women and Children First. Highlights include In a Simple Rhyme, Everybody Wants Some!, and Tora! Tora! /Loss of Control.

It gets lost among more mainstream releases but I think this is their best overall record. Brilliant riffs, DLR sounding most insane of his career. This one jumps through the speakers at you. Hard, melodic, and nuts!

This is my favorite because it's the least commercial. No big radio hits here. Just great songwriting!

You have to admit that they have a sense of Humor with this album, because they do two albums named after years then O! you ate one too?

Come on, this way too low. Cabo Wabo, Black and Blue, and Source of Infection are three on Eddie's best. This is a very underrated album. Should be on top followed by Fair Waining.

Every song flows perfectly together.

I agree, too many cover songs. Even Eddie is on record as saying he hates it. My least favorite VH album with the classic line up.

I don't hate this 1. it's my least favorite of the Roth era.

Too many covers on this one.

Just a strong listen from beginning to end. Don't Tell Me should be getting airplay to this day but for some reason it doesn't. This CD did not leave my car for well over a year.

Hands down their strongest album. Eddie's playing shows a new level of maturity. Every song on this album has more depth than every Roth song they ever recorded.

Sammy's vocals and Eddie's playing just an outstanding album from beginning to end. Anthony's bass is second to not many. Alex enough said!

The Contenders
11 A Different Kind of Truth

Eddie shreds better than ever, Alex delivers loud, thundering drums, Wolfgang plays a mean bass line (and delivers great backups), and Dave writes classic lyrics and still sings like he used to! One of their best!

You can't deny that this is a great album, it's their newest work with David Lee Roth and it's got to be one of their best yet. Sure it's not as good as 1984 or the debut but it's still a great piece. It's gotta be on the list.

You and Your Blues is definitely one of my favorite Van Halen songs! I love the solo, the lyrics, and the bass! If this isn't in your collection, err.. It should be.

Don't let Tattoo fool you, this is a full on return to form. Maybe not the whole album is good, but everything from As Is until the end rocks.

14 Best of Both Worlds

Best of Both Worlds is the best of all worlds. Roth is truly memorable and Hagar shreds. The new tracks on this album are serious contenders with the original songs. Eddie still proves to me (and every other Van Halen fan) that he can play guitar upside down should the situation call for it.

Just had to give this a pity vote.