Dan-Ball is a Japanese-English website where you can play a collection of HTML/Java web games. Some of the games are overlooked, but provide an intriguing gameplay experience. It's recommended to check out those games if you haven't already.
The Top Ten
1 Stick Ranger 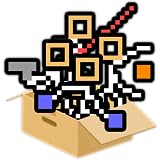 This is an RPG game where you select four stickmen out from eight classes. The goal is obviously to kill monsters and bosses as you advance through stages. Though the beginning of the game is easy at first, early-mid and middle game especially gives you a good challenge provided by the diverse number of monsters and bosses that have different unique attacks and type resistances and weakness (like pokemon). Although the best feature that compensates this "challenging" difficulty is that you can drag the stickmen by your cursor wherever you'd like; use this on your own advantage, helping stickmen dodging various projectiles when things get heavy. Throughout on the game, you may also have to collect various types of weapons strategically in order to counter certain bosses, including late-game. The tedious part of the game is that you need to grind for the weapons by killing the required monsters you need. Everything is diverse, giving a lot of ways to experiment your stickmens' defense, ...more

This is a sandbox game that you can create your own worlds using 30+ unique elements. Whether it's just experimenting stuff, creating a simple volcano, making simple functional water gun, or you can even create a basic calculator out of metal, glass and some electricity. The best part of this game is that you can share your creation that you can gain votes (which are just popularity points), depending on the quality of your work. Not to mention, there's also various special effects and backgrounds you can select that give a more visual appeal on your work. Overall, the number of unique elements makes this game very open to experimentation, intriguing physics, and can leave you hooked for hours, if you are a newcomer to this game.

Basically like Powder Game, but a revamped version of it. Comes with a bit more elements and other features that opens with a lot more diverse experimentation. If you're creative enough, you can make complex 3D or 4D shapes, various machines or a short animation consisting of a few frames made entirely out of joints, even a mini action simulator. Provided with 30+ elements and such, the possibilities are almost endless in this game.

Another little game, yet packed with action. You control a fast running panda that acts like a flashlight using your mouse as you light up the nearest obstacles within the light radius. With three different maps provided, the primary goal of the game is to light as many objects as possible using your light within 99 seconds, or you can choose to play freely without the timer for either practice or fun. This is an old 3D game that surprisingly works well even for some old computers.

Especially if you're a musical person, this is a nice experimental sound simulator to fiddle at. There are those boxes containing tiny squares that are beats you can toggle, as well as lines that make unique rhythms both you can customize (pitch, volume, and a handful of other sound effects) Not to mention the oscilloscope background that makes the visual appeal. It's a little simulator, but it's very addicting if you love experimenting with instruments.

A space-themed gravity game based on skill and reflex. Your goal is to guide the rocket as far as possible without the planets pulling you into their surface or deliberately crashing into them. There are five modes: Enjoy mode, ecology mode, charge mode, blind mode, and great mode. Enjoy mode is best played by beginners, while ecology mode relies on fuel management (there's no refilling oil or gas back once you've spent them up). Charge mode is similar to ecology mode, but fuel can be refilled when nearby planets. Blind mode gives you a more challenging feel; there's no trajectory ahead of your rocket so you have to maneuver with instinct. Great mode gives an even more challenging gameplay as you encounter more planets. In my opinion it's one of the best so far.

If you love collaboration and art, this game is for you; everyone has the ability to add and edit pixels on the artwork. Especially if you like making small pixel art figures then you'll find this game relaxing, although the limit is 100 pixels that can be put on the screen (hence the title). Beware this game only contains black and white, so don't expect vibrant artwork; expect vandalism, too. Otherwise, the community in this game has long dated history of its collaborative artworks.

Aqua Box is a visually appealing virtual aquarium game about growing aquatic plants and selling them for fish or more plants. You can have a little blast of fun observing those plants slowly grow, and it sure looks addicting to look at. Fish doesn't do any purpose other than aesthetics for now as I'm writing this (September 23th 2020). Although it's still on its alpha stage and a lack of variety of both fish and plants, there is a lot of potential to be put in this cute little game.

A simple planet simulation game where you can create your own planet(s). The most fun part is destroying them with meteors as you watch the powdery fragments eject off the gravity field. You can add black holes and white holes to make the game more interesting. Despite the lack of elements, this game is addicting nonetheless.

A Japanese-style typing sandbox game where you can type japanese words as they explode to powder towards the ground (you can choose several more different powders that react differently). The goal of the game is to type the words as fast as possible while filling the bar up. The more you fill up the bar, the more pixels will be blasted from each letter you type, however you must type faster or else the bar will drain as faster it goes when you get further. The game is similar to Powder Game, but with typing elements added. In my opinion given the elements of this game it's one of the most unique games out there, really love how the creators thought and executed this clever idea for such a simple yet undeniably fun typing game.

This is a challenging game where you drag multiple stickmen to a goal and collecting coins as you try to avoid obstacles on the way and without killing any of the stickmen as possible. You have to be cautious though since you can lose grip if you hold your stickman long enough. There are 8 unique challenging stages that consists of 3 levels each that you need to complete within 99 seconds, however you can play any of them if you'd like. Also keep in mind that the more stickmen you drag at the same time, the faster your stamina drains

Perhaps the one of the most enjoyable games out of all dan-ball games. The goal is simple, kill monsters for coins, and get all achievements if you're hardcore enough. You get to choose four classes, and once you do, sit back and relax while your stickman kills monsters for gold as you progress, this game is combines gameplay elements similar as to Stick Ranger except you don't have to worry about your stickmen getting killed. You can hire more stickman to fight for you the more you get sufficient gold (8 is the max stickmen you can have). There is a spawner box on the middle that spawns heaps of monsters for a certain time, but you can accelerate it by hold-clicking the box. The spawner can spawn four unique monsters at once. Not only you can upgrade stickmen, but you can also upgrade monsters and even the spawner box to be stronger and provide more gold. There is a certain limit though, and you have to limit the number of monsters from reaching the limit or else the game will end, ...more

This is like liquid webtoy and powder game combined, but it is more a blocky version of the game with satisfying physics. There are only six elements and three shapes to choose from and you can adjust the size of the block. You can make a simple house out of powder blocks, and catapult it with a metal block as you watch it get pulverized to multiple miniature blocks. Or you can just spawn a few blocks and mash them together into pieces. It is a simple yet addicting game.

This is the first web game that dan-ball has developed. The goal is to fly your rocket to the goal as fast as possible while avoiding walls. You can collect yellow pixels on the way to get score and accelerate your rocket. There are six stages that you can choose to play for your own liking.

I waste a lot of time playing this Picross/Nonogram clone.

The sequel to its original successor Stick Ranger. The content of this game is quite lacking since it's currently on development stage, but is sure to be another banger from the developers once it's finished.

This seems like a good old basic liquid simulation game at first, but the physics is surprisingly realistic as you drag or splash parts of the water with your cursor. Bonus points for this game being over a decade old. The most intriguing part of this little simulation is that you can sprinkle a bit of painted liquid and see how it blends.