As much hype as there is, I just don't like the concept. One, it is a bit too much to handle. You have these crazy weapons and things to buy that doesn't make sense after a while that you can only get used to if you play for like 5 hours straight. I like a game that I can finish under 40 hours of gameplay (sandbox games like Minecraft or Grand Theft Auto don't count because they don't have a real end). I think a game like Call of Duty, Fallout, or Five Nights at Freddy's are more managable, and you can set dates for when you want to beat them, and you can, if you try. Elder Scrolls V: Skyrim is a good game for people who are into that stuff, but I am not. If you set a date to beat Elder Scrolls V: Skyrim, you won't be able to. It takes like 300 hours of constant playing night through night and true dedication to beat this game, and I am not that type of guy who plays these big long story games, that you can only beat some bosses with one certain way, and you need to farm for the items.

Well, I'm a huge gamer, always have been. Before I found Skyrim, my gaming was pretty basic, like Minecraft. My parents at this time were very strict. No multiplayer games, no blood, yada yada yada. I finally convinced them to let me play Skyrim and it just sucked me in! I spent 8 thousand hours playing this game and never even finished the main storyline, never found all the places. I spent hours and hours just looking around, the sky, the terrain, the magic! If not for Skyrim, I would've never started gaming on a huge scale. If I could only ever play 1 game, it would be this! Even Fallout can't compare!

There is no competition. This is THE BEST Elder Scrolls ever. It may even be the best rpg ever. Amazing graphics, gameplay, story, exploration, characters, setting, customization, and freedom. You have the ability to do whatever you want. You could fish all day, or fight a giant dragon. The choices are endless. You could be a powerful wizard, expert rougue, deadly barbarian, or anything in between. The way you level up is awesome as well. Depending on what you use is how you level up that skill. Then you can spend points on perks for that skill or save those points for another one.

Skyrim was named one of the greatest games of all time and if you have seen this game you know how much of a masterpiece it really is. It is said that it takes over 200 hours to finish the game and including the voice acting and the detail in the world you know the developers worked their ass off to make this perfect.

Please by the game because it will change the way you see games forever with its stunning visuals, voice acting and the amazing story.

Oblivion was the perfect RPG: it was released at the start of the seventh-generation of consoles and thus felt like a next-generation RPG since it showed what the 360 was capable of and featured technical aspects that made the (gorgeous) land of Cyrodiil feel ALIVE. I didn't get that feeling in Skyrim, probably because it was released late into the generation (still a great game, though! ). Oblivion had a spark: exploration was seriously rewarding, quests were varied and memorable, the atmosphere was whimsical and enchanting and the game, as a whole, felt like a second life. Few games can immerse the player into a game world and fewer games can make you feel like you're having the adventure of a lifetime, YOUR adventure. Oblivion kicked this past video game generation with a bang and paved way for one of the longest and best gaming periods of all time. Despite it being 7 1/2 years old, I still consider Oblivion to be the apex of the series and of Bethesda's lineup. If you haven't had ...more

So many memorable moments, whether it be fighting in the arena or pushing the adoring fan off of Dive Rock. I just don't have many of those moments in Skyrim.
Also, Oblivion had the Shivering Isles, which was amazing compared to Skyrim's expansion with the Dragonborn DLC. And who could forget the Dark Brotherhood questline in Oblivion? Skyrim's Dark Brotherhood pales in comparison to this one.
However, Skyrim's combat was vastly improved and the addition of dragon shouts makes it a lot more fun than Oblivion's.

Oblivion is a lot better than Skyrim. Skyrim is nothing without mods. The vanilla version is full of bugs and glitches. The third person camera sucks. The environment isn't good. The quests are boring. The only good thing of Skyrim is it was huge when it came out. Modders actually made Skyrim better. Bethesda didn't do much for Skyrim. Even a 19 years old guy (alexander j. velicky) made more interesting quests than a lot of quests of Vanilla version.

Oblivion was first released in March 2006 for Windows PCs and the Xbox 360. A PlayStation 3 (PS3) release was shipped in March 2007 in North America, and in April 2007 in Europe and Australia. After a number of smaller content releases, a major expansion pack"Shivering Isles"was released. The Elder Scrolls IV: Oblivion Game of the Year Edition, a package including both Shivering Isles and the official plug-in Knights of the Nine, was released in September 2007 for Windows PCs, the Xbox 360, and the PlayStation 3, and was also released on Steam in June 2009. A fifth anniversary edition of Oblivion was released in North ...more

You enter a world, totally alien, forbidding and wondrous. Both the culture of Morrowind and the landscape are unforgiving, secretive and wildly diverse. There are more long quest lines (11) in this game than Oblivion or Skyrim. The quests are interesting and involved. While the landscape is slightly smaller than some it is more treacherous and threatening. It's so easy to take wrong turn during a Dust Storm in the volcanic mountains of Morrowind and end up feeling lost, your resources depleted and in a desperate fight to reach an outpost. I highly recommend it.

This is the best Elder Scrolls game its not really up for debate. The only reason its not number one is because its old and the Skyrim fanboys are to young to have played it.

Morrowind is the best. The world is beautifully crafted. You can tell the devs made this game with a passion and gave attention to every detail. There's an ungodly amount of content. The most unique world in the series. And best of all it is THE PERFECT mix between Old School RPG and Modern RPG. There really never will be another game like Morrowind, since it is the first of its kind and the lovs Bethesda put into developing is unmatched. Oblivion was just copy and pasted together. Skyrim I must admit is Legendary.

I recommend being 21 years old+ when you play this game. Because it doesn't hold your hand and a lot of the ingame systems are a bit complex and deep.

It rubs me in all the right places. This is maybe personal for me only, and I've played through Skyrim and understand that that's also an amazing game too, but this one puts you into a trance that no other game does. In my opinion Skyrim didn't really understand scale. If you were in a tiny town, nobody said it was tiny. It felt like a tiny microcosm of a place, everything was too close together. Of course there are other games that are not dense enough and are filled with empty space. Morrowind hits the balance between these two perfectly. It feels like it's an actual place. And there are tons and tons of surreal, strange happenings, that perfectly piece together the feeling of loneliness that the game wants to convey to you. There's unrest in Skyrim, but that feels like only a side thing that goes on in the background. In Morrowind you really do feel alone. There is no fast travel, no regenerative healing. You're just a wanderer.

Ok, this was a pretty rambly post. All I have ...more

Skyrim may be the best ES game in terms of graphics and gameplay mechanics, but the series' continual trend toward watered-down mainstreaming means that Morrowind is, and likely always will be, the king in terms of content, creativity and exploration. The game doesn't hold your hand, let you fast travel, stick everything in cell phone menus or have characters running up to you to announce that they're questlines (like the Thieve's guild in Skyrim). This is a complex, highly rewarding RPG, something I can't say for the next two games.

Glitchy as hell game, but has an absolutely great character creation.

While tis not the best game in the series by far, Has most content biggest map and by far the best combat.

Screw what others may think, I like the game for what it is.

It does something new

This should be first!

How do you get out of the dungeon? I'm clueless about this game. At least it was free.

Oh, the madness within!

9 The Elder Scrolls IV: Knights of the Nine 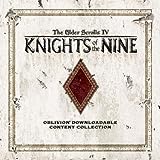