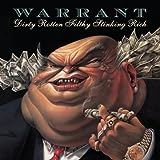 I LOVE glam metal and this album is full of stuff that sounds like Poison, Bon Jovi, Motley Crue and beyond. There are some songs that made it HUGE like Down Boys and Heaven, and other ones that you just HAVE to rock out to like So Damn Pretty and 32 Pennies in a Ragu Jar. IF YOU LOVE GLAM METAL THEN GET THIS ALBUM!

Tracks Cherry Pie-Train Tran are all great songs! The clean version without "Ode To Tipper Gore" which is not even a song is a much better album! Added with the 'bleep' in "Train Train." The album is more heavy than their debut but it still is the best and has glam metal!

This is an album that actually defined Warrant. It's criminally under appreciated and every track is a solid piece placed in the right spot. All my bridges are burning is one of the best songs of the nineties,and it flows right into Quicksand,which is the heaviest song on the album. April 2031 sets a tone like no other,the following tracks consist of a sort of pain and loss. If you haven't listened to this,please do.

This album is their heaviest but its still AMAZING! Machine Gun and The Hole In My Wall are hard-rocking songs! And some of their never forgotten ballads like Let It Rain and Sad Theresa. This album... ROCKS!

Inside out is a classic track and definitely the bands heaviest!

This album released in 1999 was when Warrant got back to their roots! The album is re-recorded songs of the songs that made them big, and a few new songs like The Jones that you have to go wild to! Thank goodness Warrant got out of their 'grunge' sound and made this! Although Jani's voice is a little rough it still rocks!

The main reason why I like this album is because of the song "Stronger Now". It's a great ballad. This album is the album after Dog Eat Dog when they went into a little grunge. I don't know much of the songs but it sounds alright.

This album is when Warrant got really into grunge and it was in the grunge years... I love all the Warrant music with Jani but this album is my least favorite Jani album...

I have to include a live album and all the tracks are great! It has some of their new grunge stuff but other than that it has all of the original glam metal Warrant!

9 The Best of Warrant

I've been trying to do mostly studio albums and that's the only reason why its at #8. This album is great it has just about all my favorite Warrant songs. The last song We Will Rock You (covered by Queen) is an awesome and poweful song. No offense to Queen lovers but this version is SO much better!

The Contenders
11 Under the Influence

Forgot to add it probably between Greatest & Latest and Ultraphobic