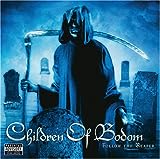 Every track is superb. From the energetic introduction that is "Follow the Reaper" to the epic climax "every time I Die" and the unstoppable, conclusive solo of "Kissing the Shadows", this album is definitely Bodom at their best. Select tracks from other albums are almost as amazing, but as a whole Follow the Reaper is mind-blowing from beginning to end. Best album ever.

Brilliant album from front to back, top-notch production and the quality of instrumentation especially the solos are very memorable...Great piece, very accessible and mainstream but at the same time will be embraced by any ardent fan of Melo Death or Death Metal.

I still can't believe that COB decided to get it after HCDR (with the exception of Halo of Blood)! This album is just epic

All of the songs are hits. This is the CD that took Children of Bodom to the next level.

Hard pick between this and Follow the Reaper, but I consider this their best because they sound truely unique on this one. Follow the reaper is an amazing album too, but already has audible tiny touches of the "new american metal" which CoB developed into at that point. Everything about Hatebreeder is outstanding. Amazing compositions, Malmsteen-ish shreds, hooks you will never forget.

We can all say that COB make very very good albums. Hard to choose a number one. If I could I would have all of them at 1. They are all so amazing from Alexi's amazing guitar, vocals and fantastic song writing skills to Janne's incredible pianist skills.

This album has all you need to get into the CoB experience... great music, vocals, neo-classical shredding and stunning melodies...

Every song is perfect. From the inspired keyboard on needled 24/7 to the swagger of sixpounder. The brilliance of hate crew deathroll and the melodic death anthem which is angels don't kill. A true cob classic

Love every bit of music given to their Fans by them. Specially angels don't kill and hate crew deathroll!

Has some of Bodoms best known songs in it like Angels don't kill, Needled 24/7, bodom beach terror and sixpounder

As a black metal fan I love the intensity and darkness of this album! It is less power metal(ish) than all the other albums. The keyboard stands out a lot more (which is great) and Alexi's vocals on this one are by far the best (and the most black metal! ). It sounds like a really dark, technical, groovy, neoclassical, melodic black/death metal hybrid (I don't really know how to describe it). To me this is one of their best (I can't believe Alexi likes this one the least just because he copied his idol). By the way, Deadnight Warrior is an amazing opening song!

Masterpiece of the Finnish Metal. Back in the days when COB had their own sound and atmosphere. Quintessence of Neoclassic, Black, Power and Melodic Death Metal! I loved this keyboard and vocals, everything in this album is generating an occult atmosphere.
"Lake Bodom" is my favorite song by far, and it's got me into Metal.

Funny, I know cob for more then 3 years.
Every day or a week or so. I discover something new.
Even today.

This album is so melodic, it is stuck in my head for ever. I don't need an mp3 player anymore.

Hard and melodic. Warmen did a great job with this album
The best song is "In the Shadows". Children of Bodom

5 Are You Dead Yet

Never actually mentioned as Children of Bodom's best album. I think this really is the best - just look at the three first tracks, simply brilliant songs. In addition to them, singles In Your Face and Trashed, Lost & Strungout it already makes a great album. Even the album fillers are very good. Overall, these songs create amazing experience while listening the whole album through.

Are you dead yet, in your face, punch me I bleed, thrashed lost and strungout are all really good songs there is probably only 1,2 other albums with this many good songs in it in my opinion. This should be number 1.

In my opinion AYDY and Hate Crew Deathroll are by far their best albums. Each song is totally awesome, true melodic sound, incredible solos, I can listen to it everyday.

Oldschool without sounding old! The perfect Melodic Death dosis, and clearly on of their bests!

This is a really good album. I think it is better than Blooddrunk, Halo of Blood, but not as good as the early stuffz. I like it.

All for Nothing and Prayer for the Afflicted are masterpieces!

I Worship Chaos is better than Halo of Blood, Blooddrunk, Relentless Reckless Forever and Are You Dead Yet

Should be 4th
by the way awesome album. If you like old cob then you'll like this. Or if you like new cob you'll also like this. Cob knocked it out of the park on this album. It's better than Something Wild, Bloodrunk, Rentless Reckless Forever, Halo of Blood, and I Worship Chaos. It does have it's odd moments but it works and it's awesome. 10/10 rating without a doubt.

Not their best, but is a beautiful album worth listening in the cob collection. The real problem here is that the first part is very intense with very structured songs, the second one is a little bit off, but still good.
Overall, the did a masterpeace!

Hexed is a favorite along side Something Wild...in Hexed can see the reaper face which some been waiting on for a while.

The only reason it's this low because it's a newer release. Top 3 for sure.

This album is too much sports advertissing I don't know why lol! Its not the actual beats of Children Of Bodom and songs are really different. It feels like is Metallica in Load, RELoad, St. Anger albums, the same thing.

Not their worst not their best I like the title track, one day you will cry, and tie my rope besides that I don't really like this album that much

The Contenders
11 Skeletons in the Closet